On 40th anniversary of their killing, missionaries of El Salvador remembered for their political witness as much as their faith 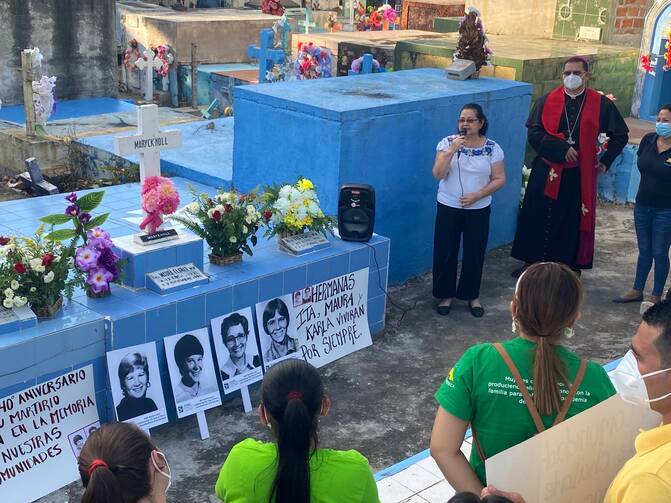 A group of pilgrims gathers near the tomb of Maryknoll Sisters Ita Ford and Maura Clarke Dec. 1, 2020, the eve of the 40th anniversary of their assassination in the Central American nation. Along with Ursuline Sister Dorothy Kazel and laywoman Jean Donovan, the Maryknoll sisters helped children and civilians find refuge but were subsequently raped and assassinated by military. Even with the COVID-19 pandemic, small groups stopped by with music and flowers to remember the U.S. Catholic women as "martyrs." (CNS photo/Rhina Guidos)

Cardinal Michael Czerny, S.J., marked the 40th anniversary of the martyrdom of four American missionary women in El Salvador on Dec. 2 with a memorial Mass in Rome. Ursuline Sister Dorothy Kazel, lay missionary Jean Donovan and Maryknoll Sisters Maura Clarke and Ita Ford were brutally murdered by Salvadoran National Guard members on Dec. 2, 1980. Mourning their violent deaths and testifying to lives spent working for justice, Cardinal Czerny cited the testimony of the Rev. Gregory Chisholm, a Canadian missionary who had met two of the women on the day they were murdered.

According to Father Chisholm’s testimony, after meeting Kazel and Donovan at the airport in San Salvador, he and his companions departed in a mini-bus that was identical to the one the women would soon use to leave the airport. He remembers that Salvadoran National Guard members stopped his group, refusing to let them leave until they proved that they were Canadians, not Americans. He said that not long after that encounter, those same heavily armed men stopped the women’s vehicle and forced them to an isolated location where they were assaulted and executed.

Father Chisholm and his group later came upon the women’s abandoned bus. They learned shortly after that their bodies had been disposed of in a shallow grave.

“Theirs, mysteriously but without doubt, is the triumph because vigorous, courageous acts of solidarity and compassion persist in dreadful, risky conditions.”

Cardinal Czerny’s homily was grounded in the hopeful words of the prophet Isaiah: “If I should walk in the valley of darkness, no evil will I fear.” Five members of the national guard were convicted of killing the women, but those who may have ordered or attempted to cover up the murders were never brought to justice. Even though the circumstances of their deaths were horrifying, the cardinal suggested that the martyrs still got the better part: “Theirs, mysteriously but without doubt, is the triumph because vigorous, courageous acts of solidarity and compassion persist in dreadful, risky conditions; brutal claims failed and fail to stop the evangelizing.”

Remembering the many communities around the world who are celebrating the lives of the women on the 40th anniversary of their deaths, the cardinal closed his homily by saying that “we join together today, mournfully to remember the passage of Jean, Dorothy, Ita and Maura through the valley of darkness and gratefully to celebrate the triumph of their faith and goodness and God’s infinite mercy.”

According to Father Chisholm, in its response to the incident, the recently elected Reagan administration in the United States took a dismissive approach to the crime, questioning aspects of the missionary women’s encounter with the Salvadoran Guard members. Jeane Kirkpatrick, soon to be Reagan’s ambassador to the United Nations, denied that the Salvadoran military had played a role in the killings, saying, “The nuns were not just nuns. They were political activists.”

“You can learn from the local people if you are willing to listen and be led by the local people.” These four missionary martyrs in El Salvador were a powerful example of that.

Father Chisholm told America that his group was “privileged in one sense because we were able to act as witnesses, to give a bit more clarity on what really happened. Because we saw the scene, we were able to dispel any lies that came up later about what happened.”

A missionary in Peru for several decades, Father Chisholm’s experiences around the world have affected his approach to ministry. “You can learn from the local people if you are willing to listen and be led by the local people.” These four missionary martyrs in El Salvador, he said, were a powerful example of that.

Eileen Markey, author of the biography A Radical Faith: The Assassination of Sister Maura, spoke to America about how their work made the missionary women targets of the Salvadoran military. Documenting human rights abuses, bringing food, supplies and eventually government-banned medicines to people perceived as enemies by the military and transporting people in danger past military checkpoints, Sister Maura Clarke’s short time in El Salvador was filled with dangerous work.

“They didn’t see their lives as more valuable than those of the Salvadorans. They saw themselves as being in communion, part of a movement with the Salvadoran people."

Ms. Markey said that the four women were very aware that their work could put them in harm’s way. “People they loved were getting killed all the time,” she said, referring to other church leaders, activists and community members whose vision for a more just El Salvador made them targets. In the days leading up to their deaths, the four women received a series of death threats, including a sign on their parish hall door suggesting that everyone who lived inside was a communist and depicting a bloody execution.

“We remember their killing as an outrage and an aberration. In a way, that’s exactly backward,” Ms. Markey said. “They didn’t see their lives as more valuable than those of the Salvadorans. They saw themselves as being in communion, part of a movement with the Salvadoran people. The military agreed, and that’s why they killed them like Salvadorans.”

Ms. Markey acknowledged the far-reaching impact of Kirkpatrick’s comment that labeled the women political activists, used, in this case, as a form of slander. Many who knew and loved the missionary women attempted to refute that implication, suggesting that the four missionaries were not in fact political but simply good women who wanted to show generosity to oppressed people in a time of crisis. Ms. Markey believes that as a result the reality of the missionary women’s organizing for social change has been “muted.”

“It allowed us to be skeptical of movements,” she said. Suspicion of social movements that have been organized in contemporary times, she suggested, has come about “partly because we have neutered the power of this witness.”