The U.S. bishops need a better public response to the McCarrick Report 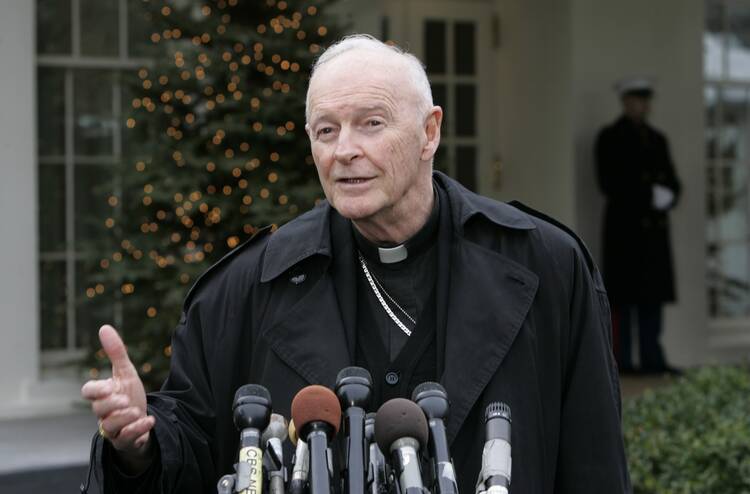 Then-Cardinal Theodore E. McCarrick of Washington speaks with the media at the White House in Washington in this Dec. 1, 2005, file photo. (CNS photo/Bob Roller)

During their fall general assembly earlier this week, the U.S. bishops spent only about 45 minutes of the public portion of their meeting discussing the McCarrick report, which the Vatican released just days beforehand. (Before the public portion of the meeting, they also discussed the report privately in an executive session.) Other than a brief remark that the National Review Board, a body of laypeople who advise the bishops on their response to the abuse crisis, would review the report, the bishops did not take, announce or vote on any other public action in response to it.

I would say this is a scandal and a shock, but since I have been following and writing about the bishops’ conference’s response to the abuse scandal over the last two years especially, I am not surprised. The problem is not that the bishops are ignoring the report; many put out solid individual statements after it was published and Archbishop José Gomez, the president of the conference, did as well. Rather they have failed, as a body, to find a public way to communicate to American Catholics that they are taking this report seriously and are ready to make changes in response to it.

The bishops have failed to find a public way to communicate to American Catholics that they are taking this report seriously and are ready to make changes in response to it.

This pastoral failure regarding communication was also the problem two years ago, when the bishops were caught flat-footed by a Vatican directive not to vote on their proposals for responding to the sexual abuse crisis in the immediate aftermath of the Pennsylvania grand jury report and McCarrick revelations in 2018. While the delay of the vote was, in retrospect, reasonable (the Vatican was already at work on new legislation and procedures that were released in May 2019), the communication about the Vatican intervention at the time was tragically opaque, and it made it seem as if both the U.S. bishops and Rome were simply doing nothing when the church was on fire.

As I wrote at the time, though it is understandable that the church cannot structure all of its operations around the limits of of the news cycle and headlines,

for the U.S. church, reports in the American media that arrive at a 21st-century pace are how the majority of the faithful find out both about the church’s failures in the sexual abuse crisis and its halting attempts at reform. The failure to acknowledge and plan for that situation is a pastoral failure. It causes real harm and scandal among the faithful; it weakens trust that has already been damaged and betrayed by the failures of church leaders time and time again.

One prelate who spoke during the most recent bishops’ meeting, retired Bishop Michael Pfeiffer of San Angelo, Tex., described this challenge, saying that many laypeople would pick up more about this topic from the secular media than from the church. He argued that the bishops need “to say something more as a conference about how we see this issue, humbly admitting the mistakes that were made.” He also expressed his hope that the conference would “issue some kind of report” from this meeting, rather than waiting until next year’s meeting to address these issues as a body. Sadly, that hope received no further public discussion and resulted in no action at the meeting.

I do not have any panacea to propose. There is no one obvious action for the U.S. bishops to take in response to the McCarrick report. Some of the suggestions made by bishops speaking up during the public portion of this week’s meeting, particularly regarding a more public vetting of candidates for appointment as bishops, would require action from Rome. Others, such as the recommendation that the recipients and amounts of monetary gifts from McCarrick be publicly disclosed, are possible to begin at the U.S. level while making a recommendation to Rome for further transparency. Still others, such as the call for more fraternal concern and, when necessary, correction between and among bishops, are important exhortations that do not require a conference vote to implement.

Even the good things that the bishops might intend to do in response to the McCarrick report are largely invisible to the Catholic faithful.

But discussion of these proposals has barely made it even into the Catholic media—and as far as I know, no secular media coverage has discussed them at all. Even the good things that the bishops might intend to do in response to the McCarrick report are largely invisible to the Catholic faithful.

And even dedicated followers of church news who watched the entire livestream of the meeting would not emerge with an overall hopeful picture. There were also bishops who spoke to express dismay at the degree of McCarrick’s deception, rather than how easily deceived other bishops were; to argue against media reports imputing fault to John Paul II because it was “reasonable” for him to believe McCarrick’s letter on the advice of his counselors; and to point out that because McCarrick’s sins were a violation of clerical chastity and homosexual acts, they would still be sinful even if they had involved “consenting adults.” The net impression of these sorts of interventions is something like standing in the ashes of a burned-down house, wondering about how better smoke detectors might have helped instead of asking why the fire department had arrived, looked around and driven back to the station without putting out the fire.

Wondering about why no one found or fought the fire despite all the smoke is exactly what Catholics are doing in the wake of the McCarrick report. Thus far, most of them feel like they are asking that question alone, without the help or even the acknowledgment of their bishops.

The church needs for bishops to be more courageous pastors, engaging directly and publicly with the anger, frustration and hurt of the people in the pews.

Beyond any policy or process fixes about the formation of seminarians or the selection of bishops, what the church needs is for bishops to be more courageous pastors, engaging directly and publicly with the anger, frustration and hurt of the people in the pews.

In the 21st century, perhaps especially in a time of pandemic when even an annual bishops’ meeting has to be conducted via livestream, that pastoral courage needs to be demonstrated publicly. It cannot simply be discussed among bishops talking to each other but needs to be brought into being in the shared public life of the church. Doing that requires a media strategy and a public relations plan. It needs, bluntly, to make headlines, even if it will never command as much front-page real estate as McCarrick’s failures have.

This is not a recommendation that the church try to “spin” the McCarrick story—far from it. It is simply an acknowledgment and a lament that in the sex abuse crisis, the church’s failure has been far more public than its repentance, no matter how sincere. It is the Gospel that gives us the courage to confess and repent of our sins in allowing the abuse crisis to fester. That same Gospel should also embolden us to figure out how to proclaim our commitment to reconciliation loudly enough that people can hear it and begin to believe us again.