Christ’s lessons for a nation in a power struggle

Christ’s lessons for a nation in a power struggle 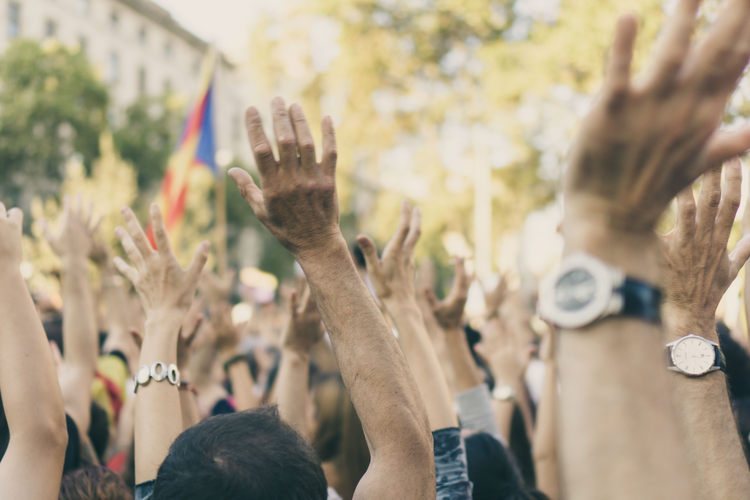 Photo by Chris Slupski on Unsplash

A Reflection for the Feast of Christ the King

We close another year of the church’s life in Christ while witnessing a transfer of power in the United States. Governments, whether monarchies or democracies, must employ power. Power is an essential part of ruling. The notion of power itself is positive. We need power to do things, whether that is running our engines or healing our environment. Power takes on a negative hue when we are on the wrong side of its application, when we see it as employed against us.

Eventually, power is always transferred, peacefully or not, according to our preferences or not. This is what elections do in healthy democracies. They peacefully transfer power, and partisans never gain or lose as much influence as they expect.

Democracy flowered in ancient Greece before the time of Jesus, but in calling him king, the nascent church applied a more ancient understanding of leadership. “Messiah,” from the Hebrew, or “Christ,” from the Greek, means the anointed one, referring to a ritual that designates a monarch. We call Jesus the Christ, the one who wields power.

Jesus rules by not ruling. He receives all power by rejecting the use of power itself.

Yet on the Feast of Christ the King, we are confronted with an irony only the divine could devise. Jesus did not come in power. He became the Christ, the anointed one, because he surrendered what little he had into the hands of the Father. Jesus rules by not ruling. He receives all power by rejecting the use of power itself.

St. Augustine extended this divine irony to the life of the church. God allows her to be publicly weakened so that her Christological character alone might be her constant. The church of Christ does not rule like an emperor or teach like a sage. Socrates had no political power, yet knowledge itself is power. The church cannot even claim this. Save in the Spirit, her oratory is hollow. In the words of St. Augustine:

Our Lord Jesus Christ wished to crush the necks of the proud, and so he did not seek a fisherman through an orator; but by means of a fisherman gained an emperor. Cyprian was a great orator, but he is outranked by Peter the fisherman, through whom, later on, not only an orator but even an emperor came to believe. No one of noble birth, no learned person was chosen first; because God chose the weak things of the world in order to put the strong to shame (Homilies on the Gospel of John, 7.17).

We come to rule ourselves, the only sovereignty that guarantees happiness, when we give power back to God.

What applies to the entire church applies to each of us as disciples. In our relationship with God, everything is given to us in our act of surrender to the Father. To relinquish is to receive. We come to rule ourselves, the only sovereignty that guarantees happiness, when we give power back to God.

Moreover, we find Christ and his kingdom, we take our place by his side, when we look to the powerless, when we attend to them, when we throw in our lot with them.

The king will say to them in reply,

“Amen, I say to you, whatever you did