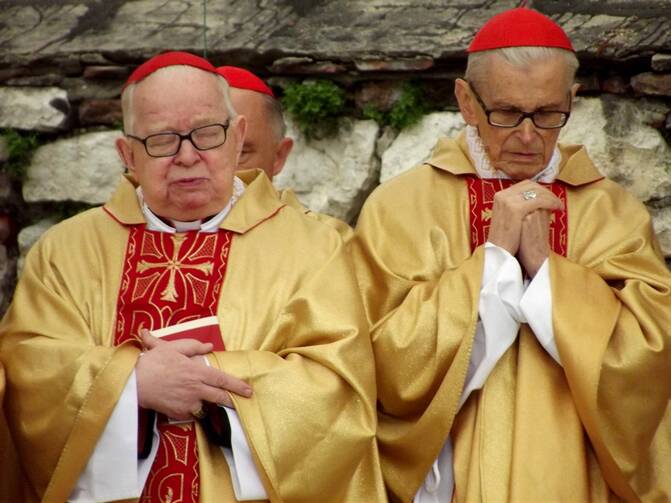 WARSAW, Poland (AP) — The Vatican has imposed sanctions on a prominent Polish cardinal, retired Archbishop Henryk Gulbinowicz, after he was accused of sexually abusing a seminarian and of covering up abuse in another case.

The Vatican's embassy in Poland said Friday that Gulbinowicz, the 97-year-old retired archbishop of Wroclaw, has been forbidden from using his bishop's insignia and participating in any religious celebrations or public events. The once well-respected cardinal has also been denied the right to have a cathedral burial service or to be buried in a cathedral.

He is the latest Polish prelate to be sanctioned after a Vatican-mandated investigation into allegations of sexual misconduct. The reckoning has rocked the Catholic hierarchy in the predominantly Roman Catholic Poland, where the clergy have long been held in high esteem and St. John Paul II, the Polish pope, remains a figure of national pride.

The embassy's statement said the decisions were taken following an investigation into accusations made against Gulbinowicz and other allegations concerning his behavior.

Last year, criminal prosecutors in Wroclaw opened an investigation into allegations against Gulbinowicz of sexual abuse of a seminarian, but they dropped the case because too much time had passed. Gulbinowicz was also cited in a recent video documentary in Poland about predator priests and coverup efforts.

More stories from America
– The Editors: The Catholic Church should not be shocked by the McCarrick case—it should be ashamed.
– Who knew whatabout former Cardinal Theodore McCarrick?
– Podcast: How did McCarrick get away with abuse under three different popes?
– I was educated by abusive priests. What should I do with the gifts they gave me?