Why do Catholics pray to saints? 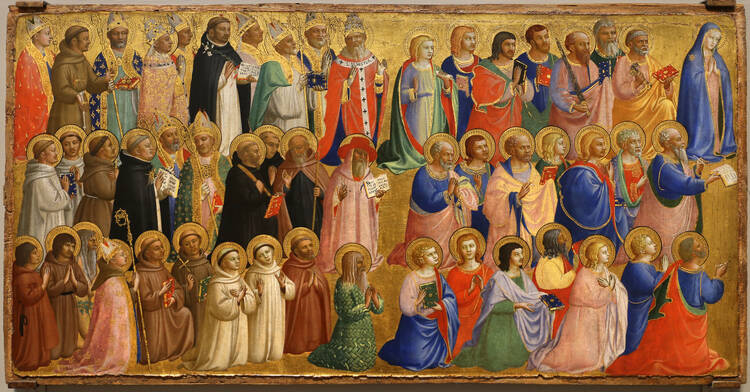 The Forerunners of Christ with Saints and Martyrs, Fra Angelico (Wikimedia Commons)

A Reflection for the Solemnity of All Saints

St. Clare of Montefalco is not as well-known as her predecessor, St. Clare of Assisi, but at the time of her death in 1308 she was just as beloved by the Augustinian sisters, whose abbess she had been for 18 years. Clare told them that Christ was in her heart.

Of this she had been particularly insistent as her health declined, often pronouncing that she felt him in there, nourishing her. So when, after her death, Chiara’s body seemed miraculously to resist the intense heat of Italy in August, refusing for a full five days to decay, rot or succumb to even the slightest malodorousness, the sisters decided to take their abbess at her word. They cut her open, removed her heart and put it in a box.

Jack Hartnell follows up on Clare of Montefalco’s heart in his fascinating study Medieval Bodies: Life and Death and the Middle Ages (2019): “Blackened over time, it is still preserved without rot or decay.”

So far, not such an unusual story about the saints, but what follows is quite singular. The day after Clare’s heart was encased, one of her most devoted daughters, a Sister Francesca,

felt compelled to return to the box. For some reason she was not satisfied by the first impromptu post-mortem and, intent on searching ever deeper inside Chiara’s increasingly holy remains, she cut the heart in two with a razor to examine its contents. It was at this moment that Francesca realized that the sisters’ searches were to have deep spiritual reward. Inside the heart she found a tiny sculpted image of Christ on the cross and, alongside it, a whole collection of miniature objects associated with the Passion, from the nails hammered into Christ’s body and the whip of his flagellation to the lance of the soldier Longinus which had pierced deep into the crucified Christ’s side. But these miniatures were not crafted from traditional artist’s materials, from metal, wood, ceramic, or ivory. They were wrought from the flesh of Chiara’s heart itself.

How would we explain this medieval autopsy today? It is a good question, but perhaps a better one is asking how Clare’s sisters understood what had happened. What did Sister Francesca’s discovery mean to them? Even in a scientific age, might it not mean the same to us? Is there a lesson in the legend?

The sisters were convinced that a saint had lived among them in Montefalco. The strength Clare had shown in her dying had only added to their surety. Later, at the time of the Reformation, a concern would arise that the cult of saints might occlude our comprehension of Christ. They might become minor yet rival deities. After all, what would, or could, a saint do for us that Christ himself does not?

Why might you find yourself praying to your deceased grandmother rather than to Christ? Because in your story she is another Christ, not an alternative Christ.

But the veneration of saints did not arise from a desire to corral Christ’s power. It came from a deep conviction that it is possible for us to be completely conformed to Christ. The grace he brought into the world can even today, in every place, reconfigure Christ into a constellation of men and women who have so conformed their lives to his as to be indistinguishable in character yet utterly diverse in chronicle.

“Indistinguishable in character.” There is only one will in heaven. Christ himself submits to the will of the Father, as do all his saints. “Utterly diverse in chronicle.” Why might you find yourself praying to your deceased grandmother rather than to Christ? Because you sat in her lap, because her voice and limbs once comforted you, because in your story she is another Christ, not an alternative Christ.

Beloved, we are God’s children now;
what we shall be has not yet been revealed.
We do know that when it is revealed we shall be like him,
for we shall see him as he is (1 Jn 3:2).

In the saints, especially the loved ones who have gone before us, we profess Christ as the utterly singular act of God. He comes among us so that we and the cosmos might be configured to him. “Christ” means “the anointed one.” How can he be the chosen king if he does not rule over a multitude of holy ones who are utterly conformed to him, completely submissive to the Father, yet wondrously distinct in their own chronicles?

After this I had a vision of a great multitude,
which no one could count,
from every nation, race, people, and tongue.
They stood before the throne and before the Lamb,
wearing white robes and holding palm branches in their hands.
They cried out in a loud voice:
“Salvation comes from our God, who is seated on the throne,
and from the Lamb” (Rev 9:10).

More stories from America:
– Blessed Carlo Acutis watched ‘Pokémon.’ That’s my kind of saint.
– Treating saints like superheroes is a dangerous game.
– Emmett Till’s faithful mother is the saint we need in the fight for racial justice
– Joan of Arc has been a saint for 100 years. Her exploitation continues.