Archbishop Tomasi has led the Vatican’s fight against nuclear weapons. Pope Francis is making him a Cardinal. 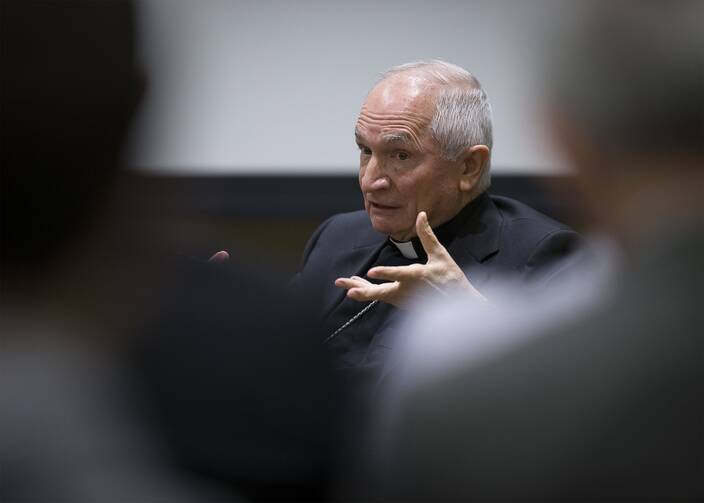 Sunday Oct. 25 was a double red-letter day for Silvano Maria Tomasi, C.S. Honduras had ratified the Treaty on Prohibition of Nuclear Weapons the day before, hastening a global nuclear weapons ban into force in January 2021. Helping shepherd that treaty through the United Nations had been one of the highlights of Archbishop Tomasi’s diplomatic career.

Then at his noon Angelus meeting, Pope Francis announced the elevation of Archbishop Tomasi and 12 others as cardinals. Cardinal-elect Tomasi, a naturalized American citizen, was one of two Americans added to the college of cardinals, with Cardinal-elect Wilton Gregory of Washington. That announcement in combination with the treaty’s advancement was a moment of serendipity, the crowning of a rich career.

Among many international bodies joined by Archbishop Tomasi in a varied and vigorous career in diplomatic service to the Holy See were the United Nations Human Rights Council and the Conference on Disarmament. The U.N. Human Rights Council was the scene of many of the nuncio’s most important interventions on behalf of the rights of children and indigenous and migrant people, the right to development, in condemnation of human trafficking and in defense of a safe and healthy environment.

The council was also the site of the most difficult moments of his tenure as the Holy See’s permanent observer to the United Nations and other international agencies in Geneva, addressing the church’s flawed response to the sex abuse crisis and facing the harsh judgments of the council and its members.

It was with his colleagues in disarmament dialogues that he found the signature issue of his last years in diplomatic service, nuclear weapons abolition.

Beginning in 2013, Archbishop Tomasi led the Holy See delegations to a series of international meetings on the humanitarian consequences of nuclear weapons that prepared the way for “the ban treaty.” After the U.N. conference had adopted the treaty, he worked with Cardinal Peter Turkson to prepare a Vatican conference to mark its passage. Before an audience of Nobel Peace Prize laureates, diplomats, civil society leaders and church peace activists, Pope Francis declared of nuclear weapons, “the threat of their use, as well as their very possession, is to be firmly condemned.”

It was with his colleagues in disarmament dialogues that he found the signature issue of his last years in diplomatic service, nuclear weapons abolition.

In a follow-up to the conference, Cardinal-elect Tomasi wrote, “The Holy See supports an effective dialogue with nuclear weapons states, whose commitment remains crucial for further substantive achievements in nuclear arms control and disarmament.” (Georgetown University Press has published the papers of the 2017 symposium in A World Free from Nuclear Weapons: The Vatican Conference on Disarmament.)

In retirement, Archbishop Tomasi became a trusted adviser and problem-solver for Pope Francis. In 2015, the Holy Father assigned him to fold in the Pontifical Council for Migrants and Itinerant Peoples with two other Vatican offices, Justice and Peace and the papal philanthropy Cor Unum, into a single superagency now known as the Dicastery for Integral Human Development.

Word is that the pope told him, “You have full authority,” but in keeping with Italian employment law, “You may fire no one.”

Among his other troubleshooting assignments, in 2017 the archbishop supervised the reform of the Order of Malta after its Grand Master resigned in scandal. Vatican insiders gossip that as Pope Francis observed Archbishop Tomasi working to reorganize the notoriously resistant Vatican Curia, he quipped, “Why didn’t I hear of Tomasi before?”

Cardinal-elect Tomasi was born in Cassone di Mussolente, Italy, in 1940. He studied sociology at New York’s Fordham University under the late Jesuit sociologist Joseph Fitzpatrick, and from 1970-74 he taught at the City University of New York and the New School for Social Research.

In keeping with the charism of the Scalabrini Fathers, founded to serve Italian immigrants, the cardinal-elect spent much of his early ministry working with migrants and refugees. He has also maintained an academic interest in the church’s role in migration. An early book was Piety and Power: The Role of Italian Parishes in Metropolitan New York, 1880-1930. At the time of his elevation to the cardinalate, Archbishop Tomasi was working on a book on the correspondence of St. Charles Scalabrini and St. Francis Xavier Cabrini, both apostles to the world’s migrants.

Church Asks If It's Time to Ban the Bomb
Kevin Clarke

With his brother Lydio, also a Scalabrini priest, Father Tomasi helped found the Center for Migration Studies in New York and the International Migration Review. From 1983 through 1987, he served as director of the Office for the Pastoral Care of Migrants, Refugees and People on the Move at the U.S. bishops’ conference. In addition to migrants and refugees, that office served those in migratory occupations, like merchant sailors and carnival workers, and itinerant peoples like the world’s Roma.

In 1989, Pope John Paul II appointed him secretary of the Pontifical Council for Pastoral Care of Migrants and Itinerant Peoples. In 1996, Pope John Paul transferred Bishop Tomasi to the Vatican diplomatic corps, naming him apostolic nuncio to Ethiopia and Eritrea with the rank of archbishop. After moving on from Addis Ababa, he maintained his pastoral ties to the church in Ethiopia, helping the local bishops found the Ethiopian Catholic University of Thomas Aquinas and raising funds for its support.

In 2003, Archbishop Tomasi moved to Geneva as the Holy See’s permanent observer. In a collection of his statements in that position, The Vatican in the Family of Nations, he explained, “The Holy See exercises ‘soft power’ diplomacy, namely a diplomacy which does not depend on military, political or economic strength, but on the ability to persuade. The Holy See...acts as a voice of conscience, at the service of the common good.”

Much the same can be said of Cardinal-elect Tomasi.

Drew Christiansen, S.J., former editor in chief and president of America, is Distinguished Professor of Ethics and Global Development at Georgetown University and a senior research fellow at the Berkley Center for Religion, Peace and World Affairs. He contributed to two volumes Cardinal-elect Tomasi published on immigration policy and for the last seven years collaborated with him on his work for nuclear disarmament.