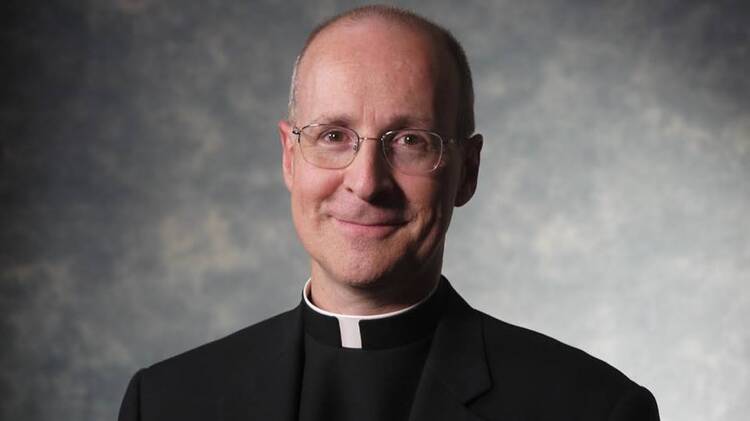 On April 12, Pope Francis appointed James Martin, S.J., America's editor at large, as a consultor to the Vatican's Secretariat for Communications.

The pope created the new secretariat on June 27, 2015, which consolidated all existing Vatican communications offices and operations under one department. Msgr. Dario Edoardo Viganò, formerly the director of the Vatican Television Center, was made its first director.

"I'm very happy to serve the church in this new way," Father Martin said upon learning of the appointment.

"I learned of the news early this morning, when Josh McElwee of The National Catholic Reporter and Cindy Wooden of Catholic News Service contacted me via Twitter to congratulate me. And given the importance of social media in the church today, that's a good way to find out good news.”

The secretariat is responsible for Vatican Radio and the Vatican Television Centre as well as the Holy See's website and the pope's Twitter handle, @Pontifex.

Pope Francis releases message for journalists on their patron saint’s feast day
Cindy Wooden - Catholic News Service
In an interview with America earlier this year, Msgr. Viganò spoke about the principles guiding reforms to the Vatican's communications system under Pope Francis. “Christianity is not an idea,” he said. “It is an experience within a people in a given land and must relate to the cultural, social and communicative context in which it finds itself. And since today the system of communication is strongly digital, it must connect to that.”

Two other Americans, Michael P. Warsaw, chairman of the board and chief executive officer of EWTN Global Catholic Network, and Ann Carter, co-founder of Rasky Baerlein Strategic Communications, were also appointed to the secretariat.

Appointment of Consulters of the Secretariat for Communication

Great news! Pope Francis is making some solid appointments. Can Stephen Colbert join as an advisor?

I assume you will still be an author here.

God Bless you in your new ministry.