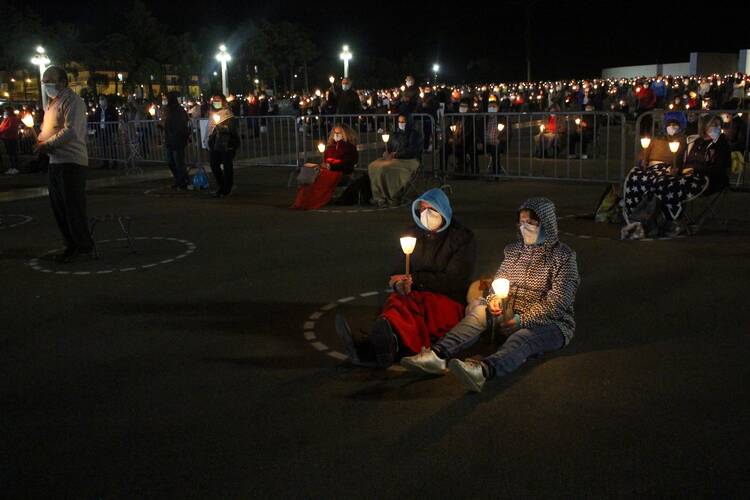 At the 103rd anniversary Mass marking the final apparition of the Blessed Virgin Mary to three pilgrim children at Fatima, Bishop José Ornelas, S.C.J., of Setúbal, Portugal, called for a “change of paradigm.”

“Valuing the role of women,” he said, “contributes decisively to the appreciation of ministries in the church today, overly focused on the ordained ministries.” This call by the head of the Portuguese bishops’ conference echoed Pope Francis’ message after the Angelus on Oct. 11, in a rain-soaked St. Peter’s Square.

“We must promote the integration of women in the places in which important decisions are taken,” the pope told those gathered under umbrellas at the Vatican, reminding them that this is his prayer intention for October.

Catholic women theologians said that they were tired of hearing words promoting women in the church without accompanying actions that place women in the clear leadership roles.

“Let us pray that, by virtue of baptism, the lay faithful, especially women, may participate more in the institutions of responsibility in the church, without falling into the clericalisms that nullify the lay charism and also tarnish the face of Holy Mother Church.”

In a typical year, hundreds of thousands of pilgrims come to the Sanctuary of Our Lady of Fatima from across the world for the October pilgrimage. But this year, the pandemic frustrated many pilgrims’ plans, and fewer than 6,000 people were at the Mass on Oct. 13.

Addressing the congregation in the sanctuary plaza, socially distanced in clearly marked white circles, Bishop Ornelas emphasized the need to offer women real opportunities for leadership in the church and not merely to fulfill the traditional roles assigned to them.

“Accentuating the feminine and the maternal is not simply seeking a balance of powers or influences in the operational organization of the church,” he said. “It is about a change of paradigm: Ecclesial leadership is not founded on the idea of power but in life, care and service, using the gifts of the Spirit in the edification of the Lord’s house, which comes from the paternal and maternal love of God.”

But some Catholic women theologians, asked to comment on the pope’s post-Angelus message and the bishop’s call for the greater participation of women, said that they were tired of hearing words promoting women in the church without accompanying actions that place women in the clear leadership roles.

“Women are running out of patience,” Natalia Imperatori-Lee, a professor of religious studies at Manhattan College in New York, said in an email to America. “Both of these statements rely on the notion of complementarity, an ideology of gender espoused by the Vatican that determines women’s roles in church and society (and men’s) based on their biology,” she said.

“In addition to praying for women’s inclusion in church leadership, the hierarchy and clerics at all levels should commit to action that brings women into decision-making roles.” And not only in matters that relate to education and family but all ecclesial matters, Dr. Imperatori-Lee suggested, but “at every level: the parish, the diocese, the national/regional bishops’ conferences, etc.”

As long as women are being defined by a role, she said, “in this case: maternity, complementarity, service,” the church will completely miss the fullness of women as the image of God.

At Fatima, reflecting on Mary’s importance to the church, Bishop Ornelas noted her primacy alongside other women in the early church, “present from the mission of Jesus and the beginning of the church,” he said, “not as a secondary fact or subsidiary to male protagonism, but as an important element constitutive of the church.”

Maria Clara Bingemer, a professor of theology at the Pontifical Catholic University of Rio de Janeiro, Brazil, praised the bishop’s emphasis on “not only Mary but all the women who appear in the Gospel close to Jesus,” but, commenting by email, she added, “The attitude of Jesus with women is a revolution still ignored.”

“This attitude was not well incorporated in our church. Pope Francis’ recent declarations give testimony to that.”

While Dr. Bingemer appreciated the bishop’s effort to recognize the closeness Jesus had to women, other theologians suggested that the bishop’s portrayals of some women in the Bible were at odds with his intention to highlight their importance.

In his homily, Bishop Ornelas offered a litany of women in the Bible, recalling the “affectionate perfume of the sinner poured out on Jesus' feet; the small but generous coins of the poor widow...the silent attitude of the adulteress, condemned in the public square in the name of the law, ready to be stoned...the sisters Martha and Mary, experts in administration, service, and kind and welcoming hospitality in the house that welcomes Jesus and his disciples.”

“The gifts and skills of each one of them, men and women, can be placed at the service of all,” Bishop Ornelas said.

“It is profoundly problematic to characterize women in these terms,” said Cecilia González-Andrieu, a professor of theology at Loyola Marymount University in Los Angeles, California. “It reinforces the paradigm” instead of changing it.

She added: “The idea that there is such a thing as a feminine presence is really reductive. It represents women as having one set of characteristics that have been prescribed for us—to describe us as if we are just like a little character in a play that has no freedom.

“The change in paradigm has to be enormous,” she added, “but it’s not impossible because it’s all in Scripture. All we have to do is just look at it with clear eyes, without all of these built-up prejudices that we had in the past because of the whole language of complementarity.”

In Fatima, inviting pilgrims to draw inspiration from Mary, Bishop Ornelas ended his homily. “As a faithful, loving and innovative Mother,” he said, “she teaches us the courage to dare, not to make faith into an exhibition of museum pieces, [but] to have the pleasure and the patience to sow and hope that the Kingdom of God has time to grow and bear fruit to satisfy the world's hunger.”