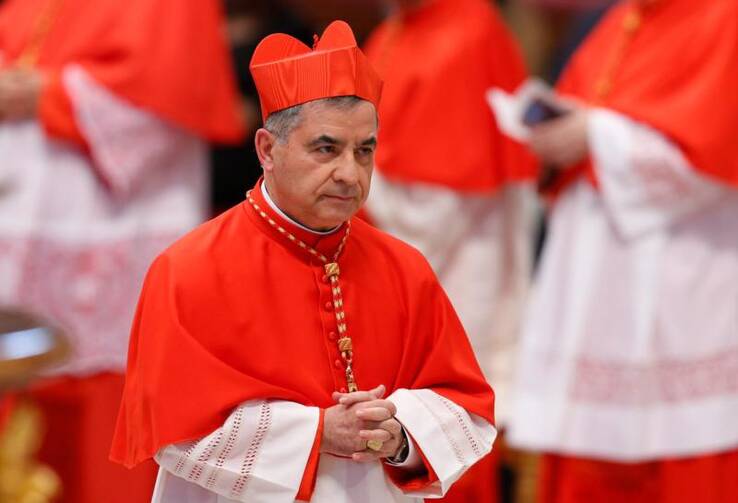 Cardinal Angelo Becciu, prefect of the Congregation for Saints' Causes, is pictured after being made a cardinal by Pope Francis during a consistory in St. Peter's Basilica at the Vatican June 28, 2018. (CNS photo/Paul Haring)

VATICAN CITY (CNS) -- Nearly a month after private documents about a property deal involving the Vatican leaked to the press, a Vatican official rejected accusations that he "played and tampered with the money of the poor."

In an interview with the Italian news agency ANSA Oct. 29, Italian Cardinal Giovanni Angelo Becciu, prefect of the Congregation for Saints' Causes, said the Peter's Pence collection "is not only for the pope's charity but also for the sustenance of his pastoral ministry."

Accusing him of misusing the fund for investments instead of direct aid to the poor are "muddy accusations that I firmly and disdainfully reject. I have a clear conscience and I know that I have always acted in the interest of the Holy See and never in my personal interest. Those who know me closely can attest to that," Cardinal Becciu said.

According to its website, donations to Peter's Pence -- a collection taken on or near June 29 every year in dioceses around the world -- are used to "sustain the work of evangelization and, at the same time, to help the poor in whatever way is possible."

Questions over the use of funds from the collection also emerged in 2015 after two books were published in Italy alleging financial irregularities at the Vatican.

While Peter's Pence donations are used to help the poor, the Vatican always has said the collection also funds the Roman Curia, which are the offices designed to help the pope exercise his mission of governing the universal church.

Stories about Cardinal Becciu's involvement in investment in a property in London were published shortly after the announcement that Vatican police conducted a raid on offices in the Secretariat of State and its financial oversight office Oct. 1.

The following day, the Italian magazine L'Espresso published what it said was an internal notice from the Vatican police about the "cautionary suspension" of five individuals, including Tomasso Di Ruzza, director of the Financial Intelligence Authority, known by the Italian acronym AIF.

The magazine also alleged that the raid was part of a Vatican investigation into how the Secretariat of State used $200 million to finance a property development project in London's Chelsea district in 2014.

However, in a statement released Oct. 23, the Vatican said an internal investigation revealed that neither Di Ruzza "nor any other employee of AIF improperly exercised his authority or engaged in any other wrongdoing."

Cardinal Becciu served as substitute secretary for general affairs in the Vatican Secretariat of State -- a job similar to a chief of staff -- from 2011 to 2018. He was succeeded by Venezuelan Archbishop Edgar Pena Parra.

According to the leaked documents, the Vatican Secretariat of State eventually purchased a majority stake in the London property in 2018 and incurred debts from the failed project.

The Vatican press office issued no statement on L'Espresso's report nor any clarification regarding the nature of the financial transactions or people being investigated.

At a book presentation Oct. 29, Cardinal Pietro Parolin, Vatican secretary of state, told journalists that the investment in the London property was not as transparent as it should have been and he hoped the investigation would shed light on the matter.

"We are working to clear up everything. This deal was rather opaque and now we are trying to clear it up," Cardinal Parolin said, according to the Reuters news agency.

Asked about how Peter's Pence is used, Cardinal Parolin told reporters, "I think it is administered well."

Later, Cardinal Becciu questioned Cardinal Parolin's characterization of the London property deal as "opaque," adding that real estate investments were a standard practice of the Holy See for decades.

Difficulties that arose from the London property investment, he added, "were born from the majority partner," who according to the leaked documents was London-based Italian financier, Raffaele Mincione.

"Why should it be opaque?" Cardinal Becciu asked in his interview with ANSA. "(Pope) Pius XII was the first to acquire real estate in London. The proposal for this historic and artistic building was put forward to us and when it was made and built there was nothing opaque about it. The investment was regular and registered according to the law."