A Jesuit guide to using philosophy in real life 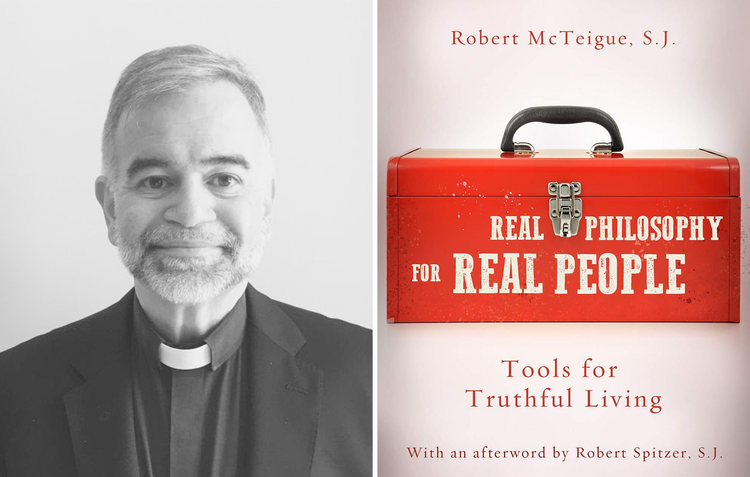 Robert McTeigue, S.J., is an academic philosopher and theologian who currently serves in residence at a parish in California. He also serves as host and producer of "The Catholic Current" on The Station of the Cross Catholic Radio Network and is a columnist at Aleteia.

Author of many works, Fr. McTeigue’s latest book Real Philosophy for Real People: Tools for Truthful Living became available in August from Ignatius Press and Amazon. On Aug. 19, I interviewed Father McTeigue by email about his thoughts on the place of philosophy in our world today. The following transcript of our interview has been edited for style and length.

An interview with academic philosopher and theologian Robert McTeigue, S.J.

As an academic philosopher, what’s your elevator pitch to incoming college students about why they should study philosophy, a discipline that seems to draw fewer majors every year?

There are powers and principalities in this world that want to harm you, lie to you, addict you and corrupt your soul. Philosophy gives you a really great lie detector. It also gives you a great set of tools for knowing the truth, loving the truth and doing the truth.

What can philosophy teach us in the anxious Covid-19 era?

Your new book is titled “Real Philosophy for Real People.” What’s real about your philosophy?

The book has been battle-tested for 20-plus years in the classroom. What we’re doing in my classroom and in the book is having an encounter with the true, the good and the beautiful, and that is the real world. This philosophy is real because it clears away the fog and illusions to help us know the truth about God, our neighbor and ourselves.

What’s real about the people you have in mind for your readership?

The world was made by an intelligent, good and wise God who invites us to live a human vocation.

The subtitle of your book is “Tools for Truthful Living.” What do you mean by truthful living?

Truthful living means living in accordance with what we know about morals, God, our fellow man and ourselves. The world was made by an intelligent, good and wise God who invites us to live a human vocation. What’s truthful about it is the opportunity to know that vocation and find what’s necessary for individuals, communities and even a civilization to live that well.

The “tools” of your chapters include metaphysics, anthropology and ethics. How can these abstract concepts be practically useful for the ordinary people you have in mind?

Whenever we say something is real or truthful or good, being right or wrong about it has tremendous practical import. With every claim of truth or morality, we are either building or destroying the house that we are living in. So in that sense, these abstract concepts are realities—not necessarily material, but really real—and they undergird the world we live in.

With every claim of truth or morality, we are either building or destroying the house that we are living in.

In your preface, you begin with an amusing story about a son asking his father about the best way to make decisions. How can philosophy help people make decisions?

It gives us tools for evaluation, analysis, truth detecting and lie detecting. Once you know what a human person is and what human life is intended for by God, you can make decisions. Philosophically speaking, what I’m pointing to is what St. Ignatius of Loyola would call the First Principle and Foundation.

How does your Jesuit background influence your approach to this question of discernment?

I know that we are made for the praise, reverence and service of God, and that lives and souls are saved—and God is glorified—when we know the truth, love the truth, tell the truth and do the truth. What I’m doing in a philosophical way is in harmony with everything I’ve learned from the Spiritual Exercises of St. Ignatius.

What I’m doing in a philosophical way is in harmony with everything I’ve learned from the Spiritual Exercises of St. Ignatius.

As a Catholic philosopher, who are your role models either living or dead?

Thomas Aquinas, of course. My late great mentor Paul Weiss was an agnostic Jewish metaphysician who was fascinated with Catholic theology and was friends with a great many Catholic thinkers—including Étienne Gilson, Jacques Maritain and our own John Courtney Murray, S.J. Some of the professors who have influenced me have been Monsignor John Wippel at Catholic University, the late great Dominican Father William Wallace, and Monsignor Robert Sokolowski. Also Father James Schall, S.J., Josef Pieper and Robert Spitzer, S.J., who wrote the afterword to the book.

If you could say one thing to Pope Francis about philosophy today, what would it be?

The very great Catholic perennial tradition—rooted in natural law and expounded by the great scholastics—is something that can and should be known and loved today.

What is your favorite scripture passage and why?

I would say it’s from the first letter of Peter when he talks about always being ready to give a reason for the hope that is within you (1 Peter 3:15). Catholics have an obligation to make clear to the world that our hope is not merely wishful thinking; that it’s based on the trustworthiness of the Christ of God.

I want readers to have in their hands a philosophical Swiss Army Knife. So when they hear something that doesn’t seem quite right, they’ll know exactly why it isn’t quite right, how to refute it and then how to offer—persuasively, honestly and attractively—a livable alternative.

Read this next: Want a good job? Major in philosophy.