Micronesia’s Jesuit school is reopening, despite spotty internet and a president stuck outside the country 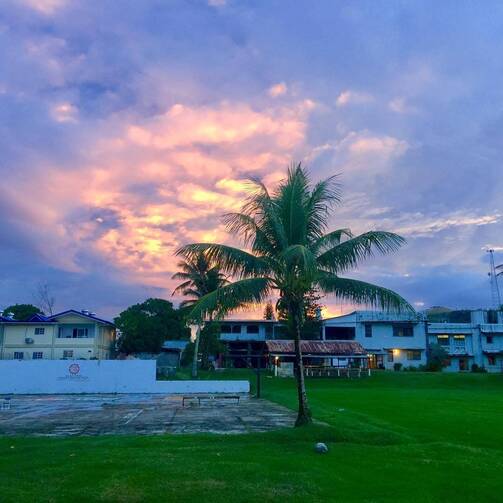 In March, Dennis Baker, S.J., traveled to Guam for a meeting. Before he could leave the country, the Federated States of Micronesia announced that it was closing its borders because of the global coronavirus pandemic, putting in place a travel ban that has remained ever since.

Father Baker is the president of Xavier High School, a Jesuit institute on Weno in the Chuuk Islands of Micronesia. It has been hard for him and for many of his staff who have been stranded outside of the country to be away from Xavier.

“For all of us who have been away, it’s been very difficult,” he told America. “I came up [to Guam] thinking that I could turn around and return right away. I left my desk in my room at the Jesuit residence [in Micronesia] assuming I’d be back in a week. But I’ve been here since March.”

But wherever he was, Father Baker still had the task of organizing a reopening plan for his school. Xavier, which was forced to end its spring term early due to both a local drought and the onset of the pandemic, is opening for its fall term. Father Baker and the staff, however, made a number of changes to ensure the safety of their students.

Among the biggest changes are the limited number of students who will be present on campus.

Among the biggest changes are the limited number of students who will be present on campus. The majority of Xavier students are not from Chuuk and will be unable to attend due to the suspension of local air travel between the five main islands of the Federated States of Micronesia. They will be forced to attend other schools in the meantime and will need to be reintegrated into Xavier whenever it is safe for them to return.

Distance learning was deemed impossible due to inconsistent internet connections throughout Micronesia and because the islands exist in different time zones. The dorms will also be closed, and the only students who will be allowed to attend Xavier are those who are close enough to commute. Enrollment is now a third of the usual 175 students. The number of in-person staff is also slightly less than a third of the usual number.

“The expectation was that this would get sorted out over the summertime and everything would be back to normal in the fall,” Father Baker said, noting it has been an emotional time for students. “But, in hindsight, that was wishful thinking.”

“If someone is going up to me and says, ‘Father, we need water,’ it would be unconscionable to refuse them.”

For Father Baker, pandemic precautions are a must, even as the Federated States of Micronesia has not reported any confirmed cases of Covid-19. Still, he noted that there are really only so many ways to keep his students safe. “The best thing we can do, as with everywhere else, is to make sure to wash your hands and social distance,” he said. “But you can’t really tell kids to stand six feet apart at all times. You just can’t do it.”

In a spot of good news, however, the drought that threatened Weno, the largest town in the federation, passed over the summer. The water delivery infrastructure in Weno has been neglected for years, Father Baker said, leading to droughts being much harder on residents. In the spring, Father Baker redistributed Xavier’s water reserves to those who needed it.

“If someone is going up to me and says, ‘Father, we need water,’ it would be unconscionable to refuse them,” he said. With the drought passing, his focus can be given more directly to the pandemic response.

The Federated States of Micronesia is one of only 10 countries in the world that have had no confirmed cases of Covid-19. But Father Baker is preparing his school nevertheless. If even one of Xavier’s students or staff is confirmed to have the virus, the school will need to be closed for the rest of the year. That there have been no cases so far has been a minor miracle and one crucial for enabling the school to continue functioning.

While Xavier High School can withstand an entire year closed down, Father Baker said it is hard to tell when things will finally be able to get back to normal. For now, Xavier will operate at a limited capacity and prepare for the worst.