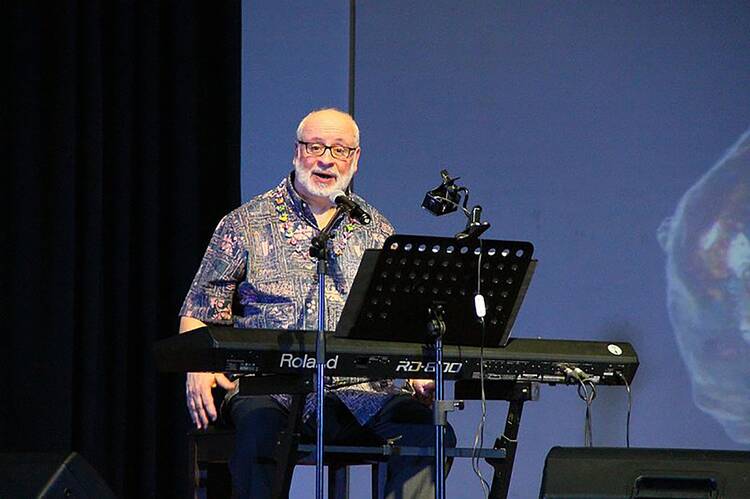 Catholic composer David Haas is shown in a concert at the Ateneo de Manila University in Quezon City, Philippines, in this 2016 photo. (CNS photo/Titopao, CC BY-SA 4.0)

The Archdioceses of St. Paul and Minneapolis and Los Angeles have also banned Mr. Haas, famous for songs like “Blest Are They” and “You Are Mine,” from performing.

Tim O'Malley, archdiocesan director of ministerial standards for the Archdiocese of Minneapolis and St. Paul, said in a July statement the archdiocese has received new, independent reports from women in different parts of the United States alleging that Haas “engaged in inappropriate conduct” with them when they were young adults in the 1980s. The reports are “similar in nature to the conduct described in previous allegations,” Mr. O’Malley said.

In late May, Into Account, a nonprofit that supports abuse survivors, emailed Mr. Haas’ associates to notify them that several women had accused Haas of “spiritual manipulation” and “sexual offenses” including groping, forced kissing and other unwanted sexual advances.

The Archdiocese of Minneapolis and St. Paul, where Mr. Haas lives and works, also reported in June that it had denied Mr. Haas a letter of suitability, which states that an individual is in good standing in his or her home diocese and includes a statement affirming that no allegations of sexual abuse or impropriety have been made against him or her. The archdiocese also reported that in 2018 it had received two reports that Mr. Haas had “acted inappropriately” with adult women in other states. It had previously received a similar complaint in 1987.

Mr. Haas has denied any wrongdoing, calling the accusations “false, reckless and offensive.”

Mr. Haas has denied any wrongdoing, calling the accusations “false, reckless and offensive” in a June press release.

The archdiocese shared the new allegations July 8 “in the interest of accountability and transparency and believe that it may assist others, as it has assisted us, in making informed decisions,” Mr. O'Malley said.

“Survivors of sexual harassment and abuse deserve support and understanding,” he said. “Indeed, our community as a whole has suffered much from those who have used positions of power or privilege to harm others. We have a responsibility to be mindful of this and do what we can to prevent further injury to those who have already suffered harm.”

Following the publication of additional accusations in July, Mr. Haas issued an apology on his website, writing, “I have come to realize that I have caused great harm to a variety of people. I make no excuses for any harm that I may have caused. I take responsibility for my behavior and I am truly sorry.”

Following the publication of additional accusations in July, Mr. Haas issued an apology on his website.

“I never, ever intended to hurt anyone,” Mr. Haas continued. “I realize now that even well-intentioned actions may have hurtful impact and consequences….In offering this sincere apology, I realize many may assume that all allegations made against me are true. At this stage in my path to greater insight, I take this risk without hesitation because I truly want to apologize for the harmful things I have actually done.”

Mr. Haas stated that he has sought professional intervention and treatment “to help me face and truly understand how my actions have violated trust.”

Archbishop Bernard A. Hebda of St. Paul and Minneapolis determined that Haas may not give presentations or concerts at Catholic entities such as parishes, schools and other institutions in the archdiocese, Mr. O'Malley said.

“Likewise, the archdiocese will not use Mr. Haas’ compositions at archdiocesan Masses and other archdiocesan events,” he said. “Also, the archbishop has encouraged pastors, principals, and leaders of other Catholic institutions to consider the sensitivities involved with using Mr. Haas' music in liturgies or other parish or school events, and to take appropriate steps to fully support those who have been harmed by sexual assault or abuse.”

Mr. O’Malley encouraged anyone with information about possible criminal behavior to call law enforcement. He directed calls about “improper conduct” at a parish or school to be reported to the parish or school, or the archdiocese. Also available for contact is Victoria Johnson, who serves as an independent ombudsperson to the archdiocese on abuse or misconduct related concerns.

Mr. Haas directs the Emmaus Center for Music, Prayer and Ministry in Eagan, Minn. He is a founder of the Music Ministry Alive program for youth, a five-day summer liturgical program held annually at St. Catherine University in St. Paul from 1999-2017. He also has worked at St. Thomas the Apostle in Minneapolis, the St. Paul Seminary School of Divinity in St. Paul, Benilde-St. Margaret's School in St. Louis Park and Cretin-Derham Hall High School in St. Paul. He is a member of St. Cecilia in St. Paul, where he has volunteered as a liturgical musician.

According to GIA Publications, Mr. Haas' former music publisher, the composer has published more than 45 collections of original music. He also has written several books on prayer and liturgical music. GIA Publications announced in June that it cut ties with Haas after learning of the allegations, as did his previous publisher, Oregon Catholic Press.

“While OCP’s 2021 missals have already gone to print, we will determine the content of future publications in light of this situation,” Oregon Catholic Press said in a statement.

The story includes reporting from Maria Wiering, editor of The Catholic Spirit, the newspaper of the Archdiocese of St. Paul and Minneapolis.