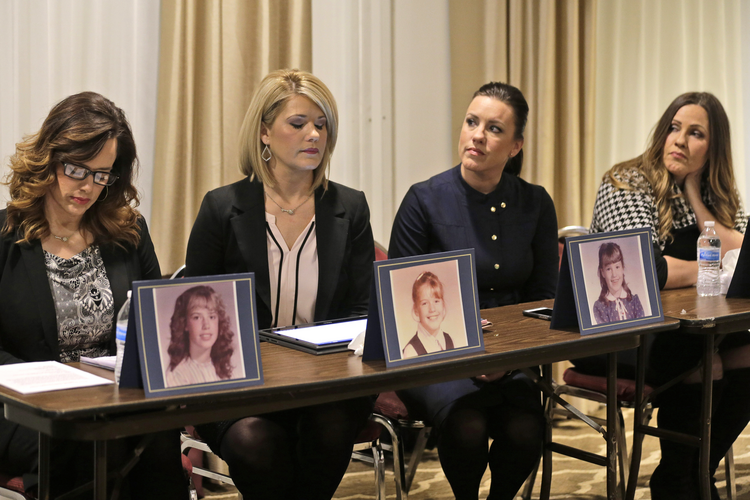 In this Monday, Dec. 2, 2019 file photo, sisters Patty Fortney-Julius, Lara Fortney McKeever, second from left, Teresa Forteny-Miller, second from right, and Carolyn Fortney sit behind pictures of themselves as children as they listen to an attorney speak to reporters during a news conference in Newark, N.J. (AP Photo/Seth Wenig)

NEW YORK (AP) — U.S. Roman Catholic bishops said Thursday that the church tallied 4,434 sex abuse allegations against clergy in the 2018-19 audit year, triple the number seen the previous year, with much of the increase stemming from a wave of lawsuits and claims by survivors of decades-old molestation.

In the latest annual report on clerical sex abuse, dioceses and other Catholic entities reported paying out $281.6 million during the year for costs related to allegations, including payments for cases reported in previous years.

There has been a huge overall surge in allegations over the past three years as dioceses faced unprecedented pressure to address the decades-old problem of clergy sex abuse. There were 693 allegations tallied in the 2017 report, and 1,451 in the 2018 report.

The cases cited in the new report involved 2,982 priests and other church personnel. Of the allegations, 1,034 were substantiated; many others remained under investigation or were unable to be proven, it said.

Many dioceses across the U.S. became targets of state investigations after a Pennsylvania grand jury report in August 2018 detailed hundreds of cases of alleged abuse. In February 2019, former Cardinal Theodore McCarrick was expelled from the priesthood for sexually abusing minors and seminarians, and investigators have been seeking to determine if some Catholic VIPs covered up his transgressions.

Many U.S. dioceses have established compensation programs for victims with credible claims of abuse, and some have sought bankruptcy protection. Hundreds of new allegations surfaced in lawsuits, for the most part filed by men in their 40s, 50s and 60s who said they were abused as children.

It is the 17th abuse report issued since 2002, when the U.S. bishops established and adopted a comprehensive set of procedures to address sex abuse allegations.

Survivors Network of those Abused by Priests, which advocates for survivors of clergy sex abuse, expressed concern about a section of the report indicating that only 60% of parishes nationwide were performing safety audits on their own.

"We remain convinced that the best avenue for change is through secular, elected officials like attorneys general," SNAP said. "Every single sitting attorney general should be investigating cases of clergy abuse in their state, identifying enablers and removing them from power, and ensuring that hidden abusers are made known to their communities."