Bishop Pedro Casaldaliga, ‘bishop of the poor,’ dies in Brazil at 92 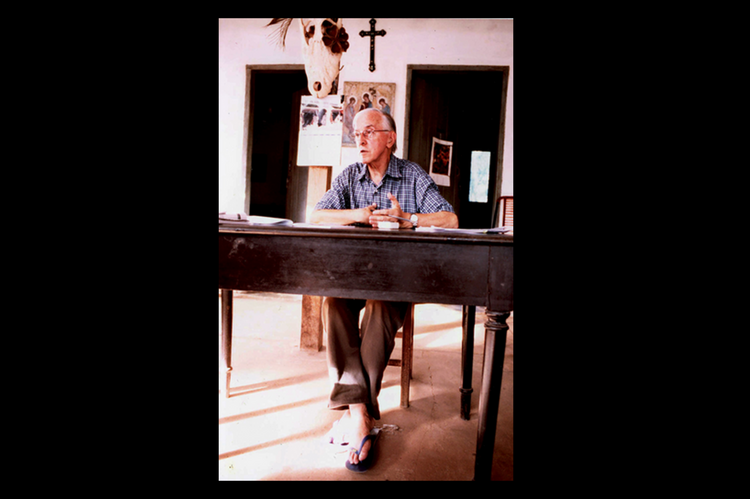 SAO PAULO (CNS) -- Known in Brazil as the "bishop of the poor," retired Bishop Pedro Casaldaliga Pla, 92, died in Sao Paulo Aug. 8 due to respiratory problems arising from pneumonia.

Due to his unrelenting defense of the indigenous population and of the struggle of peasants for land ownership, the retired bishop of Sao Felix was seen as an enemy by land barons, miners and loggers.

"He put himself at the service of the great causes of humanity, which led him to fearlessly face every form of power, oppression and death faced by the poor men and women workers of the Amazon, marginalized in Brazil and in several Latin American countries. Pedro (Casaldaliga) is a legacy and a reference for citizens from all over the world who fight for democracy, for those who dream of a more just and egalitarian world, who want a free and preserved Amazon for the peoples and communities present there," the Brazilian bishops' Pastoral Land Commission said on its webpage.

"He made the church realize that we cannot abandon the poor," Archbishop Leonardo Ulrich Steiner of Manaus told Catholic News Service.

Due to his unrelenting defense of the indigenous population and of the struggle of peasants for land ownership, Bishop Casaldaliga was seen as an enemy by land barons, miners and loggers.

"He himself was poor; he lived like his followers, in poverty," said Archbishop Steiner. "I know this because I lived with him for seven years in a very simple house in the middle of the community. He lived with those he helped, with the poor."

Dubbing him a "prophet," the Brazilian bishops' Indigenous Missionary Council said that in his simple gestures, Bishop Casaldaliga knew better than anyone how to "shelter the little ones of God."

"It was decades of commitment to the peoples' struggles, defending and amplifying the voice of the indigenous, the peasants, the blacks, the women and the most forgotten. Since its inception almost 50 years ago, CIMI has been inspired by Bishop Pedro's example of prophetic life," said the Indigenous Missionary Council, using its Portuguese acronym, CIMI. "His life was a gift and grace for all of us."

One of the bishop's favorite sayings was "If in doubt, side with the poor," according to many who spoke to CNS.

Born in Balsareny, in the Catalonia region of Spain, in 1928, Bishop Casaldaliga chose the option for the poor with consistency and commitment and was one of the most prominent figures in liberation theology, which finds in Scripture the principles and inspiration for working to free people from unjust social patterns and structures.

He arrived in Brazil as a Claretian missionary in 1968, during the most violent period of the country's military dictatorship. Considered one of the most important defenders of human rights in the country and, within the church, an icon of resistance, Bishop Casaldaliga decided not to attend his father's funeral in Spain after learning that the Brazilian government would not grant him a visa to return to the country if he left.

He was elevated to bishop in 1971. Leonardo Sakamoto, anti-slave-labor activist, said that in the early 1970s, Bishop Casaldaliga was the first to accuse agricultural corporations of contemporary slave labor in the Amazon region, with the complicity of the military.

One of the bishop's favorite sayings was “If in doubt, side with the poor.”

"Because of his actions against the dictatorship and the violence of land-grabbers, loggers, miners and large rural producers, he spent much of his life marked to die. He was the target of expulsion proceedings from the country. Poet and writer, he became one of the main victims of the censorship brought down by the men in fatigues during the 'years of lead' (military violence)," said Sakamoto.

Claretian Father Marcos Loro, provincial superior, said, "The congregation and the church received a great gift from God in the person and work of Pedro, who was a man of fidelity, coherence and conduct that united faith and practice."

"He used to say he lived in the Valley of the Forgotten and sought from government agencies justice for the indigenous and the poor. He made the church more present in the (Amazon) region and gave voice to the laymen in the communities," he added.

Although Bishop Casaldaliga's humanitarian and pastoral work earned him dozens of prizes, Archbishop Steiner remembers him above all "as a great mystic."

"His mysticism appears in his poems. He was a great poet, a great intellectual; he was able to read the reality of the times. He once told me, 'What saved me was my faith and my poetry,'" recalled Archbishop Steiner.

Pope Francis, in his post-synodal apostolic exhortation "Querida Amazonia," quoted one of Bishop Casaldaliga's poems. "Carta de Navegante -- Por el Tocantins amazonico." This stands in contrast with the late 1980s, when the bishop received "informal warnings" from the Vatican keep politics out of religious processions and to refrain from traveling to other countries to celebrate Mass or preach without permission of the local bishops.

Bishop Casaldaliga was placed barefoot in a simple coffin covered with a patchwork shawl from Nicaragua and a cross on his chest made by the Xavante Indians for the vigil in the city of Batatais. The bishop often visited Nicaragua without the approval of the nation's bishops.

The Claretian chapel was adorned with burned logs to represent the death of the forest and barbed wire to represent landowners. Also, near the altar where the bishop lay, church workers placed indigenous artifacts and Victoria Regia, a giant water lily common in the Amazon region, to represent the priest's actions in favor of the environment and the indigenous, said Claretian Father Ronaldo Mazula.

As had been his wish, after the wakes in Batatais and Ribeirao Cascalheira, Bishop Casaldaliga will be buried on the banks of the Araguaia River in Sao Felix.

Lise Alves - Catholic News Service
Provide feedback on this article
Join the conversation: Login or create an account
Before you can comment, you need to update your profile to include your first and last name, as required in our comments policy. Then reload this page and you'll be set up for commenting. Update your profile