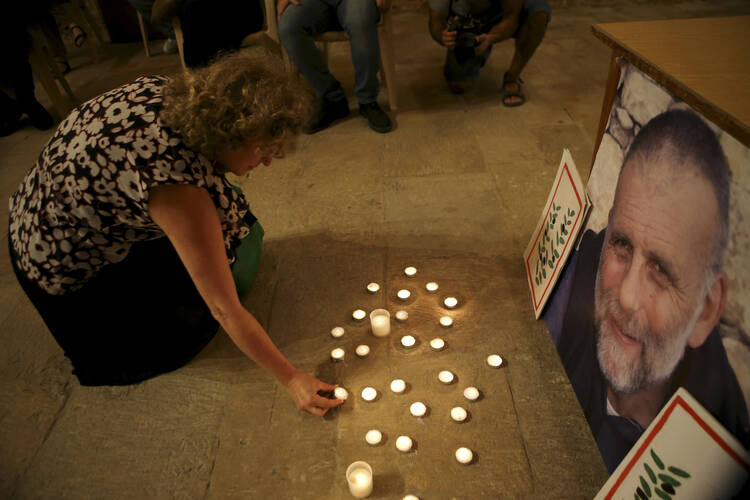 A Lebanese woman lights a candle in front of a portrait of Italian Jesuit priest, Father Paolo Dall'Oglio, at the St. Joseph Church in Beirut, Lebanon, in July 2015. (AP Photo/Hussein Malla)

VATICAN CITY (RNS) — Seven years after the disappearance of an Italian Jesuit priest in Syria, family members and Vatican officials address his legacy and demand the truth about what happened to the thousands who vanished in the war-torn Middle Eastern country.

“My appeal is not to forget about Syria,” said Immacolata Dall’Oglio, sister of the Rev. Paolo Dall’Oglio, who went missing in Syria on July 29, 2013.

“Paolo was kidnapped because he felt that his mission was to be close to the Syrian people,” she said during a news conference in Rome on Wednesday (July 29) at the headquarters of the Italian foreign press association.

The Jesuit priest spent 30 years in Syria in an effort to promote democracy in the country, which has been embroiled in internal and external wars for the past nine years. He founded the monastic community of Mar Musa about 50 miles north of Damascus.

His work, done alongside many young Syrians, to promote democracy in the country ruled by the Assad family for four decades led to his expulsion from Syria in 2012. In July of the following year he returned to the country and visited the city of Raqqa, at the time the capital of the Islamic State caliphate.

In a social media post, Dall’Oglio had said he was going for a “difficult mediation effort,” which some believe to have been tied to the liberation of hostages.

He was seen last at a meeting with students in Raqqa just before midnight on July 28, 2013. “In Raqqa one can almost touch a dream. And God willing it will be the beginning of the liberation of all of Syria,” he had told a crowd of young democratic hopefuls.

Speakers at the news conference asked Italy to investigate the mass grave that was recently found near Raqqa in search of answers. But the sisters of Dall’Oglio — Immacolata, Francesca and Cecilia — have never lost hope their brother might still be alive.

A new documentary by journalist Yasmin Fedda, “Anyounidi” (My Beloved), will be presented in Florence, Italy, to document the search for Dall’Oglio and Bassel Safadi, a Syrian man who shared videos of protests against the Assad regime.

The movie, Immacolata said, tells the story “of the disaster of the situation in Syria and especially of the disappeared,” which she said represents “a crime against humanity that lacked sufficient attention.”

About 100,000 people have been imprisoned or have gone missing in Syria since 2011, according to the United Nations. Many of these are believed to have been taken into custody by government authorities.

In November 2019, the U.S. State Department offered $5 million for any information regarding the whereabouts of Dall’Oglio on the vigil of what would have been his 65 birthday.

Representatives of Catholic organizations that are active in Syria also attended the news conference. Augusto D’angelo, from the lay Catholic movement Sant’Egidio, underlined its commitment to promoting humanitarian corridors between Syria and Italy.

Pope Francis held a private meeting with the family of Dall’Oglio at the Domus Sanctae Marthae, where he lives, in January 2019. Immacolata said the meeting and embrace with the pope “helped (her) keep going” and signaled the importance of Dall’Oglio and his message.

The meeting with the family of Dall’Oglio took place shortly before Pope Francis’ visit to Abu Dhabi, United Arab Emirates, where he signed the “Document on Human Fraternity and World Peace and Living Together” with the grand imam of Al-Azhar, Ahmed el-Tayeb.

Today Dall’Oglio is praised in Catholic circles as a symbol promoting interreligious dialogue, based on his efforts to encourage tolerance and communication between Christians and Muslims in Syria.

According to Paolo Ruffini, the prefect of the Vatican communication department, the kidnapping of Dall’Oglio can be interpreted as an effort to “suffocate this dialogue with the other” and push the country “into a spiral of hate.”