Contemplating creation through the lens of a wildlife camera 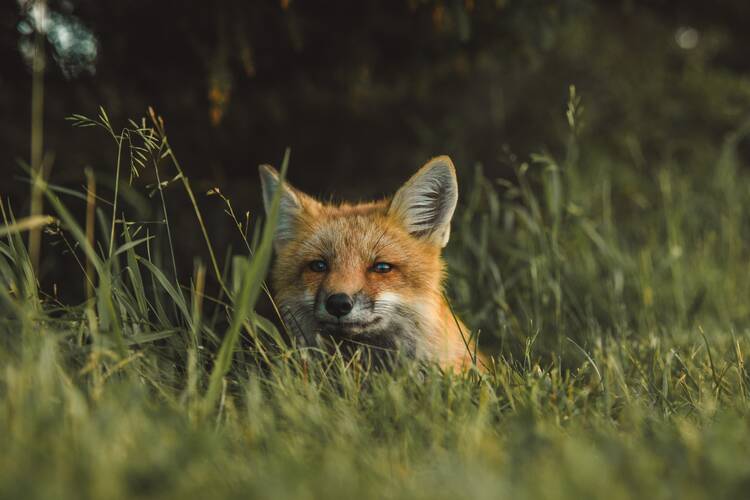 Photo by Scott Walsh on Unsplash

Our daily ritual begins when Amelia and Olivia run to one side of our property in forested northwest New Jersey, where I have hidden a trail camera at the treeline. On the way, we try to decipher tracks stuck in the mud and snow. I remove the SD card, and we upload the photos onto my computer. We see foxes sneak into frame before darting into the distance, and bears slouch toward the camera (and sometimes give it a good smack). Deer nuzzle, their breaths smoking the air. A hare, stretched on its hind legs, nibbles on a leaning blade of long grass. Coyotes in loose pairs sneak between trees, their eyes on something in the darkness. We look forward to that time of each day—and talk about how important it is to let these animals roam free, captured only by the eye of the camera.

The photos and short videos offer moments of shared contemplation and awe in response to God’s creations—a daily reminder that the world is more than humans alone.

The photos and short videos offer moments of shared contemplation and awe in response to God’s creations—a daily reminder that the world is more than humans alone and that we can appreciate wildlife without harming or bothering them. It’s a daily devotional that we hope will cultivate a sense of wonder in our daughters.

They have always been drawn to the wild: to the red-tailed hawks that shriek overhead and the bald eagles whose grandness stuns as they soar from the forest. My wife had the idea to get a trail camera because the woods behind our house teems with wildlife. Stray sightings of peregrine falcons above and voles scurrying below can vanish from memory, but the opportunity to linger on the image of an animal extends the imagination.

In his 2015 encyclical “Laudato Si’,” Pope Francis wrote of his “guide and inspiration,” St. Francis of Assisi, who would “burst into song” whenever he “would gaze at the sun, the moon or the smallest of animals.” The world around him was more than a source of “intellectual appreciation or economic calculus.” As St. Bonaventure notes, Francis would even call animals “brother” or “sister.” This great appreciation for the natural world leads Pope Francis to offer a challenge: “If we approach nature and the environment without this openness to awe and wonder, if we no longer speak the language of fraternity and beauty in our relationship with the world, our attitude will be that of masters, consumers, ruthless exploiters, unable to set limits on their immediate needs. By contrast, if we feel intimately united with all that exists, then sobriety and care will well up spontaneously.”

Wildlife appreciation from afar has come into sharper focus during the pandemic.

I’ve been thinking of that final line during the months of the pandemic, for obvious reasons—how we might better care for each other—but also related to the wild world. We’ve all felt some measure of isolation, including from family and friends. Yet our isolation from the natural world is a pain itself, a loss of what Pope Francis calls the “joyful mystery to be contemplated with gladness and praise.”

Wildlife appreciation from afar has come into sharper focus during the pandemic. New Jersey residents anxious to return to parks and trails received some relief in early May, when Governor Phil Murphy re-opened parks. Yet the re-opening came with strict limitations. Residents could hike, horseback, bike, fish and boat—but they could not swim, camp, go on playgrounds, picnic, enter buildings, buy food or even use bathrooms. Parking was reduced by half, and hours were trimmed.

Why did Christ choose a fisherman?
Rachel Lu

Here in New Jersey—the most densely populated state in the country—park usage is essential. City and suburb dwellers flock to our northwestern and southern counties for the beauty and peace of wide-open land. Yet those treks are often fraught with privilege: time, money and access. The pandemic has narrowed that access even further. It might seem like a small concern, but as Blaise Pascal once wrote, “A little thing comforts us, because a little thing afflicts us.”

Our trail camera is a little thing that comforts us. A few weeks ago, we recorded a shaky fawn, dappled in sunlight, leaning toward its mother, and then nursing. We all silently watched, wrapt. We know it happens all the time, and yet to see something so graceful happen before our eyes was transformative. It was a reminder that the quiet beauty that suffuses this world often goes unnoticed and unappreciated.

I suspect these visions could comfort others. Some in quarantine have turned to livestreams of wildlife at national parks and conservation sites. These cameras on public land are a small but significant gesture to demonstrate that public lands are for all the public—even those who don’t have easy access to the wilderness. For my daughters and the rest of us, it is a way to further our appreciation of the divinely created wildness among us and within us.