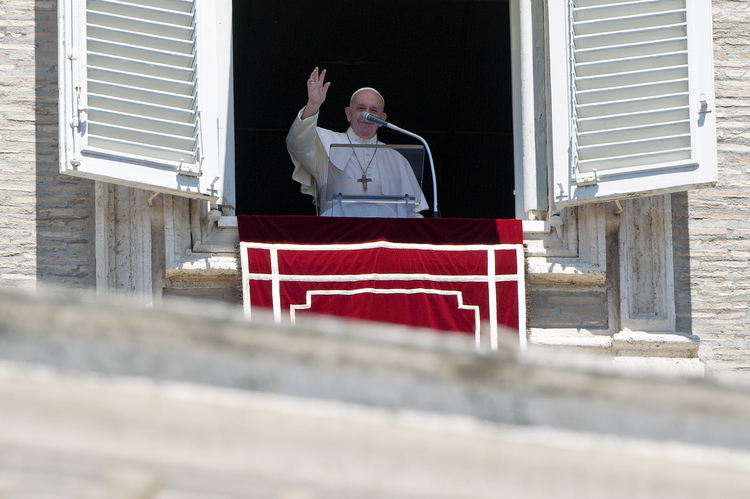 In this file photo, Pope Francis speaks to pilgrims in St. Peter's Square during the Angelus last week, on July 19. (CNS photo/IPA-Sipa USA via Reuters)

Pope Francis today welcomed the full cease-fire accord in the Donbass region of Eastern Ukraine, near the Russian border, that was agreed to last Wednesday by the Ukraine government and pro-Russian separatists in an effort to end a conflict that has caused the deaths of over 13,000 people since 2014.

Speaking after reciting the Angelus with Romans and pilgrims from several countries in St. Peter’s Square at noon on Sunday, Pope Francis said he had learned of “a new cease-fire [agreement] relating to the area of Donbass,” which was signed recently in Minsk by members of the Trilateral Contact Group. That group is composed of representatives from Ukraine, the Russian Federation, and the Organization for Security and Co-operation in Europe; it was formed as a means to facilitate a diplomatic resolution to the conflict in the region.

He expressed thanks “for this sign of good will, aimed at bringing a much-desired peace to that tormented region” and said, “I pray that what was agreed will finally be put into practice, also through effective disarmament and the removal of mines.” He added, “this is the only way to rebuild trust, and lay the foundations for the reconciliation that is so necessary and so desired by the people.”

The pope expressed thanks “for this sign of good will, aimed at bringing a much-desired peace to that tormented region.”

Volodymyr Zelenskiy, president of Ukraine, announced that this "complete and all-encompassing cease-fire" will take effect on July 27. It is the latest in more than 20 cease-fire efforts in a conflict that started on April 6, 2014, following Russia’s take-over of Ukraine’s Crimea peninsula.

“The breakthrough ... is the result of the effective work of the Ukrainian delegation with the support of our international partners in Berlin and Paris,” the Ukraine president’s office said in a statement, quoted by Deutsche Welle (DW), as well as DPA and Reuters news agencies.

According to DW, German Chancellor Angela Merkel and French President Emmanuel Macron insisted on the cease-fire, bringing Mr. Zelenskiy and Russian President Vladimir Putin, as a precondition for another Ukraine crisis summit. Pro-Russian separatist groups said that in addition to the ceasefire, the parties had agreed to ban the use of drones and positioning heavy weapons in built-up areas, measures intended to protect civilians living along the 450-kilometer-long (280-mile-long) front. Return fire is only permissible with the authorization of the highest level of command.

Pope Francis also reminded his audience in the St. Peter’s Square, and those following by television or the internet, that the church today celebrates the feast of Saints Joachim and Anne, the maternal “grandparents” of Jesus. He invited young people, in particular, “to perform a gesture of tenderness towards the elderly, especially the loneliest, in their homes and residences, those who have not seen their loved ones for many months.” This appeared to be an allusion to the lockdown measures caused by the Covid-19 pandemic.

Addressing them directly, Francis said, “Dear young people: Each one of these elderly people is your grandparent! Do not leave them by themselves. Use the inventiveness of love, make telephone calls, video calls, send messages, listen to them and, where possible, in compliance with the health care rules, go to visit them too. Send them a hug.”

Francis: “Dear young people: Each one of these elderly people is your grandparent! Do not leave them by themselves.”

He reminded the young that the elderly “are your roots” and said, “An uprooted tree cannot grow, it does not blossom or bear fruit. This is why the bond and connection with your roots is important. “ He recalled the words of an Argentinean poet, “The blossom of a tree comes from what it has underground.”

Pope Francis, who was particularly attached to his grandmother Rosa, concluded his message by inviting everyone present in St. Peter’s Square “to give a big round of applause for our grandparents, everyone!” He led the applause.