Minnesota Catholics are divided over whether to wear masks to Mass 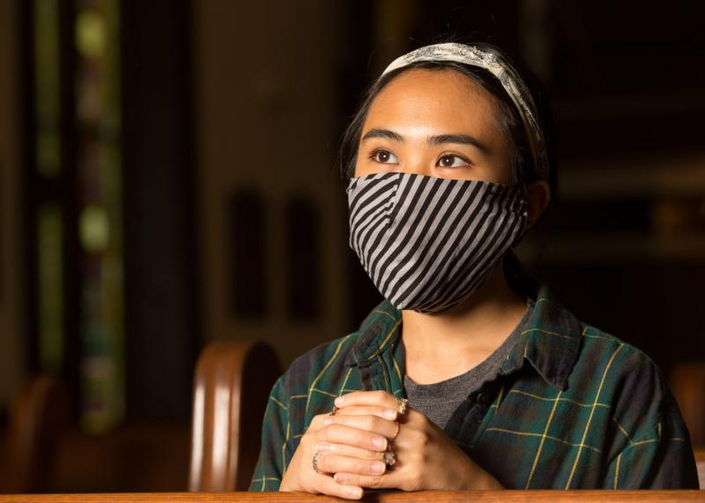 Hazel Jordan, an employee at Our Lady of Lourdes Parish in Minneapolis, poses for a photo July 9, 2020, while wearing a mask in church. (CNS photo/Dave Hrbacek, The Catholic Spirit)

A cantor at St. Therese in the Minneapolis suburb of Deephaven, she's been intimately familiar with her parish's plan to mitigate the spread of COVID-19, even before it reopened for public Masses.

The 19-year-old sang for livestreamed Masses, and now she's leading music for the socially distanced, in-person Masses. Liden takes off her mask only to sing, she explained. And she struggles to understand why others don't take mask-wearing as seriously as she does.

"There's no reason for you not to wear one," she said, noting that her parish offers free masks at the entrance. "It kind of hurts me to see people walk by the masks table without a mask. It's just kind of a slap in the face."

Public health officials have recommended that people wear masks inside enclosed spaces, such as a store or church, to mitigate the spread of COVID-19. Minneapolis Mayor Jacob Frey has mandated mask use in many indoor spaces, and Gov. Tim Walz said he is considering new mask measures in Minnesota.

“There’s no reason for you not to wear one,” she said, noting that her parish offers free masks at the entrance. “It kind of hurts me to see people walk by the masks table without a mask.”

The Archdiocese of St. Paul and Minneapolis' COVID-19-related recommendations to parishes strongly encourage Mass participants to use social distancing and wear masks during the in-person liturgies that resumed in May, following a two-month suspension.

In practice, mask-wearing varies dramatically in parishes across the archdiocese, with some Catholics reporting it's a requirement at their parish, and others saying few people wear masks at their parish church.

In that way, mask-wearing at church has paralleled public mask use in general, which has seen variance across the state and country.

A June Pew Research Center survey found that about two-thirds of U.S. adults say they wear a mask most of the time, but fewer than half reported that most people in their area wear masks most of the time.

Mask-wearing at church has paralleled public mask use in general, which has seen variance across the state and country.

Meanwhile, some see mask use -- or not -- as a partisan issue or a political statement, with political conservatives less likely to mask than political liberals.

Laura Carr said she senses a partisan divide on the matter, but she hopes that's not what's influencing mask-wearing at her parish, Epiphany in Coon Rapids, Minnesota. She sees the decision whether to wear a mask as "a prudential judgment on the part of the wearer," she said. Her family currently chooses not to wear masks.

"For us, to wear a mask at Mass would be to say, 'I am afraid I might get the virus' and 'I'm afraid I might have and spread the virus.' It also says, 'I believe this mask prevents that.' We have not bought into these fears or assumptions, nor are we convinced that mask-wearing is an effective solution for this poorly understood virus," said Carr, a 34-year-old mother of two, who is also pregnant.

Some see mask use—or not—as a partisan issue or a political statement, with political conservatives less likely to mask than political liberals.

"We don't believe reducing ourselves and others to 'virus-carriers' is a loving or dignified view of ourselves and fellow Catholics that belongs in the house and presence of the Lord," she told The Catholic Spirit, newspaper of the Archdiocese of St. Paul and Minneapolis.

She said that she would mask if her pastor or bishop directed her to. "We would not disobey their orders," she explained.

Carr spoke with The Catholic Spirit July 7, the same day Archbishop Bernard A. Hebda released a video on YouTube thanking Catholics for wearing masks and encouraging them to continue to wear masks.

"While I realize that there are lots of opinions out there, the safest path seems to be following the recommendations of the Minnesota Department of Health and Centers for Disease Control," he said. He also encouraged people who find masks uncomfortable, or for whom it's a sacrifice to wear, to unite that sacrifice to the suffering of people around the world.

The video prompted a range of reactions on social media, from people thanking Archbishop Hebda to others accusing him of fear mongering.

In a separate query, The Catholic Spirit asked its Facebook followers July 7 if they wear a mask to Mass, and why or why not. The post received more than 200 comments. Some people said they felt comfortable removing their mask during Mass because they feel social distancing is sufficient, or they found it difficult to breathe while wearing a mask. Some called mask-wearing a government conspiracy. A few said that wearing masks is a sign of fear, and "fear is not from the Lord."

Others said they wore their mask because of advice from health experts and out of respect for others. "Yes because I value the lives of people around me, as well as the people around them," one man replied. One woman said that the commenters who replied "no" were the reason she could not safely attend Mass at this time.

At St. Therese, Liden said one reason she feels so strongly about mask-wearing is because her 86-year-old grandmother lives with her family, and she wants to protect her, and wants others to protect her, too.

Experts say that most masks currently being used aren't designed to protect the wearer, but to prevent the wearer from spreading COVID-19 if he or she has the illness but is unaware. People who know or suspect they have the illness are encouraged to quarantine.

An incoming sophomore at Columbia University, Liden returned to the Twin Cities as the novel coronavirus began to hit New York.

For her, forgoing singing with a choir at Mass for the time being -- another COVID-19 precaution, because of the way singing projects the voice and mucous droplets from the mouth -- is a sacrifice. But it's one she's willing to live with if it could help protect others. Most people at St. Therese are wearing masks, she said, and she's grateful.

She said a few weeks ago, St. Therese's pastor, Father Leonard Andrie, thanked the congregation for wearing masks and keeping others safe.

Maria Wiering is editor of The Catholic Spirit, newspaper of the Archdiocese of St. Paul and Minneapolis.