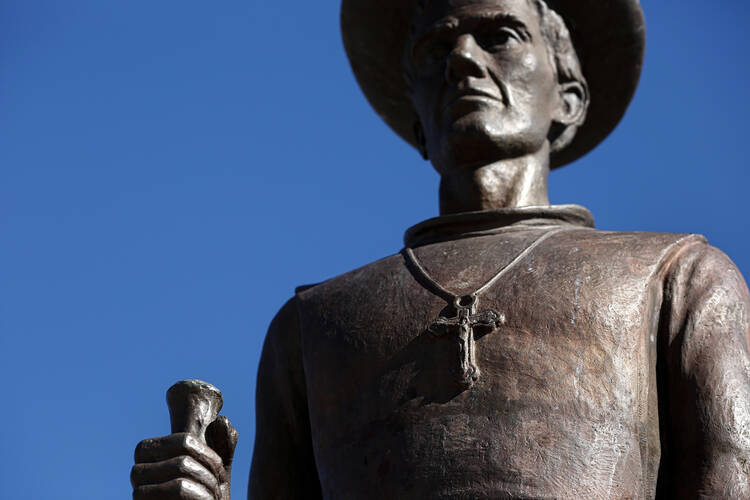 Among a number of holy men and women declared venerable by Pope Francis on July 10 was a Jesuit scholar and founder of more than 20 missions during the late 17th and early 18th centuries, Eusebio Francesco Chini, S.J. In Mexico and the southwestern United States, he is best known as Padre Kino, an adaptation of his surname that he personally introduced. The pope’s decree puts Padre Kino on the path toward beatification and then, presumably, canonization.

Though his story is not well known outside of Arizona, “there are a lot of ways” to look at the legacy of Father Kino, according to Peter Neeley, S.J., of the Kino Border Initiative, a Jesuit ministry of education and advocacy on border issues based in Nogales, Ariz., that takes its institutional inspiration from Padre Kino.

Kino was a “voracious writer,” who left behind “tons of material,” a scientist, cartographer and astronomer, Father Neeley said. “He was a classic example of the 17th-century philosopher-scientist, where faith meets science.”

He is remembered as a defender of the Indigenous people of what would become the United States of America and Mexico and the first European to demonstrate that Baja California was not an island. He presided over a number of first encounters with the region’s Indigenous people and baptized thousands. He founded the San Xavier del Bac mission on the Santa Cruz River, near what is now Tucson, Ariz., in 1692, as part of a network of missions connecting Sonora, Arizona and California. Father Neeley said this padre on horseback is remembered as a peacemaker among Indigenous communities and between Indigenous people and Spanish colonizers and the military who served them.

Kino was ”a classic example of the 17th-century philosopher-scientist, where faith meets science,” remembered as a defender of the Indigenous people of what would become the United States of America and Mexico.

Born in Segno (Trentino, Italy) in 1645, Eusebio Chini studied with the Jesuits in Trent and in Hall, in the Austrian Tyrol. He joined the Society of Jesus in 1665, studied in various universities in southern Germany and was ordained a priest in 1677. Assigned to the missions in New Spain, he arrived in Mexico in 1681.

Six years later, in 1687, he was stationed in Pimería Alta, then considered the northernmost outpost of Christianity, where he established his first mission, Nuestra Señora de los Dolores. For 24 years it served as the center from which he carried out his work of evangelization and scientific study and exploration.

In addition to founding missions, stations and farming communities, he led 50 expeditions, covering more than 19,000 miles on horseback or mule or on foot, conducting surveys that enabled him to draw up 32 maps of the region that became widely used. He died in 1711 in Magdalena in Sonora, Mexico.

According to his official biography, Father Kino was the first to bring the Gospel to this region and quickly became convinced of the need to improve the living conditions of the Indigenous people. He taught cattle breeding, agricultural methods and iron work and promoted the economic development of the Pima people in the state of Sonora in northern Mexico.

“On the social level, he promoted the dignity of the Indigenous people, and he opposed the compulsory labor in the silver mines—carried out under almost impossible conditions—that the Spanish monarchy imposed on the ‘Indians,’” according to the biography.

The Most Rev. Thomas J. Olmsted, bishop of the Diocese of Phoenix, welcomed the news that Padre Kino’s cause was moving forward. “The history of the Catholic Church in Arizona is synonymous with the growth and history of the State of Arizona, and Padre Kino is one of the foundational figures in that great history,” Bishop Olmsted said.

“As a faithful member of the Society of Jesus and a missionary priest, Padre Kino was a tireless advocate for the native peoples of the Southwest. He devoted tremendous energy to meeting their spiritual and temporal needs, founding 21 missions and numerous native-run rancheros, and willingly sharing in the poverty and hardships of those he served.

“He remains a wonderful example of the mission of the Church lived in solidarity with the poor and marginalized,” the bishop said. “His unique combination of missionary zeal, scientific knowledge and practical wisdom is a beautiful illustration of the fruitful union of faith and reason.”

The canonization effort and the legacy of a Franciscan who followed Padre Kino, St. Junípero Serra, has been the source of anger and controversy especially in recent months, as the mission and the colonial era of the U.S. southwest has been more closely scrutinized. Father Neeley believes Padre Kino, should his path to canonization continue, might prove a less controversial figure, noting that he is revered in many contemporary Indigenous communities in the southwest United States and in northern Mexico. Many Indigenous people participate each October in the Camino de Kino, a pilgrimage that retraces one of his historic journeys, ending in Magdalena de Kino in Sonora, Mexico.

Review: Why Americans should brush up on their Catholic history
Patrick Gilger, S.J.

Statues of Padre Kino in the region recall the exploits of this “padre on horseback,” and one in the rotunda of the Capitol in Washington honors his role in Arizona history.

According to Father Neeley, Padre Kino helped the Indigenous communities prepare for the arrival of Spanish colonists by teaching them Spanish and organizing them into mission communities that could defend themselves against exploitation, particularly by colonial mining interests. “His missiology was to try to isolate and protect the people from the contamination of the Europeans,” Father Neeley said.

Protected by an imperial indult, “the army worked for him, he did not work for the army,” he said. “Serra had the opposite situation; Serra had to fight off the army.”

Pope Francis is, of course, likely familiar with the story of this fellow Jesuit. Father Neeley suggests the timing of the decree of Kino’s heroic virtue may have something to do with the pope’s desire to shine some light on the U.S.-Mexico border and the problems experienced by Central American and Mexican immigrants and Indigenous communities today.