I am a Black Catholic convert and believe the church must address racism now. 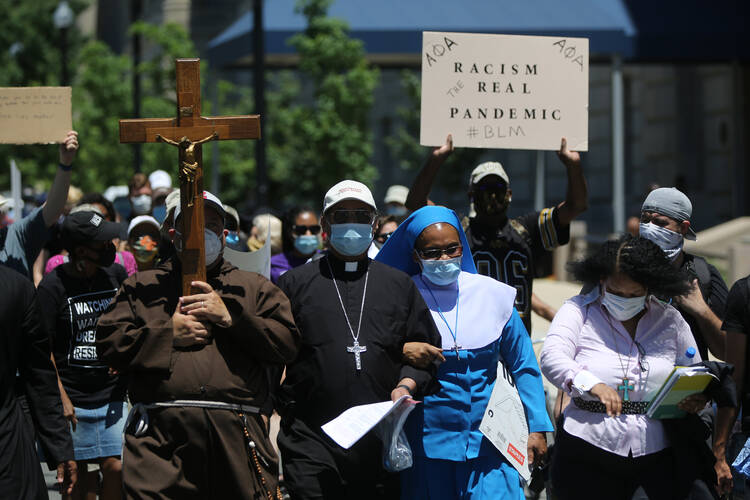 I went to college only an hour away from where I grew up and again experienced overt racism; this was about the same time as the Kendrick Johnson case in 2013, which involved the mysterious death of a 17-year-old Black student, found upside down in a rolled-up gym mat, in Valdosta, Ga. Law enforcement officials declared his death an accident, but his parents said that the police rushed their investigation, and there is currently a campaign to reopen the case. The Kendrick Johnson case taught me that Black people cannot rely on the systems that are meant to protect us and to provide justice.

I experienced microaggressions while navigating a system that preserves a higher status for white people.

When I eventually made it to Florida to pursue a master’s degree in business administration, I experienced microaggressions while navigating a system that preserves a higher status for white people. For example, in graduate school I would hear: “Oh, you go to university? What sport do you play?” Or: “Wow, you are so articulate.” In my experience, complaints about racist behavior or language from staff and faculty were not taken seriously.

Then I moved to New York City, believing that I would not experience racism and segregation in a place with such a liberal reputation. But as a Black person you finally come to the conclusion that racism will follow you everywhere. This is why my family questioned why I would join a faith that did not have the same level of Black representation as the church that I grew up with.

It was a little over a year ago that I decided to become a Catholic. I was raised in the Black church by a family of pastors, including my Baptist minister dad, Baptist minister grandpa and Pentecostal pastor grandma. (Most of my father’s siblings were ministers as well.) Converting to Catholicism was not easy, but when I was growing up, my dad emphasized two things to remember in my walk of faith: the power of prayer and having a personal relationship with God. These two sentiments clicked once I started going to Mass as a graduate student in Florida. In pursuit of my own personal relationship with God, I found Catholicism, and I am glad I did. But at a time like this, in which a major reassessment of the progress of civil rights is imminent, I am left to wonder what our response as Catholics will be.

My family questioned why I would join a faith that did not have the same level of Black representation as the church that I grew up with.

In my parish, I have started having conversations centered on race and faith. I have led conversations about racism, including a Friday Vespers service that I led alongside another parishioner, and a great conversation with our pastor, Msgr. Alfred LoPinto, about his homily at Pentecost. A week later, I talked with more parishioners about how racism can be discussed in any community. These conversations must happen throughout the national and global church.

The United States is at an inflection point. We have deemed our society to be “just,” but we constantly see that there are two systems of justice, one for white people and another for Black people. This reality is not new to American life, but it has too often been ignored in our national conversation, as if the injustice was not important enough to be addressed by white people.

Our beloved church has been complicit in the oppression of Black people in this country and should work to address and reconcile its racist past and ongoing participation in racist structures. Pope Francis has acknowledged that George Floyd’s death can be attributed to the “sin of racism,” and while I am thankful for the acknowledgement, it is still not enough.

‘Where have I seen racism in myself?’ Readers respond
Our readers

We can create task forces for racial reconciliation that would be inspired and possibly guided by Pope Francis. We can have a summit with our bishops and parishioners about changes we would like to see in our communities across the United States. We can institute policies, with the support of the U.S. bishops, with zero tolerance for discrimination against people of color. After this year’s global protests, the call to action is there. We as Catholics must answer it now.

Pope Francis is showing the world that the Roman Catholic Church can move forward. I hope that momentum does not lose steam now.

When I joined the Catholic Church, my family and friends questioned why I would leave the community that raised me. As I have seen the church move the needle more and more toward progress, I have watched our phenomenal shepherd, Pope Francis, do some exemplary work on a lot of fronts. From the outspoken comments on how the church should apologize to the gay community for the way the church has treated them to his strategic moves to broaden the profile of the hierarchy of the church, Pope Francis is showing the world that the Roman Catholic Church can move forward. I hope that momentum does not lose steam now, as we start to have conversations about the original sin of the United States.

When was the last time that we had all 50 states come together to deal with such a complex but vital issue? When was the last time a major sect of Chrisitianity made it a priority to address racism? My fellow Catholics, we could be the first to do so. As a Black man who is a recent convert and has seen what the church can do, I definitely believe it is possible. 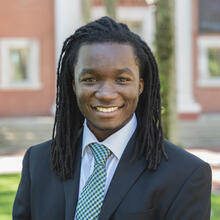 Tevin Williams works for the Y.M.C.A. of Greater New York and is a member of St. Charles Borromeo Church in Brooklyn Heights, N.Y. A member of the Young Professionals ministry, he converted to Catholicism on Easter in 2019.