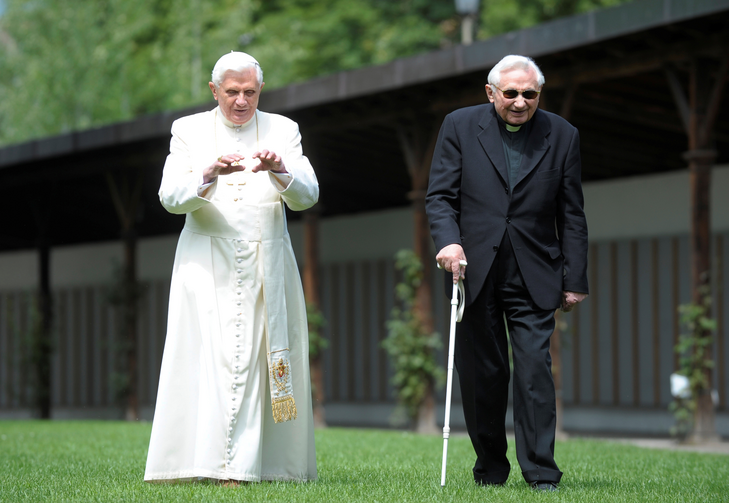 Msgr. Georg Ratzinger, the older brother of Benedict XVI, died on July 1 at the age of 96. In an extraordinary gesture of brotherly love, the frail 93-year-old pope emeritus left the Vatican and took a plane to Regensburg to visit his ailing sibling, on June 18, in what was to be the last time the two would meet.

Georg, the second of three children, was born in Pleiskirchen, Bavaria, on Jan. 15, 1924. The Ratzingers were a close-knit family. The two boys went on to become priests and were ordained on the same day, while their sister, Maria, remained single and in later years cared for her brother, Joseph, until she died in 1991.

Vatican News, in a report on his death, recalled that in a 2011 interview Georg Ratzinger said: “My brother and I were both altar boys, we both served Mass. It was soon clear to us, first to me and then to him, that our life would be at the service of the Church.”

In an extraordinary gesture of brotherly love, the frail 93-year-old pope emeritus took a plane to Regensburg to visit his ailing sibling, on June 18, in what was to be the last time the two would meet.

Then, recalling their childhood, he said: “At Tittmoning, Joseph had received Confirmation from Cardinal Michael Faulhaber, the great Archbishop of Munich. He had been impressed, and said he too wanted to become a cardinal. But, only a few days after this encounter, seeing the painter who painted the walls of our house, he also said that when he grew up, he wanted to be a painter.”

Georg was gifted musically and began playing the organ in the parish church at the age of 11. Vatican News recalled that in the same interview, Georg spoke about the love of music the Ratzinger family shared: “In our house everyone loved music. Our father had a zither that he often played in the evening. We used to sing together. It was always an event for us. In Marktl am Inn, later, there was a music band that fascinated me. I always thought that music was one of the most beautiful things God created. My brother always loved music too. Maybe I infected him.”

Georg entered the minor seminary in Traunstein but, in 1942, at the age of 18, was conscripted into the Reichsarbeitsdienst (the Reich Labour Service) and subsequently into the Wehrmacht, the German army, though his father was always against Nazism. Georg fought with the army in Italy but was captured by the Allies in March 1945, near the end of World War II. He remained a prisoner in Naples for several months before being released and allowed to return to his family.

Their paths moved in different directions: Georg in the world of music and Joseph in that of theology.

In 1947, Georg and Joseph entered the Herzogliches Georgianum seminary in Munich, and on June 29, 1951, they were ordained priests together in the Cathedral of Freising by Cardinal Michael von Faulhaber. From then on, their paths moved in different directions: Georg in the world of music and Joseph in that of theology.

Georg directed the Regensburg boys’ choir from 1964 to 1994, when he retired. He toured the world with the choir, conducting concerts and directing recordings for labels like Deutsche Grammophon and Ars Musici, with productions of Bach, Mozart, Mendelssohn and other composers.

Six years after his retirement, accusations were made that the head of the school the boys attended sexually abused some of them. Georg said he had no idea the abuse occurred, but nevertheless he apologized to the victims. He did say that he knew the boys were subjected to corporal punishment at the school, but he had not known “the exaggerated vehemence with which the director acted,” he told the Bavarian newspaper, Neue Passauer Presse.

Benedict XVI, commenting on their very close relationship, said in 2008: “From the beginning of my life my brother has always been for me not only a companion, but also a trustworthy guide.”

Georg’s younger brother followed a different path. Joseph became a theology professor in 1958 and participated as a theological advisor to Cardinal Alfred Frings of Cologne at the Second Vatican Council (1962–65). He taught theology at the universities of Münster, Tübingen and Regensburg, before Paul VI named him archbishop of Munich in March 1977 and three months later gave him the red hat. John Paul II called him to Rome to head the Congregation for the Doctrine of the Faith, a post he held until his election as pope in April 2005.

Georg was surprised and a little unhappy at his brother’s election as pope and said, “I must admit, I didn’t expect it, and was a bit disappointed.” He understood that their relationship would be considerably curtailed but said, “In any case, behind the human decision of the cardinals, there is the will of God, and to this we must say yes.”

He was present at the inauguration ceremony for Benedict XVI and frequently visited his brother during his years as pope (2005–13), including during the summer vacation period at Castel Gandolfo and elsewhere. He visited him frequently in the years following Benedict’s resignation, until his health prevented him from doing so.

Two years before Benedict resigned, Georg gave an interview with a German magazine in which he said, “If he could no longer carry out his duties from the point of view of his physical condition, my brother should have the courage to resign.” Following the announcement of the resignation, Georg said: “Age makes itself felt. My brother desires more peace in old age.”

Benedict XVI, commenting on their very close relationship, said in 2008: “From the beginning of my life my brother has always been for me not only a companion, but also a trustworthy guide. For me he has been a point of orientation and of reference with the clarity and determination of his decisions. He has always shown me the path to take, even in difficult situations.”

Provide feedback on this article
Join the conversation: Login or create an account
Before you can comment, you need to update your profile to include your first and last name, as required in our comments policy. Then reload this page and you'll be set up for commenting. Update your profile
Advertisement
More: Pope Benedict XVI / Vatican