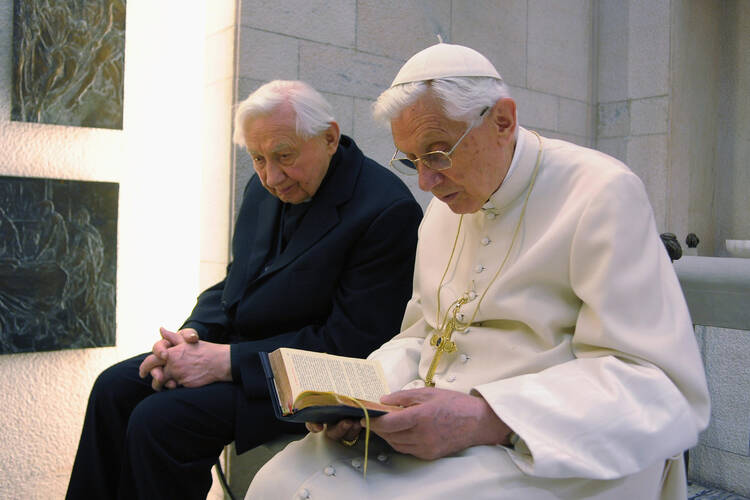 Retired Pope Benedict XVI is seen in a file photo praying with his brother, Msgr. Georg Ratzinger in his private chapel at the Vatican. (CNS photo/L'Osservatore Romano via Reuters) S

In a very surprising move, Pope Emeritus Benedict XVI, 93, flew to Germany this morning, on a plane provided by the Italian state, to visit his brother, Msgr. Georg Ratzinger, 96, who is gravely ill at his residence in Regensburg.

He was accompanied by his private secretary, Archbishop Georg Ganswein, a nurse, a doctor, one of the lay women who care for him and a number of security guards, including the deputy head of the Vatican Gendarmerie, various sources, including the Vatican and the secretary of the German bishops’ conference, confirmed to the local and international media.

He arrived in Munich at about 11:45 p.m. and was transported from there to Regensburg by ambulance, accompanied by Bishop Rudolf Voderholzer. Benedict is still in Germany and “will stay there as long as is necessary,” said the Vatican spokesman, Matteo Bruni.

The two brothers have always been very close to each other and were ordained priests on the same day, June 29, 1951. Their lives then moved in different directions: Georg became a talented musician; Joseph went on to become a renowned theologian, bishop, cardinal and pope. Georg visited his brother many times when he was pope and after he resigned. In 2008, Benedict said, “My brother was not only a companion but also as a trustworthy guide.”