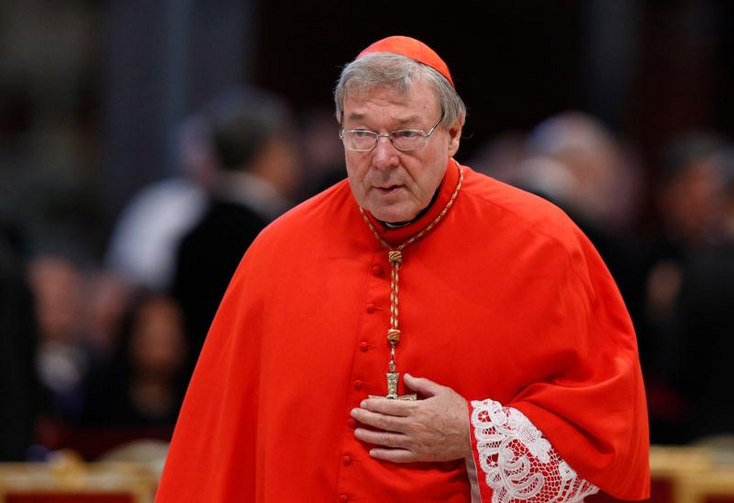 ROME (CNS) -- Ignatius Press will be publishing Australian Cardinal George Pell's prison journal and it is also appealing for donations it will give the cardinal for outstanding legal expenses incurred in defending himself against allegations of the sexual abuse of minors.

Jesuit Father Joseph Fessio, editor of the U.S.-based Ignatius Press, said, "I've already read the first half of the journal and it is extraordinary. I think it's going to be a spiritual classic."

The complete journal, he said, is about 1,000 pages, "so we will print it in three or four volumes" with the first volume expected to be out in the spring of 2021.

"With your help, we can proceed with this project and offer Cardinal Pell appropriate advances on these volumes, which he can then use to remove much of the worry he now has about his legal debts," the priest said in a message published in June on the Ignatius Press website.

The "Cardinal George Pell Donation Project," found on Ignatius.com, said donations made through the publisher's website or its parent company, Guadalupe Associates Inc., were tax deductible.

A jury in Australia had found Cardinal Pell guilty in December 2018 on five counts of abuse and the Victoria Court of Appeal upheld that verdict in a 2-1 decision.

The 79-year-old cardinal had served nearly 14 months out of a six-year sentence when, in April, seven judges of the High Court of Australia dismissed his conviction on charges of abusing two choirboys in 1996. He was in solitary confinement 23 hours a day for 405 days.

Cardinal Pell's trial and appeal are estimated by lawyers to have cost millions of dollars, but he said in an interview with Sky News Australia in mid-April that the church did not pay for it. He said it was paid for by "a lot of very generous people," some of whom were wealthy, and he dipped into his own retirement savings.

Father Fessio wrote that now the cardinal was "out of jail and back in action," he still had "the ongoing challenge of meeting the many legal expenses which were necessary to right the terrible injustice done to him."

"One way of doing this is to publish his story," the priest said, describing the cardinal as "a good man, and a good friend personally of mine and of Ignatius Press," which has published books by the cardinal in the past.

The cardinal led the Archdiocese of Melbourne from 1996 to 2001 and the Archdiocese of Sydney from 2001 to 2014, when Pope Francis called him to head the Vatican's newly formed Secretariat for the Economy. In mid-2017, the cardinal took leave from his position to return to Australia to face the abuse charges; his term as head of the secretariat expired in 2019.

Although the High Court overturned the criminal conviction because the prosecution failed to eliminate reasonable doubt, the cardinal still faces a number of civil suits in the supreme court.

The latest lawsuit alleges the cardinal knew about abuse perpetrated by a now-convicted and former Christian Brother Ted Dowlan, and the cardinal was reportedly involved in moving him to different schools.

Newly released information in May found in the final report of Australia's Royal Commission into Institutional Responses to Child Sexual Abuse was also critical of the cardinal, saying it did not believe some of the testimony he had given them about being unaware of abuse being perpetrated by some priests.

Father Fessio wrote that the High Court's recent decision was a vindication for the cardinal and that his victory was "a victory for the church" and revealed "just how far the church's enemies will go and how deceitful they will be to discredit her."

"Now that we've won, let's help Ignatius share the story and let us help Cardinal Pell get out from under this remaining burden," Father Fessio wrote.

Cardinal Pell, who has repeatedly maintained his innocence and said he holds no ill will toward his accuser, said after his April release from prison that his trial "was not a referendum on the Catholic Church; nor a referendum on how church authorities in Australia dealt with the crime of pedophilia in the church."

"This point was whether I had committed these awful crimes, I did not."

The Vatican welcomed the High Court's unanimous decision in April, recognizing the cardinal had "waited for the truth to be ascertained," and it reaffirmed "its commitment to preventing and pursuing all cases of abuse against minors."

1
Blessed Carlo Acutis is set to become the first millennial saint. This isn’t the first time the Catholic Church has canonized children.
Joanne M. Pierce
2
Talking to Jesus about voting, and listening for freedom rather than fear
Sam Sawyer, S.J.
3
Pope Francis calls Trump’s family separation border policy ‘cruelty of the highest form’
J.D. Long-García
4
I started school at Steubenville as a conservative culture warrior—and came out the other side more Catholic
Elisha Valladares-Cormier
5
President Trump tweeted about Archbishop Viganò. So, who is he?
Michael J. O’Loughlin