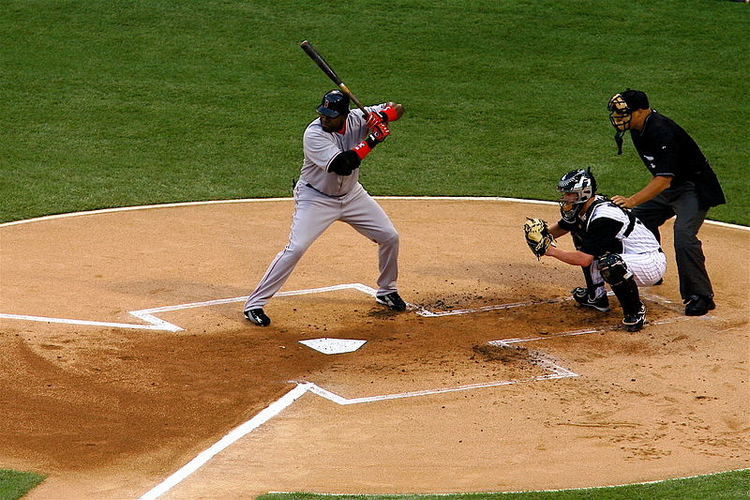 David "Big Papi" Ortiz was a legendary hitter for the Boston Red Sox, but rarely took the field. (Wikimedia Commons)

Change is a part of baseball. Counting the first two foul balls as strikes, for example, began in the National League in 1901 and in the American League in 1903. That rule change, many believe, led to the Deadball Era, the first couple of decades of the 20th century in which defense and good pitching (including the legal use of the infamous spitball) led to low scoring. Baseball was still establishing the regulations that would govern the game.

Fans like high-scoring competitions, so the game introduced a livelier ball with more density in 1911. That wasn’t enough, though, so baseball introduced a machine-wound ball in 1919. But the Deadball Era may have never ended had baseball not banned the spitball in 1920.

The designated hitter followed the so-called Second Deadball Era, from 1963 to 1972 (though, like just about everything in baseball, the time frame is debated). Players didn’t hit as well during those years, likely due to an expanded strike zone. In 1968, Bob Gibson pitched 300 innings, threw 13 shutouts and completed 28 games with a 1.12 ERA. The only time he was removed from a game that year was for a pinch hitter. In 1969, baseball lowered the pitcher’s mound from 15 to 10 inches, delighting hitters, and the designated hitter was introduced by the American League in 1973.

This year, pitchers will not hit—not in the American League nor in the National League. Experts speculate this will lead to a permanent change in baseball.

Major League Baseball has used the coronavirus as an excuse to bring the D.H. to the National League this year, if and when players return for a shortened season. (A 60-game season is the current proposal.) This year, pitchers will not hit—not in the American League nor in the National League. Experts speculate this will lead to a permanent change in baseball.

If you oppose such a change, like I do, you’ll likely be labeled a traditionalist. And sure, I like day games and outdoor stadiums, but I also like instant replay and love the emotion in the game today. And as far as the D.H., there are more reasons to keep it out of the National League than to bring it in.

We are not in danger of slipping into another Deadball Era. Last year, there were so many home runs—a record 6,776—some suspect the baseball was juiced.

We are not in danger of slipping into another Deadball Era. Last year, there were so many home runs—a record 6,776—some suspect the baseball was juiced.

The American League, per usual, outpaced the National League in runs scored in 2019, 11,859 to 11,608. But over a season in which 30 teams each play 162 games, the 2 percent difference isn’t exactly glaring. The overall difference in batting average between the two is also miniscule—.251 in the National League vs. .253 in the American League. And despite the D.H., A.L. hitters struck out at a slightly higher clip, 21,415 to 21,408. The offensive stats in the two leagues are highly comparable.

These numbers don’t justify a universal D.H. And even if you argue a D.H. would bring a larger audience—which I would dispute—keep in mind Major League Baseball brought in a record $10.7 billion last year with no universal D.H.

Ostensibly, the change this year will allow for more interleague play, as baseball plans for teams to play more games in their geographical area. But there’s no reason to be certain that such scheduling will continue in 2021.

Now, the designated hitter is older than I am, and the debate about it started before my grandparents were born. In 1906, an editorial headlined “Why a pitcher ought to bat” in The Sporting Life newspaper put it succinctly: “Instead of taking the pitcher away from the plate, the better remedy would be to teach him how to hit the ball.”

It was a winning argument until, as I mentioned, 1973, when the Yankees’ Ron Blomberg became the first designated hitter in M.L.B. history. Since then, the American League has been the home of the D.H.; the National League has not. Behold, the pluralism of baseball!

If you watch an N.L. game, you might see a starting pitcher lay down a sacrifice bunt—or at least attempt it. They essentially give themselves up for the good of the team. You might also see a double switch, when a manager switches the pitcher and a player in the field at the same time, thereby changing the batting order to the team’s advantage.

Managers sometimes pull starting pitchers early in the game for a pinch hitter. If the pinch hitter gets on, drives in a run, it seems worth it. If he makes an out and the relief pitcher who comes in has a bad day, well, what was he thinking?!

The Sporting Life newspaper put it succinctly in 1906: “Instead of taking the pitcher away from the plate, the better remedy would be to teach him how to hit the ball.”

For fans of National League baseball, we love this. We love to see these tough decisions play out. When pitchers take their own at bats, it keeps them honest. You’re less likely to hit a guy with a pitch if you know the opposing pitcher can hit you right back. More strategy, more surprises, more of a chess match since managers have more options. And we love second guessing managers. If there’s anything better than watching baseball, it’s talking about it.

The N.L. also gives pitchers who can handle a bat a chance to help their own cause. This opportunity has been the occasion for some of baseball’s quirkiest and most endearing moments. Since coming to the N.L., Cubs’ pitcher Jon Lester has become an accomplished bunter. He also has hit a whopping three home runs in his entire life. His one home run last year elated Chicagoland. In one of the more remarkable stats of major league baseball history, the Braves franchise record for single-game R.B.I.s is nine—held by a pitcher who hit two grand slams in one game. And I think the entire world rejoiced when Bartolo Colón, a pitcher better known to his fans as “Big Sexy,” hit his first and only home run on May 7, 2016, at the age of 42.

In Game 2 of the 1988 World Series, Dodgers pitcher Orel Hershiser surrendered just three hits against an Oakland A’s lineup that included José Canseco, Mark McGuire and Dave Parker. Hershiser got three hits himself that game—two of them doubles—scoring a run and driving one in!

As a fan of the game and the N. L., I can’t help debating with friends and family about the designated hitter—the player who only plays half the game. I will happily reference St. Paul’s Second Letter to the Thessalonians, where he writes that if anyone is “unwilling to work, neither should that one eat.” Need I say more? If you do not play defense, you do not hit.

The Morality of Baseball: Fay Vincent on the Steroid Scandal
America Podcasts

The Metaphysics of Baseball: From April 4, 1992
Clyde F. Crews

Yet I would not suggest the American League rid itself of the designated hitter. For nearly 50 years, the D.H. has helped define the differences between the leagues. And who doesn’t love Boston Red Sox legend, “Big Papi,” David Ortiz?

Papi was good for Boston and good for baseball in the A.L. But there is no reason to impose a D.H. on the N.L. this year, and there’s even less reason to make it permanent. For heaven’s sake, the D.H. does nothing to stem the spread of Covid-19.

The universal D.H. does nothing to improve the game. In fact, it does the opposite. It would be better for baseball to allow each league to have its own identity. But, alas, it seems inevitable that, come Opening Day, baseball will be a lesser game.

Show Comments ()
Join the conversation: Login or create an account
Before you can comment, you need to update your profile to include your first and last name, as required in our comments policy. Then reload this page and you'll be set up for commenting. Update your profile
Advertisement
More: Sports / History