Benedict XVI returns to Vatican after visiting his brother in Germany

Benedict XVI returns to Vatican after visiting his brother in Germany 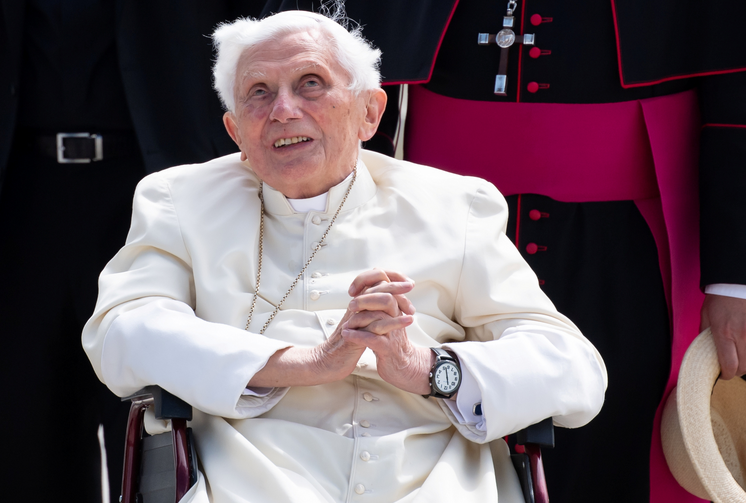 Retired Pope Benedict XVI smiles at Germany's Munich Airport before his departure to Rome June 22, 2020. Pope Benedict, who is 93, traveled to Germany to see his ailing older brother, Msgr. Georg Ratzinger, who is 96. (CNS photo/Sven Hoppe, pool via Reuters)

During his last morning in Regensburg, the 93-year-old retired pope visited his brother, Msgr. Georg Ratzinger, one last time before being driven to the airport in Munich. Msgr. Ratzinger was director of the renowned Regensburg boys' choir from 1964 to 1994, when he retired.

Markus Soder, minister-president of Bavaria, was at the airport to say farewell to the retired pope, who was flown to Germany June 18 aboard an Italian air force jet.

During his last morning in Regensburg, the 93-year-old retired pope visited his brother, Msgr. Georg Ratzinger, one last time.

Soder tweeted two photographs and said saying farewell was emotional. “We are very proud of our Bavarian pope.”

In addition to celebrating Mass each day with his older brother and visiting him every morning and each evening, Pope Benedict also used his visit home as an opportunity to pray at the graveside of his father, mother and sister, Maria, who had run his household in Rome when he was a cardinal. She died in Germany in 1991.

Pope Benedict and Msgr. Ratzinger were ordained to the priesthood together in 1951 and have always been close. While his brother was pope and even after he stepped down from the papacy, Msgr. Ratzinger would come to the Vatican to spend Christmas and a summer holiday with his brother.

When the retired pope arrived in Germany, the Diocese of Regensburg issued a statement asking the public to respect his privacy and that of his brother, who was not well.

“It may be the last time that the two brothers, Georg and Joseph Ratzinger, see each other in this world,” the diocesan statement said.

He was met at the Munich airport by Bishop Rudolf Voderholzer of Regensburg, who accompanied him to the city and back to the airport when his visit was over.

The retired pope traveled with his personal secretary, Archbishop Georg Ganswein, one of the consecrated laywomen who cares for him and his household, a doctor, a nurse and the vice commander of the Vatican gendarme corps, said Matteo Bruni, director of the Vatican press office.

While in Germany, he was transported in his wheelchair in a specially equipped van belonging to Malteser International, the medical service of the Knights of Malta.

After praying at his family members' graves June 20, he went to the Regensburg suburb of Pentling and visited the house where he lived as a professor from 1970 to 1977 and which he used for vacations as archbishop of Munich and Freising and as prefect of the Congregation for the Doctrine of the Faith.

He continued to own the house even after being elected pope in 2005 and spent a few hours there in 2006 during a papal trip to Germany. In 2010, he transferred ownership of the house to the Pope Benedict XVI Institute, which runs it as a museum and study center.

Provide feedback on this article
Join the conversation: Login or create an account
Before you can comment, you need to update your profile to include your first and last name, as required in our comments policy. Then reload this page and you'll be set up for commenting. Update your profile
Advertisement
More: Vatican / Pope Benedict XVI