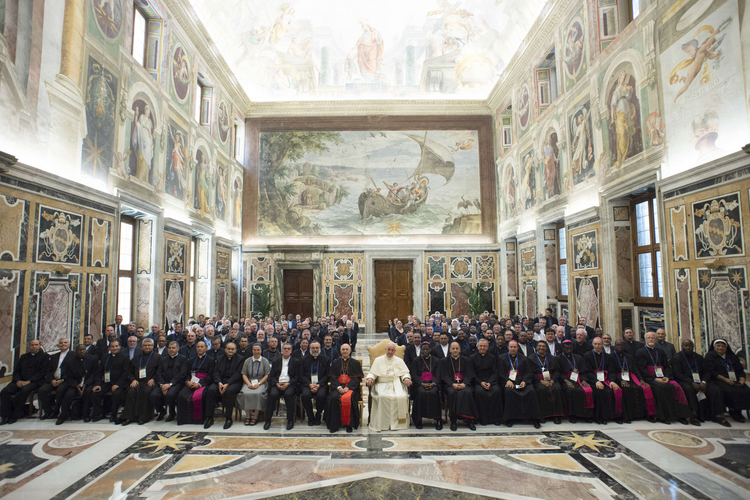 Pope Francis meets with national directors of the pontifical missionary societies, which include the Society for the Propagation of the Faith, the Missionary Childhood Association, the Society of St. Peter Apostle and the Missionary Union of Priests and Religious at the Vatican June 1. (CNS photo/Vatican Media)

Pope Francis delivered a surprisingly strong message to the Pontifical Mission Societies as they engage in a process of re-evaluating their work. He encouraged internal renewal and put them on their guard against “temptations and maladies.”

In the 10-page message, released by the Vatican on May 21, he reminded those responsible for these societies that the church’s mission “is the work of the Holy Spirit and not the consequence of our ideas and projects.”

He advocated that they advance along their original twin-track path of “prayer and charity in the form of almsgiving.” He called on them to avoid “temptations and maladies,” which he spelled out in language reminiscent of his pre-Christmas talks to the Roman Curia.

The church’s mission “is the work of the Holy Spirit and not the consequence of our ideas and projects,” the pope said.

The Pontifical Mission Societies, known in some countries, including the United States, as “Missio,” refers to a group of Catholic missionary societies with global networks that are under the jurisdiction of the pope. There are four main ones founded a century ago: the Society for the Propagation of the Faith, the Society of St. Peter the Apostle, the Holy Childhood Association and the Missionary Union of Priests and Religious.

Through their networks in over 100 countries, they help bring the message of Christ to the peoples of the world. They also support the younger, poorer churches until they are able to be self-sufficient. Their central offices were transferred to Rome in the last century to foster better collaboration with the Congregation for the Evangelization of Peoples.

Pope Francis had originally intended to participate in their General Assembly on May 2, but it was canceled due to the pandemic, hence this message.

In it, he recalled that “Jesus told his disciples that he would send them the Spirit, the Comforter, prior to his departure,” and “in this way, he also entrusted the apostolic work of the Church to the Spirit for all time, until his return.”

Pope Francis warned against five “pitfalls” that the Pontifical Mission Societies should avoid.

Thus, “the mystery of the Ascension, together with the outpouring of the Spirit at Pentecost, indelibly marks the mission of the Church: it is the work of the Holy Spirit and not the consequence of our ideas and projects.”

Francis offered seven “criteria and starting points for the missionary activity of the Church” that he had explained in greater detail in “The Joy of the Gospel” (“Evangelii Gaudium,” his programmatic document published in November 2013). He highlighted them in his message because, he said, “I believe that for the P.M.S. it is beneficial and fruitful—and indeed urgently necessary—to discuss these criteria and suggestions in this stage of their journey.”

The first is “attractiveness.” He said the church grows in the world through attraction and not through proselytism. “If one follows Jesus, happy to be attracted by him, others will take notice.”

The second is “gratitude.” He said: “The joy of proclaiming the Gospel always shines brightly against the backdrop of a grateful memory. The Apostles never forgot the moment that Jesus touched their hearts.”

He said the church grows in the world through attraction and not through proselytism.

He added, “It is useless and above all improper to insist on presenting missionary activity and the proclamation of the Gospel as if they were a binding duty on the part of the baptized.”

He presented “humility” as the third. He explained that “since truth and faith, happiness and salvation are not our own possessions, a goal achieved by our own merits, then the Gospel of Christ can be proclaimed with humility. One can never think of serving the Church’s mission by employing arrogance as individuals and through bureaucracies.”

The fourth starting point is “to facilitate, not to complicate.” He said missionary work should imitate “the patience of Jesus, who always showed mercy to others as they continued to grow.” He insisted that “anyone who participates in the mission of the Church is called not to impose unnecessary burdens on people already worn out or to require demanding programmes of formation in order to enjoy what the Lord gives easily.”

He said the fifth criterion is “proximity to life.” He recalled that “Jesus met his first disciples on the shore of the Sea of Galilee while they were focused on their work” and recalled that “it has always been the case that the proclamation of Jesus’ salvation reaches people right where they are.”

“Any missionary impulse, if derived from the Holy Spirit, manifests predilection for the poor and vulnerable.”

He said, “This has nothing to do with designing ‘specialized’ training programs, creating parallel worlds, or constructing ‘slogans’ that merely echo our own thoughts and concerns.”

The sixth starting point is “the ‘sensus fidei’ of the People of God.” Francis said: “There is one reality in the world that has a kind of ‘feel’ for the Holy Spirit and his workings. It is the People of God, called and loved by Jesus, who for their part continue to seek him amid the difficulties of their lives...never entertaining the presumption of their own self-sufficiency.”

He said the seventh criteria involves “a special care for the little ones and the poor.” Francis said, “Any missionary impulse, if derived from the Holy Spirit, manifests predilection for the poor and vulnerable.”

Francis concluded, “All these demands and approaches are part of the Church’s mission, guided by the Holy Spirit.” But, he said, “instead of leaving room for the working of the Holy Spirit, many initiatives and entities connected to the Church end up being concerned only with themselves.”

Pope Francis went on to warn against five “pitfalls” that the Pontifical Mission Societies should avoid. The first is “self-absorption.” He said, “Church organizations and agencies, quite apart from the good intentions of their individual members, sometimes end up turning in on themselves, devoting energy and attention primarily to promoting themselves.”

He warned that in this way, as Cardinal Joseph Ratzinger once said, “they can foster the misleading idea that a person is more Christian if he or she is occupied with intra-ecclesial structures, whereas in reality nearly all the baptized are daily living lives of faith, hope, and charity, without ever participating in church committees.”

A second pitfall is “control anxiety.” Francis said, “institutions and agencies sometimes set out to help ecclesial communities by employing the gifts generated in them by the Holy Spirit, yet over time they presume to exercise supremacy and control over the very communities they are meant to serve.”

The third pitfall is “elitism.” He explained that “an elitist feeling, the unspoken notion of belonging to an aristocracy, takes hold at times among those who are part of groups and organized institutions in the Church: a superior class of specialists who strive to increase their own influence in collusion or in competition with other ecclesiastical elites, and train their members according to secular notions of activism or technical professional competence, but always with the main goal of promoting their own oligarchic privileges. Isolation from the people.”

Pope Francis said, “The elitist temptation in some organizations connected to the Church can be accompanied at times by a sentiment of superiority and of intolerance towards the rest of the baptized, towards the people of God who may attend parishes and visit shrines, but are not ‘activists’ busy in Catholic organizations.”

He presented the fourth pitfall as “abstraction.” Francis said: “Once they become self-absorbed, institutions and entities connected to the Church lose contact with reality and fall prey to abstraction. They needlessly multiply instances of strategic planning in order to produce projects and guidelines that serve only as means of self-promotion.”

A fifth pitfall is “functionalism.” Francis said, “Self-absorbed and elitist organizations, even within the Church, often end up staking everything on the imitation of secular models of worldly efficiency, like those rooted in competition, whether economic or social.” But, he said, “a Church afraid of entrusting herself to the grace of Christ and focusing on the efficiency of its bureaucracy is already dead.”

He recommended that they “preserve or recover the role of the Pontifical Mission Societies as part of the larger People of God from which they arose” and “to reintegrate themselves” within dioceses, parishes, communities. He advocated that they proceed in such a way that “the essential structure of the P.M.S. remains bound to the practice of prayer and of gathering resources for mission, in all its simplicity and practicality.”

“The very notion of a self-centered missionary effort, which spends time contemplating and celebrating its own initiatives, would be absurd,” he told them, “Do not waste time and resources, then, in looking at yourself in a mirror, devising plans centred on internal mechanisms, functionality and the efficiency of your own bureaucracy. Look outside. Do not look at yourselves in the mirror. Break every mirror in the house!”

Pope Francis warned the Pontifical Mission Societies against the risk of turning themselves into nongovernmental organizations “where everything is devoted to locating and appropriating funds.” He recommended that, in the use of the donations, they should pay attention “to the most fundamental necessities of communities while at the same time avoiding a welfare culture” and “should aim at giving concrete answers to objective needs, without squandering resources in initiatives marked by abstraction, self-absorption or generated by clerical narcissism.”