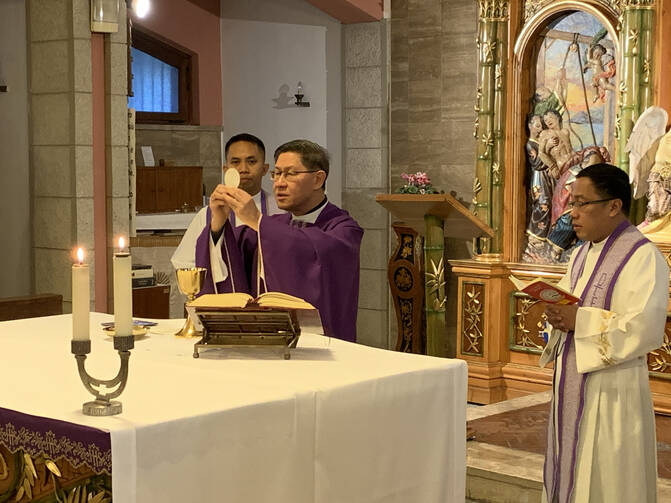 Cardinal Luis Antonio Tagle, prefect of the Congregation for the Evangelization of Peoples and president of Caritas Internationalis, celebrates Mass at the Pontifical Filipino College in Rome Feb. 27, 2020, the anniversary of his priestly ordination. (CNS photo/courtesy of Father Alfonso Alojipan)

Pope Francis has added cardinals Benjamino Stella (Italy) and Luis Antonio Tagle (The Philippines) to the Order of Bishops in the College of Cardinals. He has also appointed Archbishop Ilson de Jesus Montanari (Brazil) as vice camerlengo, or chamberlain.

The Vatican announced all this today, May 1, and added that the pope has also appointed a new nuncio to Iraq, the Slovenian-born diplomat Monsignor Mitja Leskovar, who now becomes an archbishop.

The order of bishops is comprised of the cardinals whom the pope has appointed as titular heads of a suburbicarian church, which are ancient churches in dioceses around the city of Rome, and the Eastern Rite patriarchs who are cardinals. Canon 352 states that the cardinals (of the Latin church) who are the titular heads of the suburbicarian churches have the right to elect one of their members as dean of the college of cardinals when the post is vacant.

As a result of today’s decision, the order of bishops now has 11 members.

Francis added cardinals Tagle and Stella to the order of bishops for different reasons. The Vatican explained that Pope Francis has “promoted” Cardinal Stella, prefect of the Congregation for Clergy, to the order of bishops and assigned him the titular suburban church of Porto Santa Rufina. Though the Vatican statement did not say so, this means he has made him a member of the order to fill the vacancy that had resulted from the death of the French cardinal Roger Etchegeray last September; he held the title of the church of Santa Rufina.

On the other hand, the Vatican said Pope Francis “co-opted” Cardinal Tagle, the new prefect of the Congregation for the Evangelization of Peoples, to that same order by a special rescript, involving a derogation from canon law, which gives him the same status as those who have a title to a suburbicarian church. This is an exceptional way of making him a member of the order.

Cardinal Tagle will head the Vatican’s new top office. What does he bring to the job?
Inside the Vatican

As a result of today’s decision, the order of bishops now has 11 members. Earlier this year they elected Cardinal Giovanni Battista Re as dean and Cardinal Leonardo Sandri as vice-dean of the college of cardinals.

The Vatican also announced today that Pope Francis has appointed a deputy camerlengo (or chamberlain): Archbishop Montanari, the secretary of the congregation for bishops and secretary to the college of cardinals; he continues in both those roles. He succeeds Archbishop Giampiero Gloder, who was appointed as nuncio to Cuba last October.

On Feb. 14, 2019, Pope Francis appointed Cardinal Kevin Farrell, prefect of the Dicastery for Laity, Family and Life, as camerlengo. The camerlengo or chamberlain has important responsibilities between the time of the death of a pope and the election of his successor, including safeguarding and administering the goods and revenues of the Holy See, and presiding over the congregation of cardinals for special purposes in that time. The deputy chamberlain assists him in this role.