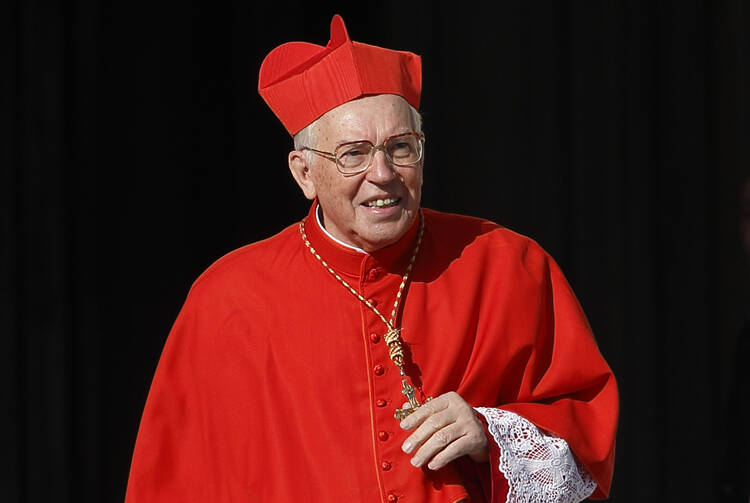 Cardinal Giovanni Battista Re arrives for Pope Francis' celebration of the opening Mass of the Synod of Bishops at the Vatican Oct 3., 2018.

The new Dean of the College of Cardinals is Giovanni Battista Re, an 85-year-old Italian cardinal from northern Italy who has worked most of his life in the Roman Curia and exercised enormous influence in the central government of the church.

Cardinal Re knows the Roman Curia like few others and has served on the board of several Vatican congregations.

The new vice-dean is Cardinal Leonardo Sandri, a 76-year-old Argentinian. A Holy See diplomat, he served in its diplomatic missions in Madagascar and the United States, and as nuncio in Venezuela and Mexico. He worked many years in the Roman Curia, including as substitute, or chief of staff, in the Secretariat of State from 2000-2007, and is currently prefect of the Congregation for the Oriental Churches. If a conclave were to be held before Nov. 18, 2023, when he turns 80, he would preside over it.

The new dean and vice-dean were elected by the 10 cardinal bishops of the Latin Rite (among them three non-Italians), in accordance with the motu proprio issued by Pope Francis last December. They elected Cardinal Re on January 18, and Cardinal Sandri on January 24. The pope then gave his approval after each election.

Cardinal Re will serve a five-year term of office, that is renewable for only one more term. After which he resigns and is known as the emeritus-dean of the college of cardinals. He succeeds Cardinal Angelo Sodano, 92, who was dean for almost 15 years.

In the last conclave, which elected Pope Francis, Cardinal Re presided as the senior cardinal bishop, because neither Cardinal Sodano nor Cardinal Roger Etchegeray, then vice-dean, could preside as they were both over the age of 80. He was elected vice-dean in June 2017, following Cardinal Etchegeray’s request to be dispensed from the role. Although he presided over the last conclave, because he is above the age of 80 he will not be able to preside over the next one.

As “first among equals” in the college of cardinals, the dean has a key coordinating role, in particular, when the pope resigns or dies. He summons all the cardinals to Rome to prepare for the conclave, presides over the pre-conclave meetings, known as General Congregations, and over the conclave itself, if he is under the age of 80. At other times he oversees the college and advises the pope on any particular problems in the college. Like other cardinals, he serves as counselor to the pope. The powers of the cardinals are limited however when the pope resigns or dies, but all those under 80 have the prerogative to elect the new Bishop of Rome.

Born in northern Italy on January 30, 1934, in the commune of Borno (near Brescia, the birthplace of St. Paul VI) Giovanni Battista Re was ordained priest for the diocese of Brescia in March 1957 and, after gaining a degree in canon law at the Pontifical Gregorian University, taught in the local seminary and worked in a parish for a few years before entering the Holy See’s diplomatic service. He served in its diplomatic missions in Panama and Iran before being called to work in the Vatican’s Secretariat of State, as personal secretary to Cardinal Giovanni Benelli.

Known as a dynamic, efficient man, he spent most of the rest of his life in the Roman Curia, first as assessor in the Secretariat of State, and from 1987 to 1989 as secretary of the Congregation of Bishops. St. John Paul II appointed him as ‘substitute’ (equivalent to chief of staff) in the Secretariat of State in 1989, a post he held for the following 11 years. The same pope appointed him as prefect of the Congregation for Bishops and president of the Pontifical Council for Latin America in the year 2000, posts he held until June 2010.

St. John Paul II created him cardinal at a consistory in 2001.