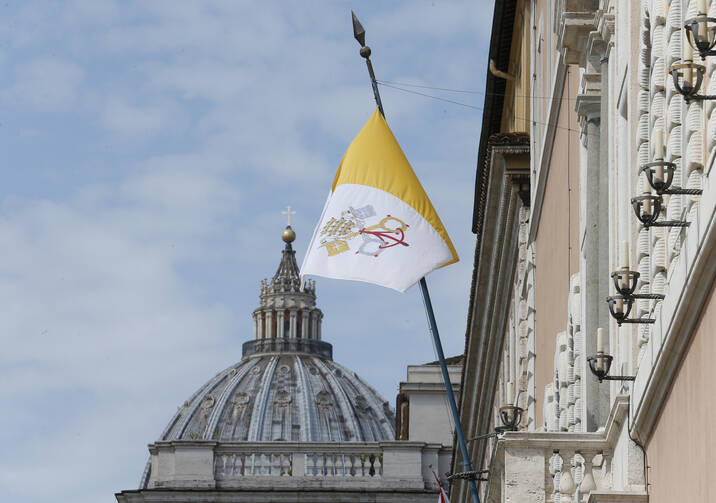 The Vatican confirmed last evening, April 30, that new “individual measures” have been taken against some employees of the Holy See at “the expiry” of earlier “precautionary measures” that were imposed on them at the beginning of investigations last October in relation to “financial investments also in the real estate sector of the Secretariat of State.”

The statement, issued by the Director of the Holy See’s Press Office, Matteo Bruni, offered no further information except to say it was issued in response to questions from journalists. An article published in Il Messaggero, the Roman daily, this morning, May 1, under the headline “May 1, Pope Francis today dismisses 5 workers without waiting for waiting for the end of the [judicial] process,” appeared to throw light on the Vatican statement but, as America has since learned, the Il Messaggero story was also somewhat misleading.

America  reported on Oct. 2 that the Vatican suspended five employees from their duties “as a precautionary measure.”

America  reported on Oct. 2 that the Vatican suspended five employees from their duties “as a precautionary measure,” following the previous day’s raid by the Vatican gendarmerie on offices of the Secretariat of State and of the Financial Information Authority related to irregular financial operations. Two of the five held relatively senior positions of responsibility: the Italian Monsignor Maurizio Carlino (former secretary to Cardinal Giovanni Angelo Becciu), who had just recently been appointed as head of the Office of Information and Documentation in the First Section of the Secretariat of State, and Tommaso Di Ruzza, the director of the Vatican’s Financial Information Authority. The latter is the Vatican’s financial watchdog, effectively the organ of control against money-laundering and possible financing of terrorism.

The three other Vatican employees suspended were Vincenzo Mauriello and Fabrizio Tirabussi, who held posts of responsibility in the office of the Secretariat of State, and Caterina Sansone, an employee in the administration of that secretariat. Mr. Tirabussi managed “financial investments in the Secretariat of State” and the financial scandal appeared to be linked to the buying of a building in a prime location in London. The pope later told the press that in summer 2019 he had been alerted by top officials of the Institute for the Works of Religion (the Vatican bank) and the auditor general to the possibility of major financial wrongdoings in that operation and decided to order an immediate investigation.

In the course of their investigation, the Vatican prosecutors had the Vatican gendarmerie raid the office and the home of an Italian monsignor, Alberto Perlasca.

In the course of their investigation, the Vatican prosecutors on Feb. 19 had the Vatican gendarmerie raid the office and the home of an Italian monsignor, Alberto Perlasca, and took away documents and computers. Monsignor Perlasca had been head of administration of the first section of the Secretariat of State until June 2019, and for the previous ten years was responsible for its investments; he had worked closely with, and under the direct supervision of, Cardinal (then archbishop) Becciu, the third-ranking official in the secretariat. By the time of the raid, Monsignor Perlasca had been reassigned to another sector in the Roman Curia. He was the sixth employee to be investigated.

While the article in Il Messaggero states bluntly, without citing sources, that Pope Francis “today authorized the dismissal of five of the employees without waiting for the end of the judicial process,” America has learned that the situation is somewhat more complex.

First, Tommaso Di Ruzza was not dismissed; he had completed his five-year contract, and it was not renewed for a second term. This is not an uncommon practice in organizations, and there are many such precedents in Vatican operations.

Tommaso Di Ruzza was not dismissed; he had completed his five-year contract, and it was not renewed for a second term.

As for the two clerics, Monsignors Perlasca and Carlino, they were originally members of the Holy See’s diplomatic service who, America has learned, were dismissed from the service and sent back to their home dioceses. Here too there is a question of loss of confidence in them by their superiors, without need to wait for the conclusion of a judicial process. Their case is not unprecedented, not only under this pontificate, but also under previous ones; priests working in the Vatican have often been sent back to their home dioceses, especially if the senior officials for whom they worked judged them no longer suitable.

The case of the two lay employees is less clear. Both Mr. Mauriello and Mr. Tirabassi are still under investigation like the others, but charges have not so far been brought against them. While the Roman daily speaks of “dismissal,” the Vatican statement does not use this word, though America understands that the contract with Mr. Tirabassi could be terminated. The paper also reports that the Vatican prosecutors have not yet interrogated Mr. Mauriello and says his position in the Vatican has been extended to July 31.

Ms. Sansone, on the other hand, has been reassigned to another office in the Vatican and remains an employee of the Holy See.

Il Messaggero’s article raises several troubling questions. First, it insists that “every operation” relating to the buying of the property in London “was always endorsed by the superiors [in the Vatican] and, in the final instance, by the pope.” But how often was the pope informed on this real estate affair over the years, and in what depth, and by whom? These are some of the questions that Vatican sources have raised in conversation with America.

The article also asserts that the property deal in London was “made with the money of Peter’s Pence,” and that Cardinal Pietro Parolin, the Secretary of State termed the details of the deal “opaque,” but the paper claims it “will be worth triple its value after Brexit, as Cardinal Becciu had explained when he was substitute [chief of staff in the Secretariat of State] and dealt directly with this matter, proceeding in every step after gaining the authorization of the superiors.” In this article, and in previous ones, Il Messaggero appears to share the position of Cardinal Becciu on this question. But there are also unanswered questions regarding the intermediaries: Who chose them and why? The paper suggests that this is an aspect “that seems destined to remain unresolved.”

In its statement last evening, the Vatican refrained from going into any detail on this matter, probably because the judicial process has yet to run its course. It remains to be seen how soon the prosecution will reach its conclusions, and what those will be.