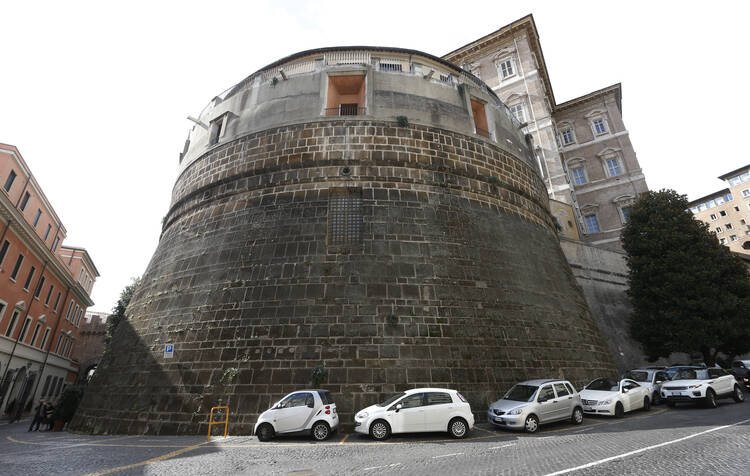 The tower of the Institute for Works of Religion, often referred to as the Vatican bank, is pictured Oct. 2, 2019. (CNS photo/Paul Haring)

Five Vatican employees, including two relatively senior ones, are reported to “have been suspended as a precautionary measure from their duties” inside the Vatican City State following yesterday’s raids by the Vatican gendarmerie on offices of the Secretariat of State and the Financial Information Authority related to irregular financial operations.

The story was broken on Oct. 2 by Emiliano Fittipaldi, a reporter for the Italian weekly L’Espresso, who has a track record of following the financial problems of the Vatican.

An informed Vatican source, who did not wish to be identified, told America that the report is substantially accurate.

L’Espresso reported that the Vatican gendarmerie headed by General Domenico Gianni has sent an order to all personnel within the Vatican City State and the Swiss Guards that control the security and all access to the Vatican, saying the five have been “suspended from service as a precautionary measure.”

It said the five can be allowed to enter the Vatican territory only for reasons related to health care or if required to do so by the Vatican magistrates. The weekly magazine published a photo of the order with photos of the five employees.

The Vatican gendarmerie has sent an order to all personnel within the Vatican City State and the Swiss Guards that control the security and all access to the Vatican, saying the five have been “suspended from service as a precautionary measure.”

Two of the five hold relatively senior positions of responsibility: the Italian Monsignor Maurizio Carlino, who was just recently appointed as head of the Office of Information and Documentation in the First Section of the Secretariat of State (and former secretary to Cardinal Giovanni Angelo Becciu) and Tommaso Di Ruzza, the director of the Vatican’s Financial Information Authority (in Italian, Autorità di Informazione Finanziaria, or A.I.F.), the Vatican’s financial watchdog, effectively the organ of control against money-laundering and possible financing of terrorism. Msgr. Carlino is said to be living in the Vatican guesthouse of Santa Marta where the pope resides.

The three other Vatican employees mentioned in the order are: Vincenzo Mauriello and Fabrizio Tirabussi, who appear to have posts of responsibility in the offices of the Secretariat of State, and Caterina Sansone, an employee in the administration of the same secretariat.

The magazine said Mr. Tirabussi manages “the financial investments in the Secretariat of State” and alleges that the financial scandal is linked to the buying and selling of real estate abroad, especially prestigious buildings in London, and that some “strange English companies” are involved in the business.

The Italian weekly says the “financial scandal” involves financial operations involving millions of euros “apparently conducted irregularly by some offices of the Secretariat of State.” It said that the news is causing not only laypeople “but also monsignors, and some say powerful cardinals, to tremble.”

It said that top officials of the Vatican Bank, known formally as the Institute for the Works of Religion, and the auditor general had informed Pope Francis about this at the beginning of summer, alerting him to the possibility of major financial crimes that took place in years past. According to the report, the pope “ordered an immediate and most severe investigation, without making concessions to anyone.”

It said yesterday’s raids by Vatican police were part of that investigation.

The weekly alleges that the Vatican investigations are also “analyzing the flow of funds that transited through the Peter’s Pence offerings,” which are given by the faithful to the pope each year, but it provides little evidence for this claim.

I hope you follow-up to this story.

That's what comes of putting Peter's Pence in the care of a Dalek!

We are financial consultants providing reliable loans to individuals and funding for business, home and projects start up. Are you tired of seeking loans or are you in any financial mess. Do you have a low credit score, and you will find it difficult to get loans from banks and other financial institutions? then worry no more for we are the solution to your financial misfortune. we offer all types of loan ranging from $3,000.00 to $600,000,000.00USD with a low interest rate of 2% and loan duration of 1 to 33 years to pay back the loan secure and unsecured. Are you losing sleep at nights worrying how to get a Legit Loan Lender? Contact us via Call/Text +1(209)643-7283 Email: brianloancapital@gmail.com