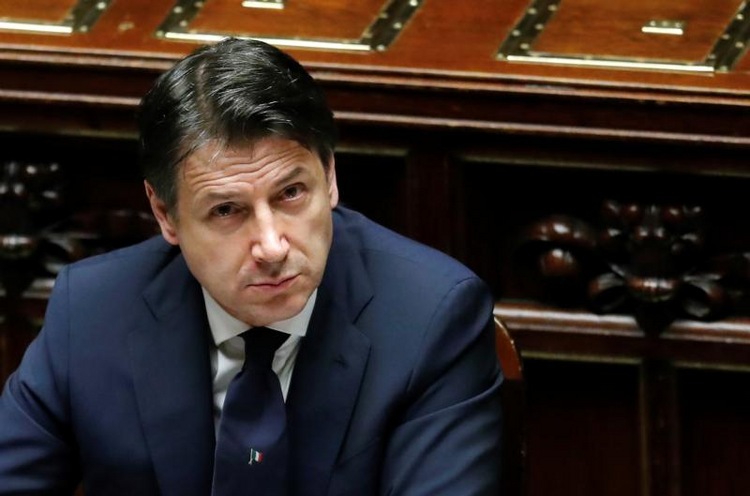 Italian Prime Minister Giuseppe Conte attends a session of the lower house of parliament on COVID-19 in Rome April 21, 2020. In an April 26 statement, the Italian bishops' conference accused the government of adopting plans to ease the country's COVID-19 lockdown rules in a way that "arbitrarily excludes the possibility of celebrating Mass with the people." (CNS photo/Remo Casilli, Reuters)

ROME (CNS) -- The Italian bishops' conference accused the government of adopting plans to ease the country's COVID-19 lockdown rules in a way that "arbitrarily excludes the possibility of celebrating Mass with the people."

The statement was released April 26 shortly after Prime Minister Giuseppe Conte announced a very gradual easing of the lockdown measures in stages through June 1. The measures foresee the possibility of once again holding funeral services, with a maximum of 15 people present, beginning May 4, but not regular Masses.

The bishops said Catholics had "accepted, with suffering and a sense of responsibility, the government limitations imposed to face a health emergency." Masses with the public present and all other gatherings of any kind have been banned in Italy since March 9.

But during their talks with the government over the past month, the statement said, the bishops explained "in a very explicit way that once the limitations imposed to deal with the pandemic began to be reduced, the church demands that it be able to resume its pastoral work."

"Now after weeks of negotiations in which the CEI (the bishops' conference) presented guidelines and protocols to be used during the transition phase in full conformity with all the health norms," the bishops said, Conte's plan "arbitrarily excludes the celebration of Mass with the public."

The prime minister and his COVID-19 task force "must distinguish between their responsibility, which is to provide precise indications in matters of health, and that of the church, which is called to organize the life of Christian communities with respect for the measures enacted, but also in the fullness of its own autonomy," the bishops' statement said.

Very late April 26, the prime minister's office responded with a statement saying Conte "takes note" of the bishops' statement. "In the coming days, a protocol will be studied that would allow the faithful to participate in liturgical ceremonies in maximum safety as soon as it is possible."

Conte announced his plan for "Phase 2" of handling the pandemic on the same day that the country's civil protection service announced that almost 200,000 Italians had been infected with COVID-19 since February, including 256 people in the previous 24 hours. More than 26,600 people have died in Italy, including 260 in the 24 hours between April 25-26.

A few public construction projects and large factories were allowed to reopen April 27, but with strict measures in place for social distancing, disinfection of surfaces and a requirement that people working in enclosed spaces wear masks.

As of May 4, small funerals will be allowed, individuals will be permitted to visit family members, most factories will reopen and people will be able to go to a restaurant to order food to take away; during the lockdown, only home delivery was allowed.

Public parks and gardens also are set to reopen May 4, but playgrounds still will be off limits. People will be allowed to go out for exercise -- until now exercise was not a valid excuse to leave one's home -- but social distancing must be maintained, and no team sports are permitted.

Stores and museums will be permitted to reopen beginning May 18, but only if they can guarantee social distancing. The reopening of coffee bars, restaurants and hair salons has been postponed at least until June 1, and schools will not reopen until September, Conte said.