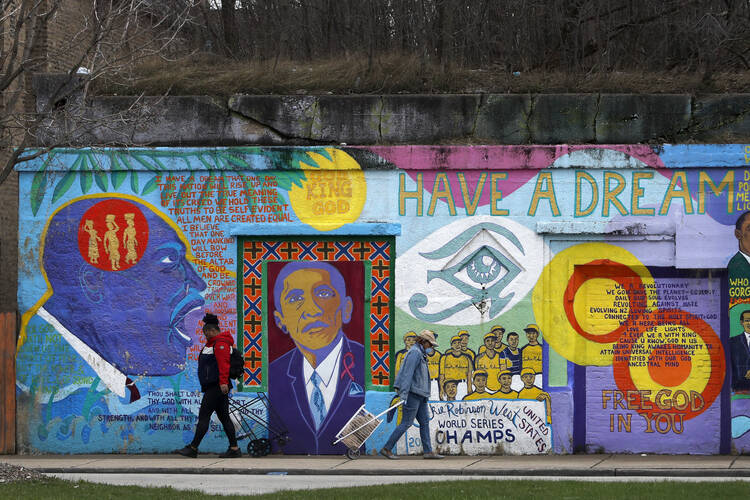 In this April 7, 2020, photo, two women pass each other and an African-American mural as they travel to and from a local grocery store on Chicago's Southside. As the coronavirus tightened its grip across the country, it is cutting a particularly devastating swath through an already vulnerable population, black Americans. (AP Photo/Charles Rex Arbogast)

In 1832, a cholera epidemic swept across Europe and the major cities of North America, killing more than 100,000 people and sickening many thousands more. When Archbishop James Whitfield of Baltimore fell ill with the disease, a member of his staff immediately sought the assistance of a local nun to aid in the battle for the prelate’s life. Curiously, though, Archbishop Whitfield’s subordinate did not call on the favored and all-white Sisters of Charity, who had a formal nursing ministry in the city. Instead, the assistant requested the care of Sister Mary Anthony Duchemin, an early member of the all-black Oblate Sisters of Providence who had worked as a private nurse for one of Baltimore’s wealthiest families before entering religious life.

An Afro-Creole native of Saint Domingue who immigrated to the United States during the Haitian Revolution, Sister Mary Anthony Duchemin is best known today as the mother of Sister Theresa Maxis Duchemin, one of the four original members of the Oblate Sisters of Providence and the long unacknowledged African-American foundress of the Sisters, Servants of the Immaculate Heart of Mary. But 13 years before her daughter made history as an early American Catholic foundress, Sister Anthony Duchemin became a legend in her own right for her valiant service to Baltimore’s black and white communities during the 1832 epidemic.

Since the outbreak of Covid-19 in the United States, I have thought often about Sister Mary Anthony Duchemin and the extraordinary sacrifice that she made to the church and community at large in 1832.

At the beginning of the outbreak, Sister Duchemin, the only member of her order trained as a nurse, volunteered her services to the poorest and most vulnerable Baltimore residents at the city’s almshouse, where she and three other oblates labored, though separately because of segregation, with the Sisters of Charity.

Upon receiving the call to aid Archbishop Whitfield, Sister Duchemin, like any dutiful Catholic and nun, quickly obliged. She spent two weeks nursing the archbishop back to health and then returned to her duties at the almshouse. Sister Duchemin, however, was soon called back to the archbishop’s residence to nurse his housekeeper, who had also contracted cholera. Within 24 hours of being recalled, Sister Duchemin herself succumbed to the disease, becoming, as the Oblate foundresses put it, “a victim of her zeal” and “martyr to her charity.”

Since the outbreak of Covid-19 in the United States, I have thought often about Sister Mary Anthony Duchemin and the extraordinary sacrifice that she made to the church and community at large in 1832. In recent weeks, Catholic writers have looked to the Black Death of the Middle Ages and the Spanish flu epidemic of 1918 for examples of selflessness and hope in the midst of pandemic and despair. But the Catholic experience during the 1832 cholera epidemic in Baltimore offers some of the best parallels to our contemporary crisis. This is especially true in the wake of increasing reports that black Americans are suffering disproportionate rates of infection and fatality. The Associated Press has estimated that black Americans constitute as many as one-third of the nation’s reported deaths from Covid-19, although they make up only 13 percent of the population.

During the 1832 cholera epidemic, Baltimore’s free and enslaved black population—relegated to substandard housing conditions and subjected to daily discrimination—also experienced disproportionate rates of infection and morbidity. At times, African-Americans constituted as many as half of the port city’s weekly deaths from the disease. By the time the epidemic subsided, free African-Americans, who were only 14 percent of Baltimore’s population, made up 28 percent of the city’s deaths from cholera.

During our current crisis, most black and brown Americans have been unable to exercise the most basic precaution of staying at home because they have jobs that do not permit them to telecommute or are deemed “essential.” Today, many of these workers are being lauded as heroes. But Sister Duchemin’s story also serves as a cautionary tale for anyone who thinks that our nation will continue to honor the lives of all those serving on the front lines of the Covid-19 pandemic when the disease is finally contained—or will work to change the unjust structures that put so many of those lives at risk in the first place.

Following Sister Duchemin’s death, the three Oblate Sisters of Providence (all teachers by training) remained stationed at the almshouse and continued their life-saving nursing work until the cholera epidemic subsided. In the weeks and years that followed, however, church leaders and all but one city official systematically erased the Oblates and their courageous service to Baltimore’s black and white communities during the crisis from local memory, instead only citing and championing the Sisters of Charity. While one Catholic directory published in 1833 included an obituary for Sister Duchemin and noted that she died “a victim of charity during the cholera [epidemic],” her religious name was misspelled and her surname was altogether omitted—unlike that of her white counterparts.

The coronavirus has exposed a truth that many scholars, health care professionals and activists of color have forcefully professed for decades: Racism literally kills people.

Even Archbishop Whitfield, who owed his life to Sister Duchemin, maintained his commitment to white supremacy and segregation until his death in 1834. As the historian Diane Batts Morrow revealed in her book Persons of Color and Religious at the Same Time, the archbishop made no mention of Sister Duchemin or her service to his household during the cholera epidemic in his last will and testament. Although his will did include the Oblates, Whitfield relegated them to a separate page from the city’s white sisterhoods and left the black sisterhood the smallest bequest of all included beneficiaries. The slaveholding Carmelites received $1,000 and the slaveholding Sisters of Charity $500. He left the Oblates only $100. Whitfield’s successor, Samuel Eccleston, a slaver, also actively worked to suppress the Oblates in the archdiocese during his time as archbishop.

The Oblates’ experience during and after the 1832 cholera epidemic was by no means anomalous. The history of black nuns and black Catholics generally is littered with gut-wrenching experiences of anti-black racism and discrimination within the church, including its health care system.

Although it is unclear when the worst effects of Covid-19 will be behind us, what is certain is that the nation’s black and brown communities will be uniquely traumatized and in need of true solidarity, mercy and long-overdue justice.

The coronavirus pandemic has not only magnified longstanding racial inequities in access to health care, housing, food security, income and jobs but also exposed a truth that many scholars, health care professionals and activists of color have forcefully professed in the face of strident denial for decades: Racism literally kills people.

If the Catholic Church is truly invested in the flourishing of the entire human family, then it must finally make racial justice a leading priority. It must also begin to understand what African-Americans, especially women, more than any other group foresaw and fundamentally understood in 2016: The violence of white supremacy is never exclusively reserved for black people but always imperils all. If this is not understood, history has already made clear that we will be here again or somewhere much worse.

Shannen Dee Williams is the Albert Lepage assistant professor of history at Villanova University. She is completing her first book, Subversive Habits: Black Catholic Nuns in the Long African-American Freedom Struggle, to be published by Duke University Press.

@BlkNunHistorian
Show Comments ()
Join the conversation: Login or create an account
Before you can comment, you need to update your profile to include your first and last name, as required in our comments policy. Then reload this page and you'll be set up for commenting. Update your profile