Finding God in a commercial? What I learned from an unconventional advertising project. 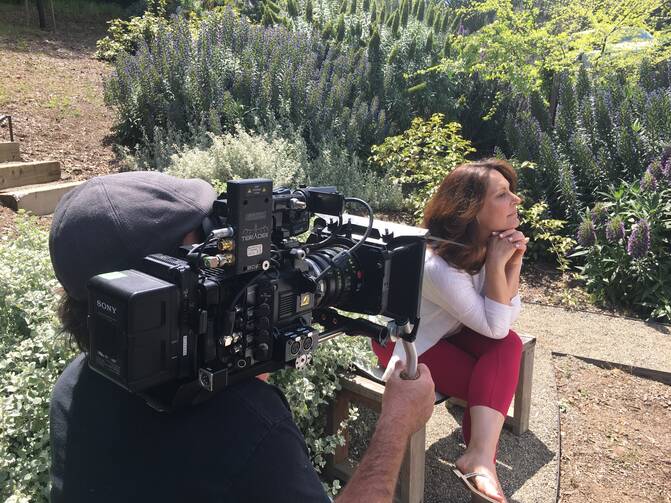 A woman poses during a shoot for a Sacred Story Institute commercial (photo courtesy of Paul Venables).

If St. Ignatius Loyola had a tagline, it would be “God in all things.” And he would probably hate it.

It seems to be a misconstrued way of looking at things—particularly inanimate objects—and pondering God in them. Is God in this glass of water? This pen? The TV remote? My Jesuit mentors have suggested that Ignatius would prefer we add the word laboring: God laboring in all things. Much of his Spiritual Exercises focuses on this. Our God is not looking down on us from afar; he is busy here, in the mess, right now. Our everyday-busy-life mess as well as our shelter-in-place mess. God is with us, working in and through all things.

I know a thing or two about taglines because I founded and run a world-class advertising agency—a creative, modern, San Francisco-based, innovation-oriented advertising agency. If that description does not give you a hint of “modern secularism,” trust me when I say that advertising, as an industry, seems to be the proud poster child of it.

If St. Ignatius Loyola had a tagline, it would be “God in all things.” And he would probably hate it.

Advertising puts that “in all things” notion to the test. Aren’t ad people hucksters and shills? Aren’t they part capitalist, part predator, selling the unsuspecting public things they don’t need? How could God be working in an ad agency?

I discovered on a recent project that he is. And he needed some commercials.

The project started with failure. The founder of a well-known Catholic ministry approached me about doing some commercials for his nonprofit. A friend and I generated a whole pile of very good ideas, but he bought none of them.

He did, however, pass my name along to Bill Watson, S.J., who wanted help with an idea he had for promoting the Sacred Story Institute, an Ignatian apostolate dedicated to introducing people to the daily Examen prayer. He pitched his idea. It was just awful enough for me to have pity on him and offer to help.

I am not an anxious type, but I began to worry. How could I pull off executing video ideas for a religious-based organization without creating issues at work? People here know I am Catholic. They know my faith matters to me. But I worried about the consequences if people felt that I showed favoritism to certain people or a specific religion. I did not want my employees to feel pressured or excluded in any way. That would work directly against the kind of inclusive, diversified-yet-unified place I have spent almost 20 years building.

I had to tread lightly, which triggered the internal voices: Aren’t you proud of your faith? If people are offended by your faith, the heck with them. Who cares if they’re upset?

Thanks to my friend Ignatius (I have done the 19th Annotation of his Spiritual Exercises and am currently in the midst of a three-year course to become a spiritual director), I had some tools for discernment in the midst of those aggressive, anxiety-producing voices. The voices did not come bearing peace, calm or harmony; they promoted division. These were the voices of the enemy, the false self. To realize that, I needed to look no further than the potential fruit of the project: to help people consider God, not make them feel excluded.

Shortly after, our laboring God promptly revealed his work. I was sharing my dilemma with my friend and co-worker, Mary, and she offered to help. She proposed that she could discreetly ask a few people if they would be willing to help with “a personal project of Paul’s.” It was a faith-based project but not an official agency effort, she would say. She would ask for volunteers to do pro bono work. If there was not interest or time, no harm, no foul.

As I would discover again and again throughout this project, God often uses human hands for his labor.

She only needed to ask one person. Byron, a creative director from the art side at the agency, offered the exact complementary talents I sought. As Mary tiptoed around asking him if he was interested, a big grin overtook his face. He explained that just a month or so ago, his sister-in-law, who is a religious sister, pulled him aside and told him none-too-gently that he needed to use his talents for the faith. He had been actively looking for an opportunity to do just that when Mary pitched this “personal project” of his boss.

We immediately set out to top Father Watson’s idea. We came up with something simple—we knew we would have to pull off the production using favors rather than cash. We wanted it to be relatable, to all ages, in these modern times. We wanted it to sort of sneak up on the viewer, to pull them in and then reveal the reason for the message.

We found our hook: “Just 15 minutes.” As life flies by, that is all you need to hear God and change your heart in a simple daily Examen. It is both the training wheels of prayer and, according to Ignatius, the most important habit to cling to. In this, the time of the Great Pause, it seems quite natural to encourage people to take 15 sheltering minutes, quit the endless Facebook scrolling, close the laptop and look at the moments and emotions of their day to see where God is laboring in them.

We were fortunate that Father Watson recognizes good ideas when he sees them. The next challenge was production. Any two knuckleheads can have a few ideas, but the wheat gets separated from the chaff in execution. And execution costs money.

I gingerly turned to my dear friend, known as the Godfather of West Coast Production: Craig Allen. He is a lovable, agreeable, wise, seasoned professional—but one who has retreated from his Catholic upbringing. Could he at least steer us in the right direction? Would he be uncomfortable with the faith element?

As I would discover again and again throughout this project, God often uses human hands for his labor. Not only was Craig in, but he called on his impeccable reputation to pull in the editor, the line producer, the director of photography, the mix engineer, the music composer, the sound effects guy and even offered his home as a shoot location and his mug to be the talent in a couple of the spots. Craig’s ripple effect continued as those folks in turn brought their own help and assistants. We had our crew and our post-production team in place. Apparently, God works as a production company agent, too.

I have been on hundreds of commercial sets in my career. This one was different. Very few members of the cast and crew were Catholic or even Christian. Many were among those puzzling “nones” we keep hearing that we as a church need to appeal to. But there was an undeniable energy, a vibe, to every step of this production. People knew there was something good and right they were contributing to. I think they instinctively knew that the world needs more of this stuff—which was true back when we created the spots a year ago and perhaps more so now, when Father Watson has decided to release them. As life these days feels increasingly otherworldly, it might just be time to turn to the otherworldly.

Is God still good during the coronavirus pandemic?
Juan Vidal

The resulting six videos are not the most amazing things I have ever helped create. They are not as clever as the Super Bowl spots I have done. They are not as slick as most campaigns I have produced. But there is a charm to them, a simple heart. And they, in somewhat miraculous fashion, brought together a ragtag volunteer army to collaborate and lend their talents to promote listening to God. In my book, that’s good work.

Perhaps this project, both the process and the finished product, will shed a glimmer of light on those mysterious ways God acts in our lives. Perhaps we can then apply some of that glimmer and be inspired to look for evidence of God laboring now, even in a lockdown. 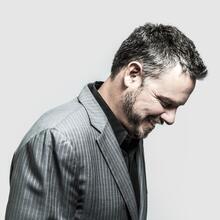 Paul Venables is the founder and chairman of Venables Bell & Partners, an industry-leading advertising firm in San Francisco.