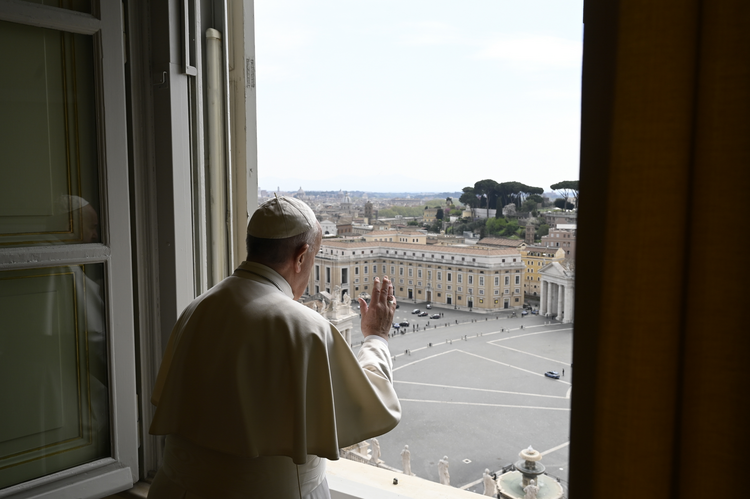 Pope Francis gives his blessing from the window of the library in the Apostolic Palace on April 13, 2020, after a live transmission of the "Regina Caeli" prayer. (CNS photo/Vatican Media)

On Easter Monday, Pope Francis offered solidarity and prayers to the people of the United States and other countries hard hit by Covid-19. He also singled out the crucial role women have played in combating the pandemic, comparing them to the faithful women of the Gospel resurrection accounts who bore witness to the risen Lord while the disciples were still in hiding.

He expressed his “closeness and affection” for “all those countries hard hit by the coronavirus, with a great number of persons infected and dead” and “in a special way, Italy, the United States of America, Spain, France.” He said “Do not forget that the pope is praying for you, he is close to you.”

He made his remarks after reciting the Regina Caeli prayer to Our Lady at midday on Easter Monday, April 13, in the private library of the Apostolic Palace in the Vatican. The prayer was transmitted live by Vatican Media.

He expressed his “closeness and affection” for “all those countries hard hit by the coronavirus, with a great number of persons infected and dead”

Earlier he recalled the Gospel story read at the Easter Vigil which told how Jesus, after his resurrection, met the sad and frightened women who had visited his tomb and told them “do not be afraid” and then assigned them “a missionary mandate” to tell his disciples to go to Galilee where he would meet them. Pope Francis remarked that those women “had given an admirable example of fidelity, dedication and love of Christ during the time of his public life and during his passion, and now Jesus rewards them, with a gesture of special attention and love.”

In this context, Francis drew attention to the role women are playing today in the midst of the coronavirus pandemic that has hit countries across the world, infecting almost 2 million people, causing the deaths of more than 100,000 and paralyzing the world economy due to enforced travel restrictions and quarantines.

“I would like to call to mind the efforts of so many women during this health crisis, taking care of other people.”

“I would like to call to mind the efforts of so many women during this health crisis, taking care of other people,” he said. He mentioned in particular women who are “doctors, nurses, members of the security forces and prison guards, and employees in stores providing basic necessities.”

He also recalled the “many mothers, sisters and grandmothers who are confined to their homes with their entire family, with children, the elderly and persons with disabilities.” He noted that sometimes “they are at risk of violence due to a living situation in which they bear a burden that is way too heavy.”

Pope Francis invited his virtual audience “to pray for them, so that the Lord may grant them strength, and that our communities might support them together with their families.” And, he added, “may the Lord give us the courage of women always to go forward.”

Before bidding a final farewell, the pope renewed his Easter greetings and invited everyone to “remain united in prayer and in the commitment to help each other as brothers and sisters.”

He then went to the study window of the papal apartment from which he normally greets pilgrims and tourists in St. Peter’s Square on Sundays. He looked out at the empty square, and then imparted his blessing to his virtual audience.