Reading St. Ignatius in a time of quarantine 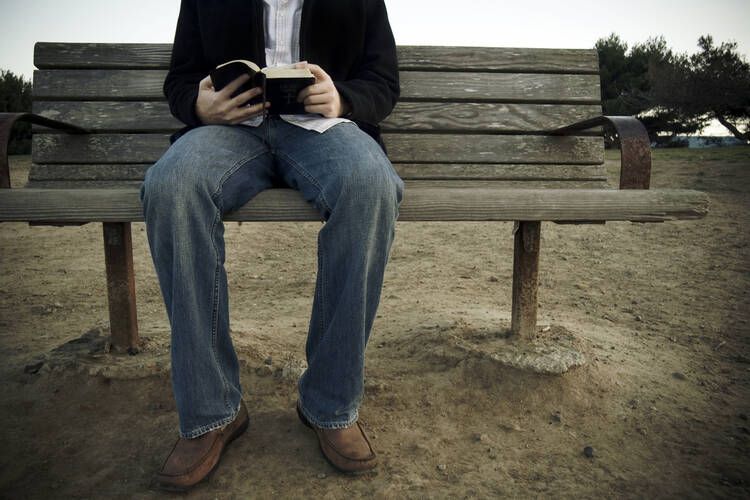 How do we stay spiritually connected to God, ourselves and others in this time of coronavirus quarantine? Although we find ourselves separated for now from the sacraments, God’s love for us has not been quarantined, and it is even possible to make an Ignatian retreat from home as we enter Holy Week and Easter season.

In this excerpt from his new book, The Spiritual Exercises of St. Ignatius of Loyola: With Points for Personal Prayer from Jesuit Spiritual Masters,Americaspecial contributorSean Salai, S.J., introduces No. 22 from the Exercises with a “prelection” (an Ignatian pedagogical term for “reading out” a lesson ahead of time) that consists of a brief commentary and journal exercise meant to facilitate self-guided prayer with the saint’s text.

Although we find ourselves separated from the sacraments, it is possible to make an Ignatian retreat from home as we enter Holy Week.

Readers who wish to make the Spiritual Exercises from home during this pandemic can find Father Salai’s book, available in Kindle and hardcover, to purchase online.

“I know that friends and parents are always upset by the departure of those they love. But I look at it in a different way. Supposing that my father and mother were here on the one side, together with my sister and other relatives, and on the other Our God and Lord with his, and I hope, my Blessed Mother; and suppose my parents said, ‘Dear son, we beg you, do not leave us; we ask this in return for the labors and cares we have endured for your sake....’ And suppose Jesus said, ‘Follow me. I was born for your sake, scourged for you, crowned with thorns and crucified for you. See the five sacred wounds I suffered for you. Have you forgotten that I have fed your soul with my holy Body and given it my sacred Blood to drink? Are you not ashamed of your lack of gratitude to me?’ Dear Father and Mother, whenever I think on this my heart is on fire, and I would wish if I could to enter the religious life on the spot. My mind and heart have no peace until they find their beloved.”

Father Salai:Like his fellow Jesuit boy saints, Aloysius Gonzaga and Stanislaus Kostka, St. John Berchmans (1599–1621) died young as a seminarian, well before ordination. The son of a working-class Belgian shoemaker and an invalid mother, Berchmans died in Rome without any great exploits to his name, yet somehow earned a reputation for doing ordinary things with joyful passion. When 17-year-old John, a boarding student at the Jesuit high school in Mechlin, had first felt called to become a Jesuit, his parents angrily told him to get a job to support the family instead—to at least become a diocesan priest, rather than take the Jesuit vow of poverty, so he might draw an income and live closer to home. In a letter, his parents reminded John of all they had done by feeding and providing for him. But in his reply let­ter that Jesuits now read on his feast day, the teenage John gently but firmly held his ground, presenting his choice as a response to the invitation of Jesus and not an attack on his family.

Resisting the temptation to react defensively against his parents, young John Berchmans exercised the “Ignatian plus” by putting a good interpreta­tion on their words.

Comparing how his parents had provided for him to how Jesus had died for him on the cross, Berchmans expressed gratitude for his family and refrained from angry accusations as he wrote the difficult but heartfelt words quoted above. Resisting the temptation to interpret their concerns nega­tively and react defensively against his parents, young John exercised the “Ignatian plus” by putting a good interpreta­tion on their words, an attitude St. Ignatius recommends below in his Presupposition as a basis for relations with authority figures—a text he wrote in Paris, from which John Calvin had just fled and in which the first Jesuits continually faced theological controversy. Because St. John Berchmans chose to receive his parents’ concerns with positive presuppo­sitions and respond accordingly, gently pointing out that he acted out of gratitude to Jesus rather than rebelliousness, his parents finally softened their resistance to his vocation and supported his entry into the Society of Jesus.

As you read the Presupposition of St. Ignatius, reflect in your journal: When have I reacted defensively to someone else’s words, assuming the worst and taking premature personal offense? When has my negative interpretation of others’ motives provoked them to similar anger and fear, making a bad situation worse? What helps me suspend my judgment of another person’s words or actions, striving to put a favorable interpretation on his intentions in a way that helps us remain friends in the Lord?

Presupposition: “That the relations between him who gives the retreat and those who make it may be as agreeable and as profitable as possible, neither must lose sight of this advice: every good and pious Christian must be disposed to receive in a favor­able sense and to take in good part every word susceptible of being so received and understood, rather than to take it in a rigorous and objectionable sense. If it happens that the expression is not defensible, ask the person his intention in saying it; and if he is really in error, point it out to him in a charitable manner, that he may set himself right on the point.”