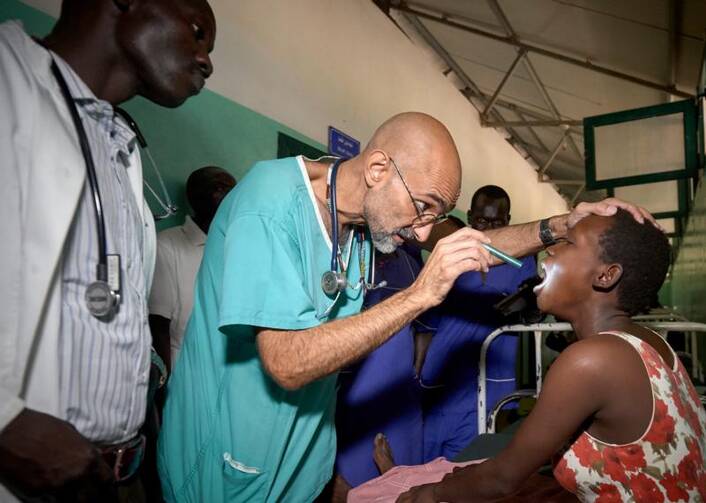 Dr. Tom Catena, a Catholic lay missionary from the United States, examines a patient during rounds at the Mother of Mercy Hospital in Gidel, a village in the Nuba Mountains of Sudan. Pope Francis established an emergency fund to help communities in the Catholic Church's mission territories affected by the 2020 coronavirus pandemic. (CNS photo/Paul Jeffrey)

Africa, Asia, Oceania and parts of Amazonia that “are being tragically impacted by the spread of the coronavirus pandemic” will be supported by a new emergency fund established by Pope Francis, the Vatican announced on April 6. The fund will be used by church structures and institutions in these countries.

Cardinal Luis Antonio Tagle, the new prefect of the Congregation for the Evangelization of Peoples, has overall responsibility in the Roman Curia for the 1,110 dioceses in those regions. He welcomed the new initiative: “In her task of evangelization, the church is often on the front lines of major threats to human well-being.”

Cardinal Tagle: "“In her task of evangelization, the church is often on the front lines of major threats to human well-being."

The Filipino-born cardinal noted that in Africa alone, which has a population of 1.3 billion people in 54 countries, “more than 74,000 religious sisters and over 46,000 priests are operating 7,274 hospitals and clinics, staffing 2,346 homes for elderly and the vulnerable and educating over 19 million children in 45,088 primary schools.” In many rural areas they are the only providers of health care and education. Although 19.4 percent of Africans are Catholic, these church structures and institutions reach out to all people in need in the continent, not just church members.

The church has similar health care and educational structures in Asia, a continent with a population of 4.6 billion people, 3.3 percent of whom are Catholic, and provides health care, charity assistance and education to people of all faiths and none. These institutions will also benefit from this emergency fund, as will people in parts of Oceania.

Cardinal Tagle emphasized that Pope Francis “is calling upon the church’s entire vast network to face the challenges ahead.”

Pope Francis has designated $750,000 as an initial contribution for the fund through the Pontifical Mission Societies, which are the pope’s official channel for support of the church in mission territories.

The pope has designated $750,000 as an initial contribution for the fund through the Pontifical Mission Societies, which are part of the Congregation for the Evangelization of Peoples and are the pope’s official channel for support of the church in mission territories. Archbishop Giovanni Pietro Dal Toso, the president of this agency, explained in the Vatican press communique that “this fund has the aim of supporting the presence of the church in mission territories that also suffer the consequences of coronavirus.”

Foreign Support for the American Mission
Dennis A. Castillo

Archbishop Dal Toso said that through the church’s work of evangelization and practical assistance through its vast network, “we can show that no one is alone in this crisis” and the church’s ministers and structures can “play a vital role.” He appealed to the network of Pontifical Mission Societies present in every diocese around the world “to do what they can to support this important initiative of the Holy Father.”