Because of Covid-19, Pope Francis will celebrate Holy Week ceremonies without the public present 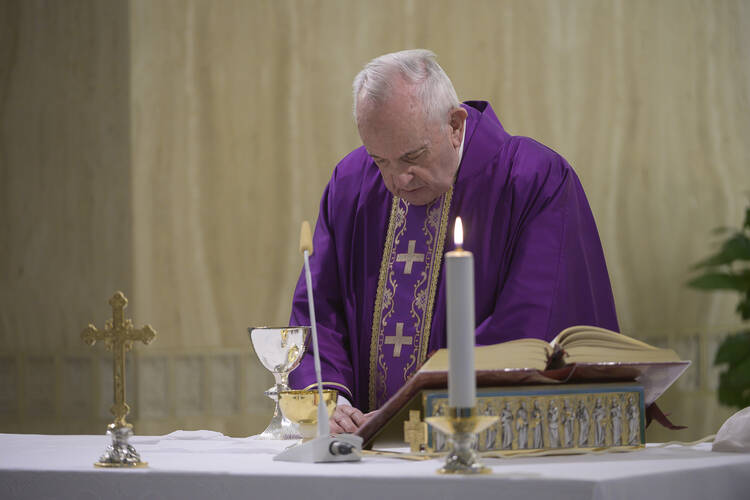 Pope Francis celebrates Mass in the chapel of the Domus Sanctae Marthae at the Vatican March 27, 2020. (CNS photo/Vatican Media)

Pope Francis will celebrate all the Holy Week liturgies in St. Peter’s Basilica without the participation of the lay faithful. He will celebrate these events at the altar of the Chair of St. Peter, which is located behind the main altar in the basilica, but he will preside at the Way of the Cross on the steps of the basilica.

The Vatican made the announcement on March 27 and explained that these adjustments are due to “the extraordinary situation” caused by the spread of the Covid-19 pandemic. It said the program for the papal celebrations was also decided after taking into account the decree issued by the Congregation for Divine Worship and the Discipline of the Sacraments on March 25.

While the Vatican statement makes clear that the pope will celebrate these liturgies without the physical presence of the lay faithful (“il popolo” in Italian), it is expected that some priests will be present to assist at these ceremonies, but not many and respecting the social distancing prescribed by the Vatican decrees to protect them from contracting the virus.

According to the revised program, Pope Francis will open the Holy Week celebrations on Palm Sunday, April 5, by celebrating Mass at 11 a.m. (Rome time) in the basilica as he commemorates the entry of Jesus into Jerusalem. There is no mention of a procession.

The Vatican explained that these adjustments are due to “the extraordinary situation” caused by the spread of the Covid-19 pandemic.

He will celebrate Mass commemorating the Last Supper on Holy Thursday, April 9, at 6 p.m. (Rome time). It should be noted that he will not celebrate the Chrism Mass on that morning as has been the tradition. It is expected that he will do so at a later date when the protective measures to combat Covid-19 have been lifted.

On Good Friday, April 10, Francis will celebrate the Passion of the Lord at 6 p.m. (Rome time) in the basilica. Later that evening, he will preside over the Way of the Cross on the steps of the basilica, overlooking the empty square. In the past, he used to travel to Rome’s Coliseum for this significant prayer service.

Pope Francis will celebrate the Easter Vigil on April 11, at 9 p.m., at the altar of the Chair of St. Peter.

On Easter Sunday morning, April 12, he will celebrate the Mass of the Resurrection of the Lord, in the basilica, and, at the end of Mass, he will impart his blessing “Urbi et Orbi”—to the city of Rome (“Urbi”) and to the world (“Orbi”).

The Vatican Media will broadcast all these celebrations by television and social media at the scheduled times, so that people across the globe may be able to follow them.