Pope Francis’ favorability ratings move up from their 2018 low 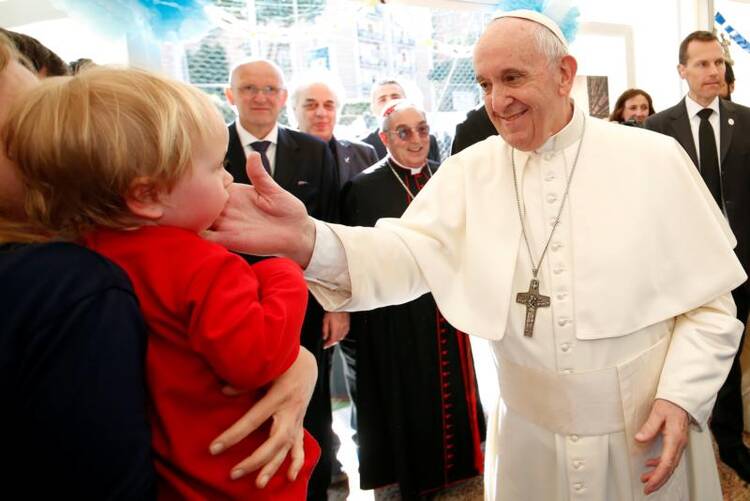 Pope Francis greets a child as he arrives to visit the Parish of St. Julius in Rome April 7, 2019. His favorability ratings among Americans of virtually all stripes are up from their low in 2018, according to a report released April 3, 2020, by the Pew Research Center. (CNS photo/Remo Casilli, Reuters)

WASHINGTON (CNS) -- Pope Francis' favorability ratings among Americans of virtually all stripes are up from their low in 2018, according to a report released April 3 by the Pew Research Center.

Among Catholics themselves, 77% have a "very" or "mostly" favorable opinion of the pope, based on responses by 270 Catholics during Pew telephone surveying in January.

That's five percentage points up from his low of 72% in September 2018, when the U.S. church had been buffeted by revelations of sexual misconduct by then-Cardinal Theodore E. McCarrick and the issuance of a Pennsylvania grand jury report that detailed sex abuse by more than 300 priests and other church workers in six of the state's dioceses over a 70-year period starting in 1947.

He also registered gains among non-Catholics. While Pope Francis had enjoyed majority support among white evangelical Christians in the past, a plurality of 43% now view him favorably, while 39% view him unfavorably. In the September 2018 survey, more evangelicals saw the pope unfavorably, 34%-32%.

White non-evangelical Protestants' favorability jumped from 48% in 2018 to 62% in January. Americans who consider themselves unaffiliated with any denomination gave the pope a 58% favorability mark, up from 52%.

Because of the relatively small number of Catholics surveyed, no breakdowns are available on such demographic characteristics like age, race and language, according to Claire Gecewicz, a Pew researcher and co-author of the report.

By comparison, Pew asked the "favorability" question of about St. John Paul II three times between 1987 and 1996. His net favorability rating was between 91%-93%. Pew asked the question five times during Pope Benedict XVI's 2005-13 pontificate, ranging from a low of 67% shortly after his election as pontiff to 83% during his 2008 pastoral visit to the U.S. The other three times he achieved 74%.

The same question has been asked about Pope Francis 10 times during his seven years as pope. His highest mark was 90% in February 2015. Prior to the two most recent polls, his previous low was 79% in September 2013, six months after he became pope. Otherwise, he has reached 81%-87% in polling.