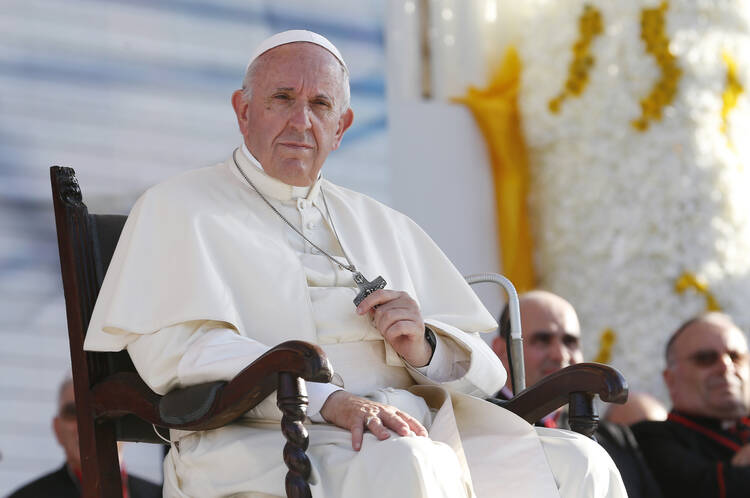 Catholics in the United States are standing by their man.

A new Gallup poll finds that even in the wake of the upheaval caused by revelations of sexual abuse by priests in Pennsylvania and allegations of a Vatican cover-up of sexual misconduct by a U.S. cardinal, 79 percent of U.S. Catholics hold a favorable view of Pope Francis—unchanged from last month but down about 8 points from when he visited the United States three years ago.

When it comes to the general U.S. population, however, the summer of scandals seems to be punishing the pope: Just over half of all U.S. adults—53 percent—hold a favorable view of the pope. That is down 13 percentage points from last month and down 23 points from a peak in February 2014.

Twenty-seven percent of Americans currently hold an unfavorable view of the pope, 8 percent have “never heard of” Francis and another 12 percent have “no opinion.”

Among non-Catholic Americans, 45 percent hold a favorable opinion of the pope, down from 63 percent last month and down from a high of 72 percent in 2014.

Among non-Catholic Americans, 45 percent hold a favorable opinion of the pope, down from a high of 72 percent in 2014.

“Similar drops in the pontiff's favorability have occurred among most other groups,” Gallup said.

The poll is reminiscent of a similar drop in favorability of Pope John Paul II, who led the church during a wave of sexual abuse scandals in the early 2000s.

“The percentage of Americans with a favorable view of John Paul fell precipitously from 86% in 1998 to 61% in 2002, after a sexual abuse scandal was uncovered in 2002,” Gallup wrote.

Francis remains more popular among the general U.S. population than his predecessor, Pope Benedict XVI. The final Gallup poll asking about Pope Benedict, in 2010, found 40 percent of Americans held a favorable view of him and 35 percent held an unfavorable view.

Allegations that Catholic leaders mishandled sexual abuse by clergy rocked the church in the United States this summer, beginning in June when former Cardinal Theodore McCarrick was removed from ministry after a complaint that he sexually abused a minor more than four decades ago was found credible. Later, a grand jury report detailing abuse by priests in Pennsylvania and a detailed letter from Archbishop Carlo Maria Viganò, the former nuncio to the United States, alleging a Vatican cover-up of Archbishop McCarrick’s misconduct added to the tumult. Law enforcement officials in a number of states now have plans to investigate how the church handled historical abuse complaints.

For his part, Pope Francis hosted two U.S. cardinals and an archbishop to discuss the handling of complaints against Archbishop McCarrick earlier this month, and a team of his advisers said the Vatican is preparing to respond to the Archbishop Viganò’s claims.

I remember Pope John Paul II well. His encyclicals and papal documents were very intelligent, beautifully written and showed why Catholicism was better than being just a Chrisitian: there was philosophical reflection and intelligent arguments in being Catholic. Alas, few laymen read anything by Pope JPII. The sede vacantists were gearing up, as they are now, and they rebuked him, Vatican II and the novus ordo. Sadly JPII met with the US Cardinals when Cardinal Bernard Law was exposed by the Boston Globe, and JPII did nothing. He did offer Cardinal Law a refuge in the Vatican to protect him, pathetically, from the US legal authorities as did Benedict VI. That was a huge and grave injustice to the victims of Bernard Law. JPII and B16 sinned against the victims.

Pope Benedict XVI was an incredibly intelligent pope as well, a scholar’s scholar, but he wasnt an administrator, was not a man for dirty and smelly sheep, preferring instead ermine furs, red shoes and desiring to be left alone in an ivory tower to write theological books as an academician. He did the right thing in retiring.

Pope Francis was courageous in doing what his two predecessors failed to do: dismantle the Curia and reform the Vatican machinery. I have served as a sponsor for several RCIA candidates and all of them have marveled at the icon of Christ found in Pope Francis. Pope Francis is a modern day St Francis, “rebuild my church” personified, and he is testimony that the Holy Spirit blows in the Church.

As for Vigano, EWTN, NC Register, and the usual suspects predating the papacy of JPII and as far back as St Augustine and Arianism, they do not bother new Catholics whom I have sponsored to the Church. They see God in the mystery of the Church whereas Sede Vacantists never did and never will.

As Fr. Thomas Rosica, a Canadian priest and CEO of Salt and Light Catholic Media Foundation, stated in 2016:
“Often times the obsessed, scrupulous, self-appointed, nostalgia-hankering virtual guardians of the faith or of liturgical practices are very disturbed, broken and angry individuals, who never found a platform or pulpit in real life and so resort to the internet and become trolling pontiffs and holy executioners!"

I see this gentleman is among those blind to the homosexuals taking power in the RCC with the cooperation of Pope Francis.

I for one am highly unhappy now with Pope Francis. It has become even more clearer to me today, after he let us know that he will not be allowing for women to have any vote in the upcoming synod, how he personally supports the misogyny in our church. I love how it got spinned out to us dummy laity too - that the synod rules don't forsee a way for women to have any vote. As though we are so stupid that we don't know that the rules of the synod and who can vote are completely up to the pope. He can allow only women to vote with bishops, if he wants, and can make sure that women outnumber bishops in votes, if he wanted to. I am so tired of hearing this pope pretend there is just nothing he can do about the sexism in our church. A sexism which supports and increases child abuse and pedophilia specifically in our priesthood.

Please Lord when will you send us a Just Pope and make us a Just Church who cares more about the Holy Spirit in a person than the person's body parts or skin type?

They didn't ask me - that is for certain.

Paul Being
4 years 2 months ago

The survey also found that U.S. Catholics’ ratings of Pope Francis had become less positive on some other issues, including spreading the Catholic faith and standing up for traditional morals. But seven-in-ten still said he was doing an excellent or good job in these areas. And an overwhelming majority (84%) expressed a favorable opinion of the pope overall, roughly unchanged in recent years.

Paul Being
4 years 2 months ago

Francis’ declining rating on the sex abuse scandal mirrors a pattern seen during the papacy of his immediate predecessor, Benedict XVI. By the time of Benedict’s retirement, in February 2013, just a third of American Catholics who were following the news of his resignation (33%) rated his handling of the issue as excellent or good – down from roughly half (49%) who held this view five years earlier.
Botox Manchester city