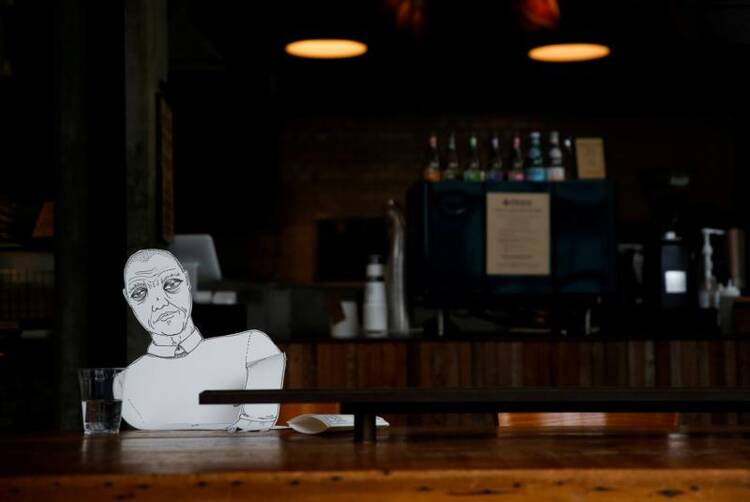 A paper cutout of a person sits at an empty table at a bagel cafe during the coronavirus pandemic in Seattle March 27, 2020. Outreach efforts by Catholic agencies continue in large part during the virus-mandated restrictions. (CNS photo/Lindsey Wasson, Reuters)

WASHINGTON (CNS) -- With so much Catholic charitable work being direct, face-to-face service, those efforts would be stymied in the face of such coronavirus-mandated restrictions as group-size limits and social distancing, right?

Outreach efforts continue in large part, but with creative twists, according to Catholic Charities affiliates and other church-run social service agencies throughout the United States.

In the Seattle Archdiocese, the first U.S. region where the COVID-19 pandemic hit with brute force, ingenuity has been the hallmark.

Erin Maguire, who does regional network building for Catholic Community Services of Western Washington, also supervises the "Prepares" program, which started four years ago amid reports there were no diapers in stores, putting poor families at a disadvantage.

Again, diapers are in short supply. Working with the 71 parishes in King County, which includes Seattle, the call went out March 28 to buy diapers. "We're buying all the diapers that we can so far. There aren't enough diapers to buy," Maguire told Catholic News Service. "We're going in asking if we can take all their stock." Following the purchases, she said, "we're dropping off diapers at the stoops of parents' homes."

Working with trained parish volunteers called "companions," "we're doing a lot of virtual visits with people," she added. "Instead of doing visits, they're doing it on the phone."

Many of its oldest shelter residents, who are over age 80, are now being housed in hotels if they're healthy and asymptomatic.

"One of the coolest things that I was really impressed with, we have some fundraising efforts," Maguire said. "We're raising money to hire some caterers owned by people of color who were very vulnerable to losing their business, so we pay them to make food for the people living in those hotels," partnering with the archdiocese and Maryknoll. "In this tough time, having some comfort food is a good thing," she added. "We've raised $10,000 so far to help those caterers."

In the Diocese of Spokane, Washington, Catholic Charities of Eastern Washington faced service-delivery disruptions in particular with seniors and the homeless.

With social distancing guidelines in effect, "we have to sleep everyone head to toe and 6 feet apart, so we lost half of our beds," said CEO Rob McCann. But "we opened three new shelters in three weeks. We turned the lobbies into pop-up shelters. There's social distance, but we still get everyone sleeping inside."

McCann added, "We've also had a very bad norovirus explosion a few years ago. In all of our apartments, we built quarantine dorm rooms. Thank God we built those, 'cause they're all full now."

Catholic Charities has instituted a "Shopping Angels" initiative in which residents buy a bag of food and drop it off at Catholic Charities headquarters. Volunteers sort it and prepare food-delivery packs to vulnerable seniors unable to leave home and shop for themselves.

In a weekly email sent to staff and volunteers March 20, a core principle for the agency is set forth:

"We are an organization who serves those in need. We are caretakers of the poor and sitting out or sitting on the sidelines is not an option for us. It’s our job to do that precious work and we have a scared obligation and duty to keep doing it, as best we can, even in the current COVID-19 world. The poor and vulnerable will be the hardest hit by what is coming and Catholic Charities intends to be there for them while at the same time protecting our staff and our organizational needs."

"We are operating every program but in a different way," said Jean Christofferson, marketing director for Catholic Charities Community Services in the Diocese of Phoenix.

With school districts in the diocese's seven counties shuttered, it posed a roadblock for the early education programs housed inside those schools.

"We would have had to close those pogroms even if we didn't want to," she noted. Instead, staffers are using Skype and Zoom to talk with parents, and "dropping off packets and supplies on the porches of people who don't have that capability, so they have something to do with their kids while this is going on," Christofferson said.

At Manna House, which provides transitional shelter for 76 homeless vets, staff "can keep them isolated if they have signs of COVID," she added. But the general homeless population is a tougher nut to crack. They are "probably more vulnerable than anybody right now," Christofferson told CNS.

So staff developing called "shoutreach" instead of outreach. Wearing gloves, masks and personal protective equipment, "we shout at them: 'What do you need? What can we help you with?'" Christofferson said. The answers are typically food, water, and hygiene items. Staff and volunteers also try to help them with resources, she added, as "the landscape has changed, especially with homelessness," as government edicts make the situation highly fluid.

Reached by CNS March 30 -- the first day of a Kansas statewide stay-at-home order -- "we had to scramble to get ready," said Debbie Snapp, executive director of Catholic Charities of Southwest Kansas, which covers the Diocese of Dodge City. "We thought we would have a little more time to do that."

"What we used to do face-to-face we do by telephone, by teleconferencing," Snapp said. "One goal of ours: All our health specialists have all switched to telemed so they can continue their counseling services."

Snapp was literally the only one minding the store at Catholic Charities headquarters. "Somebody has to deal with the mail, deal with the bank," she said. "I've not done much of anything except go to my house and the office for the past three weeks."