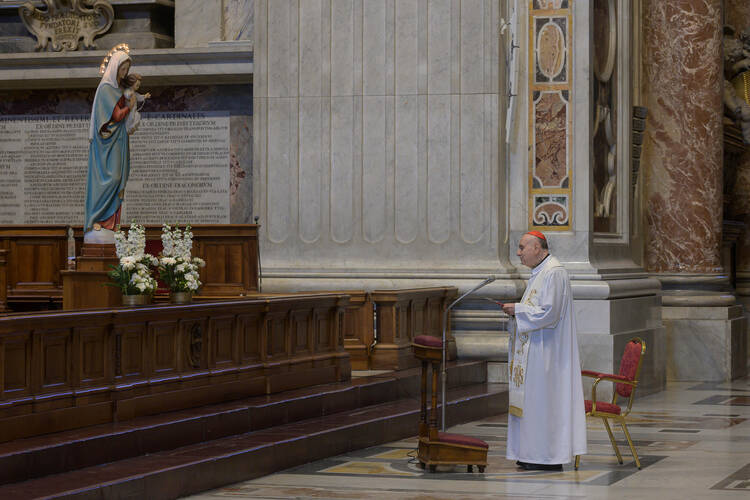 Cardinal Angelo Comastri, archpriest of St. Peter’s Basilica, leads a Marian prayer service in the basilica at the Vatican on March 11. In attendance were some Vatican employees seated one meter apart as a precaution against the coronavirus. (CNS photo/Vatican Media)

As I write, I am watching a livestream of the Mass that—up until 2 p.m. yesterday, when the Archdiocese of New York suspended public liturgies as part of the effort against the coronavirus epidemic—I was scheduled to preside for. Once the parish was down to only the one Mass, via livestream, the pastor took it, and I’m grateful that I was spared the need to get on the subway today.

We had Mass earlier this morning in our Jesuit community, in our own small chapel, and I don't think we have ever been more conscious of the power of the Mass or of our own dependence on God as ministers than knowing that our small community is able to have Mass in person while the vast majority of people around us are relying on video streams for Mass today.

Every Mass is a Mass for the salvation of the world, because every Mass is Christ's sacrifice for all of us.

But every Mass is a Mass for the salvation of the world, because every Mass is Christ's sacrifice for all of us, no less with 10 priests in one small chapel than with the pope and tens of thousands of the faithful in St. Peter’s Square, or with 500 parishioners at St. Francis Xavier on 16th Street, where I had expected to be this morning.

The Mass has power whether we are able to be there in person or not; it has power even if it can only be celebrated under limited and restricted circumstances, because God is not bound by circumstance.

The Mass has power whether we are able to be there in person or not, because God is not bound by circumstance.

Some people may suggest that recognizing the power of the Mass should make us so courageous that we throw caution to the winds and trust in God to protect us—“Don’t you trust God more than you fear the coronavirus?” they ask. But that gets the question of trust exactly backward.

Trust God enough to know that the Mass is being offered for us, all over the world, in small chapels in religious houses and in cathedrals that are eerily empty of people, in hospitals and prisons, with people joining in prayer via YouTube and Facebook Live and radio and local access cable television and every other form of communication that human innovation has devised.

Trust the promise of God that the Sabbath was made for human beings rather than human beings for the Sabbath. Trust the assurance of the church that the Sunday obligation, even under normal conditions, does not bind when traveling to Mass is impossible or imprudently dangerous.

Trust that the scientific knowledge that tells us how necessary it is to limit large public gatherings is itself a gift of God. And that gift calls us to exercise our charity by recognizing that every time we can avoid the risk of catching or passing on this epidemic, we are acting in solidarity with those who are most vulnerable to this disease, with the public health workers who are heroically on the front lines of this crisis and indeed with the whole world. Trust that God gives us courage in order to act wisely and not just boldly.

And above all, trust that it is God who makes the Mass and the Eucharist both possible and powerful. And that power is sufficient even if we are limited to participating through a livestream.

@SSawyerSJ
Show Comments ()
Join the conversation: Login or create an account
Before you can comment, you need to update your profile to include your first and last name, as required in our comments policy. Then reload this page and you'll be set up for commenting. Update your profile
Show Comments ()
Comments are automatically closed two weeks after an article's initial publication. See our comments policy for more.