Pope Francis: All priests training to be Holy See diplomats must spend one year in missionary service 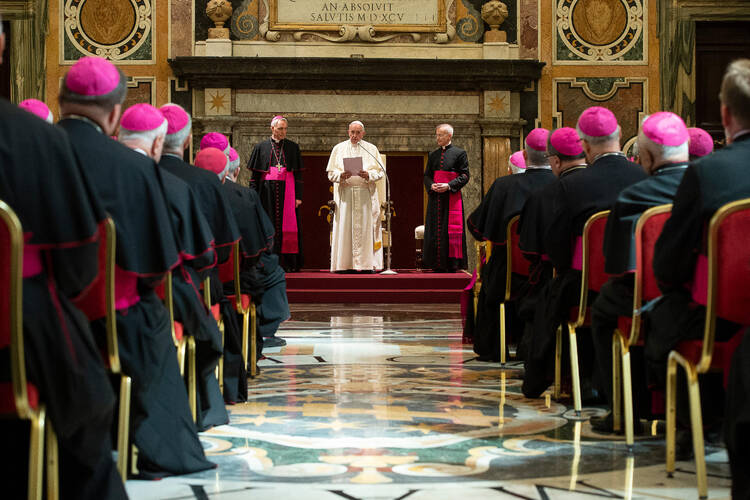 Pope Francis addresses nuncios from around the world during a meeting at the Vatican June 13, 2019. The pope encouraged the Vatican diplomats to be men of God, not luxury seekers. (CNS photo/Vatican Media)

Pope Francis has radically reformed the formation program for all priests preparing for the Holy See’s diplomatic service by decreeing that from now on they must spend one year of their formation period “dedicated entirely to missionary service in the local churches scattered across the world.” He stated this in a letter to the new president of the Pontifical Ecclesiastical Academy, Archbishop Joseph Marino, dated Feb. 11.

His decree will come into effect in the next academic year, 2020-2021, for the new trainees who join the academy in Sept. The academy is situated next to the Pantheon in the historic center of Rome, and today has 37 trainee diplomats (including 2 from the United States) from 20 countries in Africa, Asia, Europe, North and South America.

Addressing the American born archbishop as “brother,” Francis recalled that in his talk at the conclusion of the Pan-Amazonian synod on Oct. 26, 2019, he had expressed this very desire. On that occasion, he told the synod fathers that he was considering reforming the curriculum of formation for Holy See diplomats that currently requires young priests training for the diplomatic service to spend an internship of at least one year at a nunciature (Vatican embassy) in mission territory. Francis said he wanted future trainee diplomats to spend that time “at the service of a bishop in mission territory.”

Francis, who teaches that the whole church is called to be missionary, confirmed this reform in the letter which the Vatican released on Feb.17. He told Archbishop Marino, “I am convinced that such an experience can be useful for all young people preparing for, or beginning, the priestly service, but in a particular way for those who in the future will be called to collaborate with the pontifical representatives and, later on, in the their turn could be sent as envoys of the Holy See to nations and the particular churches.”

Francis said he wanted future trainee diplomats to spend that time “at the service of a bishop in mission territory.”

He recalled when he visited the academy on June 26, 2015, he told trainee diplomats that “the mission to which you will be called one day to carry out will take you to all parts of the world. Europe is in need of an awakening; Africa is thirsty for reconciliation; Latin America is hungry for nourishment and interiority; North America is intent on rediscovering the roots of an identity that is not defined by exclusion; Asia and Oceania are challenged by the capacity to ferment in diaspora and to dialogue with the vastness of ancestral cultures.”

Pope Francis said that “in order to face in a positive way these growing challenges for the church and for the world it is necessary that future Holy See diplomats acquire, in addition to solid priestly and pastoral formation, and the specific (formation) given to them by this academy, also a personal experience of mission outside of their home diocese of origin, by sharing with the missionary churches a period of journeying together in their communities, participating in their daily evangelizing activity.”

Pope Francis: A vibrant economy must put an end to poverty
Gerard O’Connell

Pope Francis tells Roman Curia: Do not fear change, it is in the nature of the missionary church
Gerard O’Connell

Well aware of all this, right from the beginning of his pontificate, Pope Francis has been concerned about the Holy See’s diplomats, who today number around 300, their formation and spiritual life, their welfare, their difficult and sometimes dangerous situations, their problems, and how they understand their role and mission. For these reasons, and as part of his reform of the Roman Curia, he established a new third section in the Secretariat of State that will be responsible for the personnel in the diplomatic service of the Holy See. He appointed the Polish Archbishop Jan Romeo Pawlowski to head that section.

Pope Francis asked Archbishop Marino to implement this new and challenging year in the missions for trainee diplomats in collaboration with Archbishop Pawlowski and with the Holy See’s nuncios around the world, who would be able to identify the mission diocese where they could go.

Francis is aware that this new reformed path of formation could give rise to concerns and anxieties among some of the trainee diplomats, but he said he feels “certain” that the missionary experience that they will gain will prove “useful” not only to these young trainees, but also to the local churches where they will collaborate. He expressed the hope too that their experience “will arouse in other priests of the universal church the desire to make themselves available to spend a period of missionary service outside their home dioceses.”

The Holy See has diplomatic relations with 183 states, as well as with the European Union and the Sovereign Military Order of Malta.

He has entrusted the task to introduce this reform to Archbishop Marino, who himself had experience of such missionary work when, as a seminarian for the diocese of Birmingham, Alabama, he worked for some months with Saint Mother Teresa in Calcutta in 1976, so he knows the challenges and the blessings it brings.

Pope Francis concluded his letter by entrusting to the Virgin Mary, Mother of the Church, “this new model of formation for future collaborators in the diplomatic mission of the Holy See.”