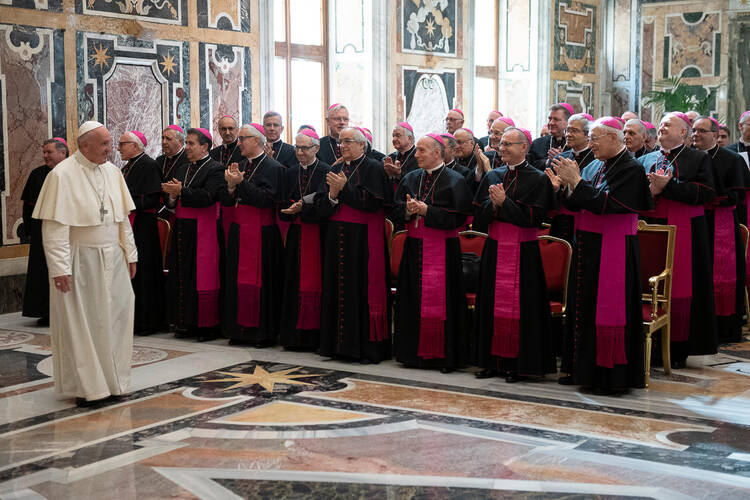 Pope Francis meets with nuncios from around the world at the Vatican in June. (CNS photo/Vatican Media)

Pope Francis has appointed Archbishop Joseph Marino of the United States as president of the Pontifical Ecclesiastical Academy in Rome, where the Holy See’s diplomats are trained before being sent on mission.

At the time of his appointment Archbishop Marino was apostolic nuncio to Malaysia and Timor-Leste, as well as apostolic delegate to Brunei Darussalam, posts he had been assigned to by Pope Benedict XVI in 2013. He succeeds Archbishop Giampiero Gloder, whom Francis has appointed as nuncio to Cuba. The Vatican announced the appointment on Oct. 11.

The Pontifical Ecclesiastical Academy was founded in 1701 under the pontificate of Clement XI as the Academy for Nobel Ecclesiastics. Since 1706, it has been located in Palazzo Severoli, in the Piazza della Minerva next to the Pantheon, in the center of Rome. Pius XI changed its name to the Pontifical Ecclesiastical Academy. It has a cardinal protector—the Vatican secretary of state, currently Cardinal Pietro Parolin. The academy currently has 37 priests from different continents in formation to be diplomats.

The dynamic and friendly Archbishop Marino, 66, is also a graduate of the academy (1988) but only the second American to be appointed its president; the first was Archbishop (later Cardinal) Justin Rigali. Archbishop Marino comes to his new post with considerable diplomatic experience in Africa, Asia, Europe and South America, including 11 years of service in three majority-Muslim states and seven years working in the Vatican’s Secretariat of State. Besides English, he is fluent in Italian and Spanish and knows French.

Born in Birmingham, Ala, in 1953, he earned degrees in philosophy and psychology from the University of Scranton in Pennsylvania and in theology and biblical theology from Gregorian University in Rome while residing at North American College (1975-80). After serving in a parish in Birmingham for four years (1980-84), he entered the Holy See’s academy for diplomats in Rome and gained a doctorate in canon law from Gregorian University.

Archbishop Marino comes to his new post with considerable diplomatic experience in Africa, Asia, Europe and South America, including 11 years of service in three majority-Muslim states and seven years working in the Vatican’s Secretariat of State.

At the Secretariat of State, he served as desk officer in the Section for Relations with States and was responsible for the Holy See’s diplomatic relations with Slovenia, Croatia, Serbia, Bosnia and Herzegovina, Montenegro, Albania and Moldova.

In April 1999, during the Kosovo war, he accompanied the secretary for Relations with States (the Vatican’s “foreign minister”) Archbishop Jean-Louis Tauran, to a meeting with Serbian President Slobodan Milosevic on a peace effort on behalf of Pope John Paul II.

In March 2003, on the eve of the Iraq war, he accompanied Cardinal Pio Laghi to Washington, D.C., to meet President George W. Bush on another peace mission on behalf of Pope John Paul II—a last-ditch effort to prevent that catastrophic war.

Pope Benedict appointed him as apostolic nuncio to Bangladesh, a majority-Muslim country, in 2008, and Cardinal Tauran, then president of the Pontifical Council for Inter-religious Dialogue, ordained him bishop in St. Paul’s Cathedral, Birmingham, also in 2008.

Five years later, in 2013, Pope Benedict appointed him as the first apostolic nuncio to Malaysia, another country with a majority-Muslim population. There he oversaw the building of a new nunciature, the Holy See’s first totally environmentally friendly one.

As apostolic nuncio to Timor-Leste, where the overwhelming majority of its 1.5 million people are Catholic, he was responsible for negotiating the international accord between Timor-Leste and the Holy See, which was signed in Dili by Cardinal Parolin in 2015. In recent times, aware of the many vocations to the priesthood in this country, he has overseen the building of a new seminary, a work that is still underway.

Most recently, he brought a message from Pope Francis to the Sultan of Johor, IbrahimIbni Almarhum Sultan Iskandar, thanking him for commuting the death sentence of three Mexican brothers for drug trafficking crimes. Archbishop Marino had earlier conveyed the pontiff’s request for clemency to the sultan.