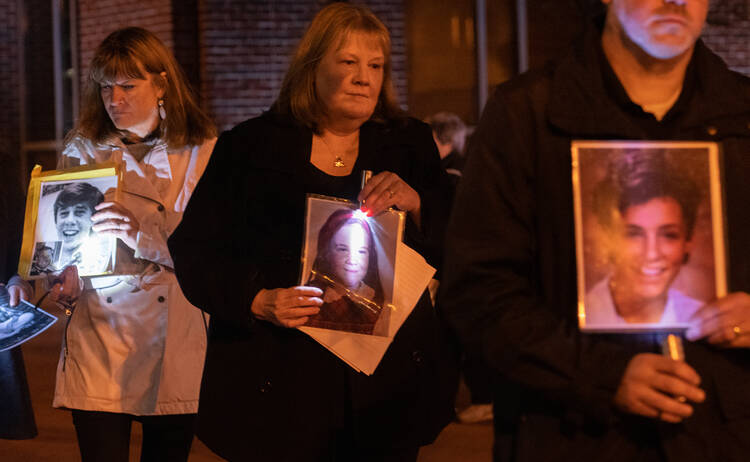 Supporters of the Survivors Network of those Abused by Priests (SNAP) outside the assembly of the United States Conference of Catholic Bishops in Baltimore on Nov. 12, 2018. (CNS photo/Kevin J. Parks, Catholic Review)

Transparency can be hard to look at.

On Jan. 28, the nonprofit news organization ProPublica published a report headlined “Catholic Leaders Promised Transparency about Child Abuse. They Haven’t Delivered.” This report contains the names of the 5,800 priests and deacons who have been publicly identified by the bishops or superiors of 174 dioceses and religious orders as having had credible allegations of sexual abuse of a minor made against them in recent decades. In other words, ProPublica has created the only “List of Lists” of Catholic clergy abusers in the United States.

The names of many of the men on this list were previously known through the decades-long, dedicated work of bishopaccountability.org or discoverable in various open-source websites and blogs. But ProPublica has developed a new, comprehensive, interactive database whereby anyone can identify a “credibly accused” priest, deacon or brother who has been previously reported by his diocese or religious order, simply by searching his name. A handy “sounds like” function is included to assist in looking for someone whose exact name is unknown. The site also allows one to search by the name of a parish, diocese or religious order, and it provides a spreadsheet of any known data about an individual’s year of birth, ordination, status and assignment.

ProPublica has created the only “List of Lists” of Catholic clergy abusers in the United States.

While no list of alleged and known offenders will ever be perfect, ProPublica’s work provides abuse survivors with an important tool to help in their healing process. Seeing the name of one’s offender on such a list provides confidence to someone who has been afraid to come forward because they assumed that no one would believe their allegation. For some who have already reported their abuse, seeing the name of their offender on such a list can be affirming and bring a sense of peace. For others, these lists represent a small amount of justice and a type of accountability for their offenders.

The ProPublica list also provides a service in terms of public safety. Although its report indicates that over half of the men on its list are deceased, there are large numbers of living offenders who could represent a risk of future abuse. The list does not constitute a government-run sex-offender registry, but it does raise important questions about the men, such as their location, access to minors or vulnerable adults, and whether or not they can be realistically and properly supervised.

Seeing the name of one’s offender on such a list provides confidence to someone who has been afraid to come forward because they assumed that no one would believe their allegation.

There are several reasons why dioceses and religious orders have been painfully slow in disclosing the names of abusers—reasons that primarily reflect concerns for the offender or the church rather than for abuse survivors or the faithful. In the past, a voluntary release of names was often criticized as a violation of the privacy of the offender, or as being fundamentally unjust to a man who was accused of abuse after he died. In some places, church attorneys warned that the release of names would give rise to an increased number of “false claims.”

The importance of the ProPublica list to survivors, the faith community and the public cannot be overstated.

Court orders to release the names of the accused, as well as settlement agreements that included policies to prevent further abuse, changed the landscape over time, but they did little to promote a national effort to be transparent. But in 2018, the Pennsylvania grand jury report, the increased interest in sexual abuse in the Catholic Church by law enforcement, and the revelations about the abuses committed by some popular and well-regarded church leaders caused many lay Catholics to urge bishops and superiors to disclose the names of credibly accused offenders. It became clear that retaining the trust of the faithful required true transparency, and transparency meant disclosing the names of abusers.

Will other disclosures now be made? Currently, there are several dioceses and religious orders that have announced their intent to publish or update a list of names after internal and/or external examinations of their records. But in some cases, dioceses and religious communities may lack the personnel or financial resources necessary to compile a comprehensive list of men with credible allegations. Others may be challenged by their antiquated, paper-based recordkeeping systems or a lack of archival expertise.

In 2015, I wrote in America that the debate about disclosing the names of clergy abusers had already persisted, shamefully, for over a decade. All of the 17,000 or more wounded boys, girls and young adults deserve to have their perpetrators named. But it is fair to say that this debate is coming to an end, and we can expect more disclosures and lists in the near future. Full transparency might even expand to include the names of all persons, clergy or lay, who have abused a minor or vulnerable adult while performing any type of Catholic ministry.

Transparency may be hard, but it is worth it.

Kathleen McChesney is a former executive director of the U.S.C.C.B.’s Office of Child and Youth Protection and a former F.B.I. executive. Dr. McChesney is President of Kinsale Management Consulting, a firm that works with dioceses and religious communities regarding clergy misconduct and high-risk behaviors.