Disclose the Names of Clergy Abusers: It’s time to end the debate 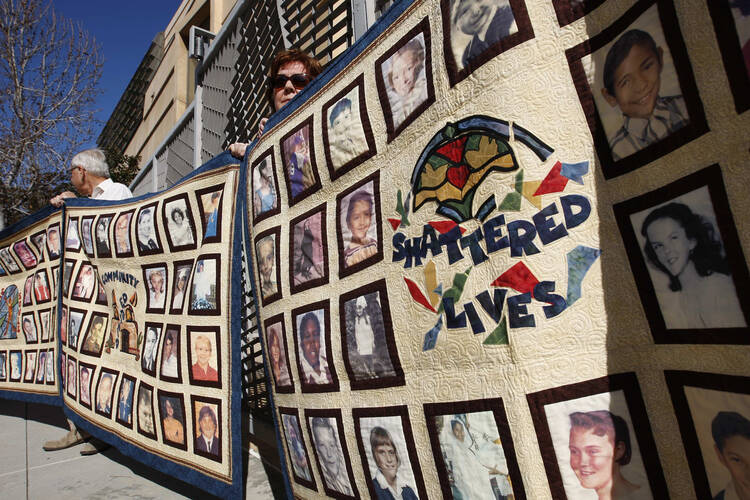 A survivor of sexual abuse perpetrated by a Catholic priest hesitates to report his abuse, thinking that he will not be believed. Another survivor knows that she was not the cleric’s only victim but worries that she will be the only person to report his behavior. And many Catholics complain that their church has allowed the media and survivors’ organizations to control, and even manipulate, information in order to make all clergy seem suspect and all bishops seem insensitive.

Would full disclosure of the names of clergy offenders help these survivors and the countless other men and women who have still not reported their abuse to come forward? Would such disclosures provide comfort to those survivors who were not believed by church officials when they reported these incidents years ago?

For the past decade, arguments have been made for and against mandated disclosures, and there have been disclosures made and disclosures withheld. Nonetheless, the debate continues.

The Case for Disclosure

Thirty-four dioceses and six religious institutes in the United States have already published full or partial lists of clerics credibly accused of the sexual abuse of minors. While some of these disclosures were made voluntarily, others occurred only upon a court order or as the result of a nonmonetary settlement agreement with a survivor.

Proponents argue that full disclosure is necessary to prove that the offenders, as well as the leaders of the Catholic Church, are truly accountable for their actions. They also often characterize the bishops’ pledge to be open and transparent about the issues of clergy sexual abuse—a key component of the bishops’ Charter for the Protection of Children and Young People—as an unkept promise to the faithful and part of an ongoing concealment of misconduct and mismanagement.

Through disclosure survivors learn that they are not the only person that their perpetrator has abused, thereby giving them the additional courage and confidence they may need to come forward.

More important, however, is that through disclosure survivors learn that they are not the only person that their perpetrator has abused, thereby giving them the additional courage and confidence they may need to come forward. For those who do report their abuse, seeing their offender’s name on a public list affirms their decision to reveal what occurred and reinforces the fact that they were believed by church leaders. And, for many, recounting the details of what occurred can be a significant first step in the process of reconciliation and healing.

Disclosing the names of abusers can serve as a deterrent, a preventative measure. The possibility of being named publicly as an abuser sometimes deters individuals from acting on their impulses to abuse, to violate boundaries or even to seek out child pornography. As has been shown by the impact of sex-offender registries, making the existence of a child abuser known to the public is helpful to parents and caregivers in determining if a particular person may pose a threat to a child.

Regardless of the impetus for disclosing the names of clergy abusers, church leaders have been able to use the lists to provide important information to the public in an accurate, timely and unfiltered manner. Dioceses and religious institutes, such as the Archdiocese of Detroit and the Capuchin Franciscan Province of St. Joseph, have also issued statements that provide the appropriate context of the allegations and explain the actions taken in response to them. Where the media or other entities are the default or only publishers of offender lists, the proactive and protective work done by the church is often ignored.

Thoughtful opponents of disclosing the names of abusers express concern that survivors who see the name of their abuser on a public list could experience additional emotional or psychological harm. However, there is no evidence to support that notion. More often, opponents simply believe that disclosure is a flawed idea that will unquestionably be the catalyst for false reports and spurious litigation.

Other important arguments against disclosure include the need to restore a cleric’s good name if it is later determined that he did not offend or was mistaken for another man who actually committed the act. In addition, if the alleged abuser is deceased, as many are, the case might be made that because he is unable to refute the allegation his name should not be disclosed—notwithstanding the strength of testimony that may exist against him.

For many, recounting the details of what occurred can be a significant first step in the process of reconciliation and healing.

While many names of clergy offenders are already included in public forums, for example on the internet, survivor websites, sex-offender registries and in court documents and press releases, there are no requirements or guidelines for dioceses and religious institutes regarding disclosing names. Without requirements or guidelines, the decision to disclose and the subsequent process can be a challenging, time consuming and even costly process for bishops and religious superiors.

These concerns existed—especially that of restoring the good name of a cleric who has been wrongly or falsely accused—long before the onslaught of allegations of abuse cases that began in 2002 and the first disclosures were made. It is not surprising that there have been sex-abuse allegations against Catholic clergy that are untrue, given that people have borne false witness against one another for centuries. Annual reports indicate that many of the accused men are deceased at the time an allegation is made against them, but experienced investigators can often find witnesses and evidence to support or refute these claims.

All of these men and women were children or teenagers at the time of their abuse by a trusted member of the clergy. The tragic assaults they endured devastated their young lives, tore their psyches and spirits and forever changed their relationship with the church.

There are no data available on whether or not a survivor of sexual abuse suffers additional psychological harm if they see their perpetrator’s name on a list. However, there is strong anecdotal support for the emotional benefits to survivors of publishing such lists.

Developing and Implementing a Disclosure Plan

The inherent difficulties in disclosing the names of clergy offenders can be overcome by emulating some of the effective procedures that have been used by other dioceses and religious institutes. For instance, once a bishop or religious superior approves the disclosure of names, he should involve pertinent staff, consultors and/or his respective review board. He should also:

The newly established Pontifical Commission on the Protection of Children plans to establish a process that will ensure that bishops and other church leaders are held publicly accountable for their actions (or inactions) with regard to clergy and lay religious who sexually abuse minors. Requiring all dioceses and religious institutes to disclose the names of known abusers could be an effective component of that process. Furthermore, revealing the names of these men will reinforce the reality that the church acknowledges the dignity, sacredness and human value of abuse survivors.

What can I say to my kids when they ask why we keep faith in this church?
Kerry Weber

It is known that at least 17,000 men and women have reported abuse by Catholic priests and deacons since 1950 from the data gathered by the The Nature and Scope Study of Sexual Abuse of Minors conducted by the John Jay College of Criminal Justice in 2004 and the annual reporting of allegations of abuse by dioceses and religious institutes to Georgetown University’s Center for Applied Research in the Apostolate (CARA).

All of these men and women were children or teenagers at the time of their abuse by a trusted member of the clergy. The tragic assaults they endured devastated their young lives, tore their psyches and spirits and forever changed their relationship with the church.

The crucial debate about disclosing the names of clergy abusers has shamefully persisted for over a decade and needs to end. All of the wounded boys and girls deserve to have their perpetrator named.

Kathleen McChesney is a former executive director of the USCCB’s Office of Child and Youth Protection and former FBI executive. Dr. McChesney is President of Kinsale Management Consulting, a firm that works with dioceses and religious communities regarding clergy misconduct and high-risk behaviors.