Pope’s exhortation following Amazon synod to be published next week

Pope’s exhortation following Amazon synod to be published next week 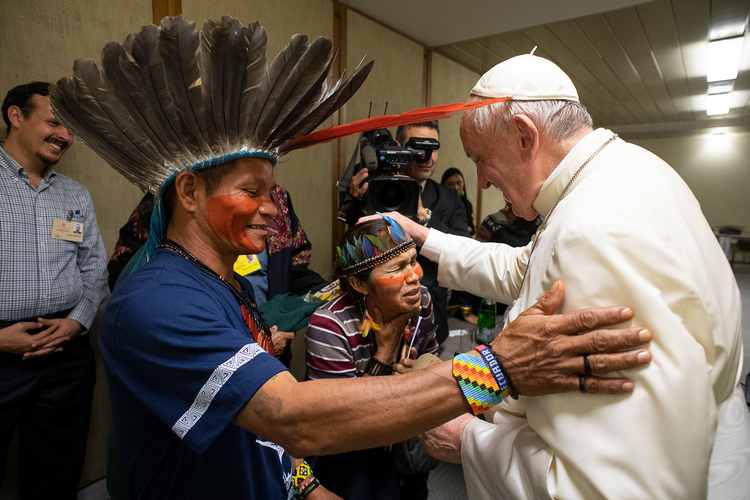 Pope Francis meets indigenous people from the Amazonian region during the second week of the Synod of Bishops for the Amazon at the Vatican Oct. 17, 2019. (CNS photo/Vatican Media)

Pope Francis’ much-awaited exhortation on the Pan-Amazonian synod will be released on Feb. 12, the Vatican announced today. It bears the title “Querida Amazonia” (“Beloved Amazonia”) and will be sent to journalists at 8 a.m. in the morning with an embargo until midday (Rome time). It will be available in different languages including English.

America has learned that Pope Francis finished writing the text on Dec. 27, and—as is the normal praxis—the text was then submitted to the Congregation for the Doctrine of the Faith and the papal theologian for their opinion. No substantial changes were made to the text, and it was subsequently sent for translation, which is a long process.

Podcast: Debunking ‘fake news’ about married priests in the Amazon
Inside the Vatican

A press conference will be held on Feb. 12 at 1 p.m. in Rome, 7 a.m. EST, which will be live-streamed. Participants at the press conference will include two cardinals: Lorenzo Baldisseri, general secretary of the Synod of Bishops; and Michael Czerny, special secretary of that synod. Others on the panel will be the Rev. Adelson Araújo dos Santos, S.J., theologian and professor of spirituality at the Gregorian University, Rome; and Augusta de Oliveira, S.M.R., a Brazilian sister and vicar general of the Serve di Maria Riparatrici.

The 2007 Nobel Prize winner Carlos Nobre will also be present. The Most Rev. David Martínez de Aguirre Guinea, O.P., from Puerto Maldonado, Peru, who served as special secretary of the synod with Cardinal Czerny, will participate by video-link-up.

Show Comments ()
Comments are automatically closed two weeks after an article's initial publication. See our comments policy for more.
Provide feedback on this article
Join the conversation: Login or create an account
Before you can comment, you need to update your profile to include your first and last name, as required in our comments policy. Then reload this page and you'll be set up for commenting. Update your profile
More: Vatican / Synod on the Amazon