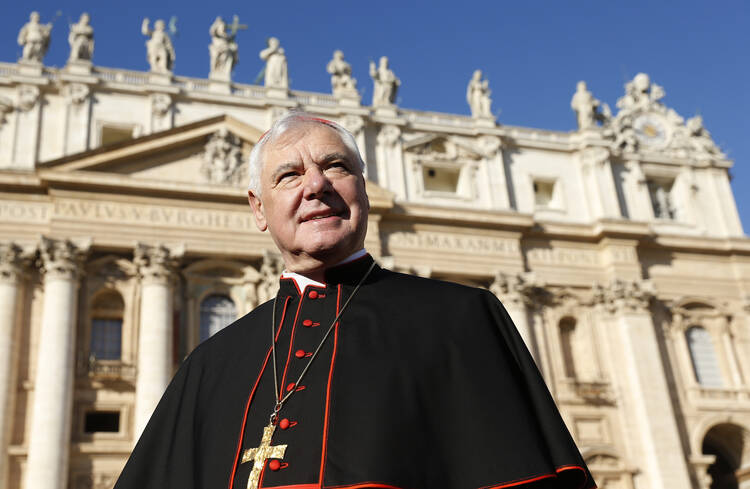 Bonn (KNA)—Criticism of remarks by Cardinal Gerhard Ludwig Mueller comparing the church reform dialogue under way with events in Nazi Germany continued on Wednesday, with Wuerzburg Bishop Franz Jung saying the comments were “very out of place.” He pointed out that the Synodal Path was based on resolutions of the German Bishops’ Conference: “So then you must also stand by them.”

Meanwhile the highest Catholic laypeople’s group in Germany, the Central Committee of German Catholics (ZdK), also criticized the comments by Cardinal Mueller, the former prefect of the Congregation for the Doctrine of the Faith in the Vatican.

ZdK president Thomas Sternberg told Germany’s Catholic News Agency (KNA): “There is criticism that disqualifies itself. It is so removed from everyday life that it cannot be taken seriously.” With his remarks, Mueller stood “against the major agreement of the Catholic faithful and the great majority of the episcopalian brothers,” Sternberg said.

Mueller had drawn parallels between last weekend’s Synodal Path decision-making processes in Frankfurt with the so-called Enabling Act of the German Reichstag parliament of 1933. “In a suicidal process, the majority decided that their decisions are valid even if they contradict Catholic doctrine,” Mueller told the Canadian portal LifeSiteNews.

“This is like the situation when the Weimar Constitution was repealed by the Enabling Act. A self-appointed assembly, which is not authorized by God nor by the people it is supposed to represent, rescinds the Constitution of the Church of Divine Right, which is based on the Word of God (in Scripture and Tradition),” added the cardinal, who confirmed his LifeSiteNews comments to KNA.

His political reference was to the Enabling Act of March 24, 1933 when the duly-elected Reichstag gave sweeping powers to the government of Adolf Hitler, allowing it to enact laws without the approval of the Reichstag.

Jesuit priest Bernd Hagenkord sharply criticized Mueller’s comparison as being poisonous and destructive. “This is not the church,” said Hagenkord, one of the spiritual advisors of the church reform process in Germany and formerly long-time head of the German-language section of Vatican Radio.

KNA International
Provide feedback on this article
Join the conversation: Login or create an account
Before you can comment, you need to update your profile to include your first and last name, as required in our comments policy. Then reload this page and you'll be set up for commenting. Update your profile
Show Comments ()
Comments are automatically closed two weeks after an article's initial publication. See our comments policy for more.