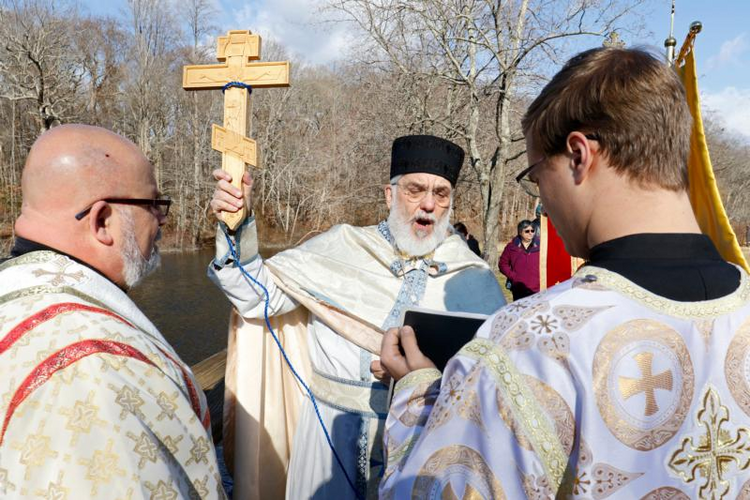 Father Tyler Strand of Resurrection Byzantine Catholic Church in Smithtown, N.Y., holds a crucifix as he blesses the waters of the Nissequogue River in Smithtown during a prayer service Jan. 6, 2019, marking the feast of the Theophany. The feast, celebrated by Eastern churches, commemorates the revelation of the Holy Trinity through Christ's baptism in the Jordan River. (CNS photo/Gregory A. Shemitz)

And, as far as substance goes, the book paid scant attention to the uninterrupted presence of married priests in all but two of the Eastern Catholic churches.

Published in French in mid-January, the 148-page book -- "From the Depths of Our Hearts" -- will be released in English by Ignatius Press in late February. The publisher provided an advance copy to Catholic News Service.

The French release coincided with expectations that Pope Francis soon would publish his reflections on the Synod of Bishops for the Amazon, which included highly publicized discussions of the possibility of ordaining some married men to the priesthood for service in communities where the celebration of Mass is infrequent.

The original French publication listed the authors of the book as "Benedict XVI and Cardinal Robert Sarah," the Guinean prefect of the Congregation for Divine Worship and the Sacraments.

Coming shortly after the release of a video showing the 92-year-old retired Pope Benedict in a wheelchair and struggling to speak, people questioned whether the retired pope had the energy and ability to co-author a book. And many others questioned the appropriateness of a retired pope doing so, particularly when the timing could appear as an attempt to influence or even preempt Pope Francis.

Archbishop Georg Ganswein, Pope Benedict's personal secretary, issued a statement Jan. 14 saying, "At the indication of the pope emeritus, I asked Cardinal Robert Sarah to contact the publishers of the book, requesting them to remove the name of Benedict XVI as co-author of the book itself, and also to remove his name from the introduction and conclusions."

Cardinal Sarah agreed to do so and, late Jan. 17, tweeted that he had just met with the retired pope and "there is no misunderstanding between us."

Reaction to the book, however, did not focus only on the authorship and timing. Its substance gave new energy to a debate that has been going on for decades and will continue because, as the Second Vatican Council said, the general requirement of celibacy for priests in the Latin-rite portion of the church is "not demanded by the very nature of the priesthood."

The Catholic Church can say that, the council said, because there were married priests in the early church and there still are in the Eastern Catholic churches, not to mention the exception made for married ministers of other Christian churches who become Catholic.

The new book's introduction, drafted by Cardinal Sarah and, according to him, approved by the retired pope, said the publication was not an attempt to end the discussion. "To us it appeared useful and necessary to publish this work at a time when minds seem to have calmed down" after the Amazon synod, the introduction said.

"Everyone can complete it or critique it," the text continued. "The search for truth can be made only by opening the heart. Therefore, we fraternally offer these reflections to the people of God and, of course, in a spirit of filial obedience, to Pope Francis."

The retired pope's chapter in the book offers a brief history of how the Latin-rite church came to require celibacy of most of its priests and a theology of the priesthood that includes seeing the sacrifice of Christ, "the high priest," as the fulfilment of the worship and sacrifice of the Hebrew priests of the Old Testament. In imitation of Christ, "the cultic act proceeds by way of an offering of the totality of one's life in love," he wrote.

"The priesthood of Jesus Christ causes us to enter into a life that consists of becoming one with him and renouncing all that belongs only to us," Pope Benedict wrote. "For priests, this is the foundation of the necessity of celibacy, but also of liturgical prayer, meditation on the Word of God, and the renunciation of material goods."

The retired pope also saw a connection between the priests of ancient Israel being "strictly obliged to observe sexual abstinence during the times when they led worship and were therefore in contact with the divine mystery," and similar requirements being made for priests in the early church.

Once the regular and daily celebration of the Eucharist became common, priestly celibacy was a natural result, he said.

"From now on, their entire life is in contact with the divine mystery," he wrote. "This requires on their part exclusivity with regard to God. Consequently, this excludes other ties that, like marriage, involve one's whole life."

The retired pope's premise seemed to call into question the value of both the priesthood and the marriage of married priests who minister in the name of and with the blessing of the Catholic Church, whether they are in an Eastern Catholic church or are former Protestant or Anglican ministers.

In his 38-page essay in the book, retired Pope Benedict did not mention specifically the practice of ordaining married men to the priesthood in the Christian East. But Cardinal Sarah did, and he pointed to problems with the practice -- including divorce -- in the Orthodox churches.

And he posited that the Catholic Church has allowed the Eastern churches in communion with it to maintain optional celibacy for priests "to foster a gradual development toward the practice of celibacy, which would take place, not by a disciplinarian path, but rather for properly spiritual and pastoral reasons."

Ukrainian Catholic Bishop Kenneth Nowakowski, who will be installed as the bishop of the Eparchy of the Holy Family in London in April, told Catholic News Service, "Growing up in Canada, my own parish priest was a married man with two children. I know how dedicated he was to the parish and to his priestly ministry."

In the Christian East, "celibacy is highly esteemed," but so is the tradition of married clergy, he said.

"The Vatican's respect for the traditions, spirituality and practices of the Eastern churches is not a concession or an instrument for anything," Bishop Nowakowski said. Rather, "it is allowing the universal church to breathe with both lungs -- East and West -- as St. John Paul II often said."

The bishops of the Ukrainian Catholic Church in 2009 solemnly proclaimed Blessed Omelian Kovch to be "patron of priests" of their Eastern Catholic church. Blessed Kovch, a married priest and father of six, was martyred in the Nazi's Majdanek concentration camp in 1944 for assisting Jews. He was the son of an Eastern Catholic priest, the father of two priests and the grandfather of a priest.

Show Comments ()
Comments are automatically closed two weeks after an article's initial publication. See our comments policy for more.
Provide feedback on this article
Join the conversation: Login or create an account
Before you can comment, you need to update your profile to include your first and last name, as required in our comments policy. Then reload this page and you'll be set up for commenting. Update your profile
Advertisement
More: Pope Benedict XVI