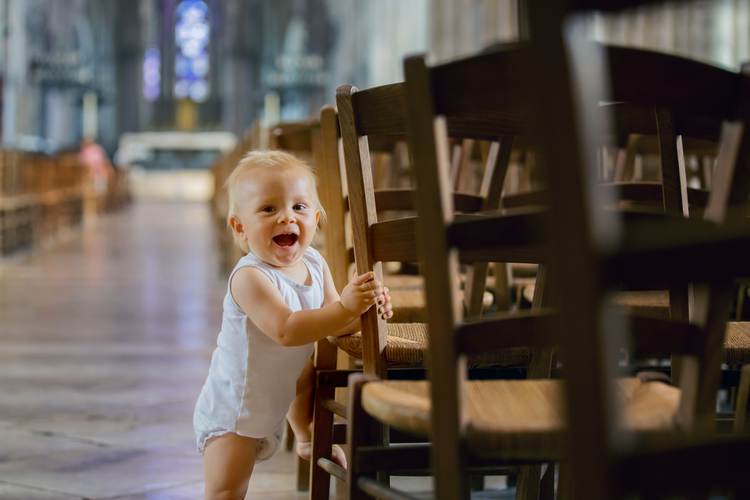 It was, objectively, a gorgeous Christmas Eve Mass. The choir was well-rehearsed and sang with gusto. The space was beautifully decorated; the homily was carefully crafted and delivered with enthusiasm. A variety of ages and stages of life were represented in the packed pews.

At least, I assume. I could not actually see or hear any of this, despite being in church.

I, along with my spouse and parents-in-law and our 15-month-old toddler, were crammed in the gathering space with probably about 50 or so others. Many were elderly people who needed the few soft chairs, but most were like us—young families with wiggly kiddos who scurried around, occasionally trying to steal pamphlets off the information table or stick their heads in the trash cans.

We had shown up 15 minutes before Mass began. We knew that would mean we’d be standing, but the idea of going any earlier and trying to keep Sir Grabby contained in a crowded pew did not seem any more palatable, so it was the gathering space for us. As Mass began, the beautifully ornate glass doors to the church proper were closed and the few strains of singing we had been able to hear faded behind them. My spouse and I looked at each other, wondering what, exactly, a Mass behind the doors was going to be like.

We are not sure how to be both the involved people that we used to be and the dedicated parents we need to be.

Our year has been like that, mostly. Our last church community was welcoming of us and our baby, but we moved to a new city before the little one got mobile. The challenges of attending church with a curious toddler are well known enough to be cliché, but like any set of new parents, they are new to us. More to the point, we were leaders in our last church. My husband had directed music and liturgy there for eight years, and I am a theologian and a former parish professional. We relished our roles at the heart of things, discussing homilies and the skills of various lectors and cantors, tidying up the sanctuary after every service we attended.

Since we moved, we have wanted to find a new parish home, but just haven’t. We are not sure how to be both the involved people that we used to be and the dedicated parents we need to be. Some parishes we have visited have tried to grab us with both hands, offering us a hundred opportunities to volunteer that we cannot find time for, and we pull back, knowing we have already disappointed them. Others ignore us entirely, aside from an occasional kindly comment about our cute baby, and we wonder if they have it in their heart to open space for newcomers.

As our son has gotten squirmier, we have started to look for cry rooms, but cannot bring ourselves to set up shop there either. We want to sing loudly and respond with our “Amens” and do our Catholic aerobics, and cry rooms do not seem set up for that sort of participation. At least, we don’t think they are. We have not gone into any of them. Walking through those doors feels like a defeat in and of itself, an admission that as parents of a young child, we can never again expect to “get anything” out of Mass in the way we used to. It is less defeating to just not walk through the front doors of a church, and we have chosen that option more than I care to admit.

The challenges of attending church with a curious toddler are well known enough to be cliché, but like any set of new parents, they are new to us.

So, to be fair, I came to this Christmas Eve Mass with more than enough of my own turmoil, and watching those doors close and realizing we could only hear one out of every 10 words through the aged speaker system felt like another blow on a night where all I wanted was to hear my husband’s resonant tenor singing the harmony to “Silent Night.” Thankfully, I was surrounded by people wiser than I who all wanted to stay.

In the moments where I was not tailing my toddler’s speedy steps, I was seeing people that I have never gotten to see at Mass before. There was a family with four—four—small children, the youngest no more than a couple months old. The baby had a bad cough, and I marveled as the parents corralled their older three with coloring books while preparing medicine and a bottle for the tiny one. They stood the entire time. The mom never put the baby down. I could feel my own back ache in sympathy at the strain.

I watched another couple with two toddlers of their own, both dressed in their stiff and adorable Christmas best, who skittered around like mice. Those parents tapped out around the Gospel reading. (I think; it could have been the homily. Again, I couldn’t hear much.) I wish I could have smiled at them, somehow registered that I thought it was wonderful that they had come, even if just for that little while, that they had tried so hard when they probably did not have much more energy to give.

I am used to being at the center of all things church; life and circumstances have shifted me to the margins for a little while.

I watched a small group of elderly parishioners, all using canes and walkers to get around, who clearly sat out here most weekends. They smiled at the children as they roamed, demonstrating a patience I would never have expected from “regulars” whose comfortable space had been so thoroughly taken over by strangers. I wondered if they could hear the priest’s homily at their usual Masses, sitting out here. I doubted it.

It took me until nearly the Eucharist (which, thankfully, we did get to enter the church space to receive) to get it. I am used to being at the center of all things church; life and circumstances have shifted me to the margins for a little while. It is not a marginalization akin to that experienced by our L.G.B.T. Catholics, by folks with disabilities, not even as profound as that experienced by families with toddlers more spirited than my own. But it is a chance for me to see our church through a new set of eyes.

Can owning a dog make you a better Catholic? Mine did.
Emily Kahm

Our drive home was filled with discussion of how a church might be more welcoming to the kinds of people we spent our Christmas Eve with, ranging from better sound systems, live-broadcast screens, mini-choirs for the narthex, more accommodating seating, even reserving entire pews up front for the squirmy families. None of our ideas were revolutionary, and most were not even all that original, but it felt good to care again, more like we had when church had felt like “ours.” Even more, we were energized; the rush we were used to getting from great liturgical music choices was coming instead from wondering what that family with the sick baby would have liked. (I am sure a chair with armrests would have gone a long way.)

One Christmas Eve has not solved all of our issues. We are still recently uprooted toddler-havers with bafflingly strong opinions on which eucharistic prayer the priest uses. But it has made space for us to wonder about church differently and to think about how to use the limited power, knowledge and time we have to make life a little easier for everybody else who is just doing the best they can with the hand they have been dealt. It is enough to make me want to try going to Mass again while spending the next few years in Toddler Purgatory, even if it is in a cry room. Just because those lovely glass doors were closed to us does not mean we cannot open another set for ourselves.

Show Comments ()
Comments are automatically closed two weeks after an article's initial publication. See our comments policy for more.
Show Comments ()
Join the conversation: Login or create an account
Before you can comment, you need to update your profile to include your first and last name, as required in our comments policy. Then reload this page and you'll be set up for commenting. Update your profile
Advertisement
More: Liturgy / Family Life 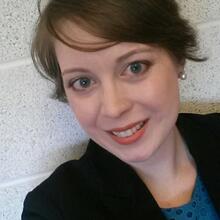 Emily Kahm is an assistant professor of theology at the College of St. Mary in Omaha, Neb. She lives with her spouse, Chris, and son, Xavier.