Confessions of a Catholic Bartender 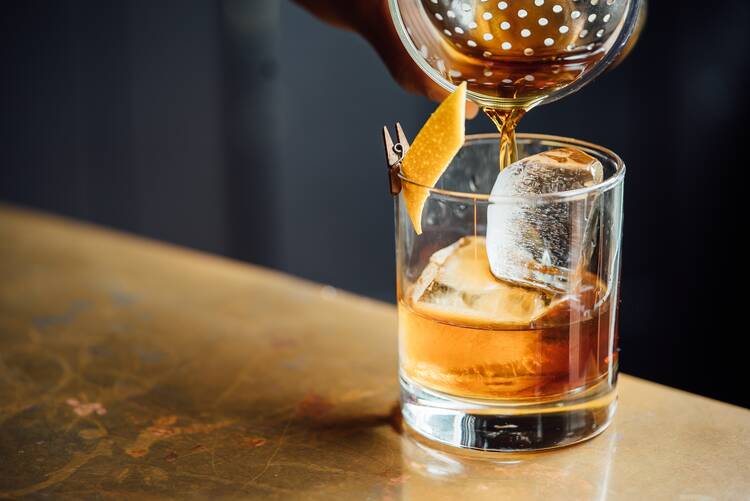 Photo by Adam Jaime on Unsplash

I still remember the first cocktail I ever made. It was for my best friend on his 21st birthday and was borrowed from a billowing volume of “martini” recipes that included a selection of colorful, fruity concoctions. Thumbing through the book, I decided on the Alien Secretion since the recipe called for equal parts. At that age, I did not know what a part was, but I knew how to pour three equal amounts into a pitcher and so I did: spiced rum, canned pineapple juice and melon liqueur. To that, I added ice, and the cocktail was complete. It was bright green and tasted like candy.

The Alien Secretion is not a martini or even a cocktail in the strictest sense. The cocktail’s first definition came in 1806 in The Balance, and Columbian Repository, a newspaper published in Hudson, N.Y.: “Cocktail is a stimulating liquor, composed of spirits of any kind, sugar, water, and bitters.” Though it had three of the four requirements—including a lot of sugar—my concoction was sans bitters, ergo not technically a cocktail.

After bouncing around from job to job in my 20s and landing at a small neighborhood bar, I decided to take my newfound skill seriously and began studying the history and craft of the cocktail. I found refuge in a book by William Grimes called Straight Up or On the Rocks: The Story of the American Cocktail and an emergent internet community of cocktail nerds who debated the finer points of obscure drinks I had never heard about, even if now they are commonplace.

I eventually opened my own bar in Washington, D.C., the Columbia Room, which was named Best American Cocktail Bar at the Tales of the Cocktail Foundation’s Spirited Awards in 2017. I am also the chief spirits advisor for the National Archives Foundation, which I joke makes me the highest-ranking bartender in the U.S. government. And in April, I published a book on the history of the cocktail—from which the Alien Secretion is conspicuously absent.

Some doubt that a spiritual discussion of any depth can take place across the mahogany. Does faith belong on a barstool? It turns out the answer is yes.

What is not absent from my book, or rather propitiously present, is a recipe for the gin martini, the first drink I poured for Bill Dailey, C.S.C. He is a priest who was working in Washington as a lawyer and became a fan of classic cocktails. We met at the historic Tabard Inn. I was a lapsed Catholic, and our casual discussions of God, religion and cocktails grew into something less casual. For me, that meant reading Pope Benedict’s Introduction to Christianity; for him, it meant learning to add orange bitters to his martini. Eventually, I asked him to help me to be confirmed in the church.

Some find it odd to see a man of the cloth drinking at a bar or doubt that a spiritual discussion of any depth can take place across the mahogany. Does faith belong on a barstool? It turns out the answer is yes, and not only as a lure for the lapsed. There are many instances in which drinking is mentioned and condoned in the Bible. Jesus is accused of drunkenness (Mt 11:19), and, for his first miracle at the wedding at Cana, he turns water into wine (Jn 2:1-11). Beyond that, the Psalmist praises creation and “wine to gladden men’s hearts” (104). In Ecclesiastes, we are instructed to “Go eat bread with joy and drink your wine with a merry heart” (9:7).

As Father Dailey and I studied together, we found many similarities between our professions, and none was more obvious than the virtue of hospitality. Father Dailey would later write about hospitality, in an essay titled “Cocktail Theology,” as the most important spiritual aspect of cocktail culture. He described tending bar as “the work of helping people to feel a bit less estranged, a bit more comfortable in their own skin in the Milky Way.” Both bartenders and priests help ease people through the profound anxiety sometimes provoked by our very existence in a hectic and materialistic world.

Just like a priest, a bartender serves a congregation and, at their best, bartenders can create community.

Just like a priest, a bartender serves a congregation and, at their best, bartenders can create community. They welcome each guest into the bar and provide food, drink and conversation. They become a guide to the city or connector to other people within the bar. There have been more than a few times at my bar when strangers have become friends, seeing each other off at the end of the night as if they have known each other for years.

Of course, there is a dark side to drinking. Just as the priest must contend with sin, bartenders often see firsthand the ravages of alcohol abuse. The drinks themselves are not to blame. As St. Thomas Aquinas reminds us, “No meat or drink, considered in itself, is unlawful, according to Matthew 15:11, ‘Not that which goeth into the mouth defileth a man.’” It is our need for drinking that becomes our downfall. We can find the distinction in a passage from Heretics, by G. K. Chesterton, who wrote, “Never drink when you are wretched without it, or you will be like the grey-faced gin-drinker in the slum; but drink when you would be happy without it, and you will be like the laughing peasant of Italy. Never drink because you need it, for this is rational drinking, and the way to death and hell.”

The point is well taken. Whether through the disease of alcoholism or other factors that lead us to become dependent on alcohol, it is our need that makes us ignore better sense and draws us inward, painting ourselves into a dark corner ruled by viciousness and selfish desires. I have seen it again and again with customers, co-workers and even myself. Drinking can become a way to overcome feelings of anxiety, sorrow or depression. It is a medicine of sorts—something that mimics love and acceptance but only for the time you remain under its influence. In Proverbs, alcohol is said to sparkle in the cup but bite like a snake (23:31-32).

The drink is a prop; what the person feels while they drink it is what they will take away from the bar.

When we drink for the right reasons, it can add to our lives. That is irrational drinking, as Chesterton calls it. Chesterton means that we do not need it, that it is a multiplier, something that increases our sense of well-being and connectedness. The cocktail enthusiast David Embury wrote in his seminal book The Fine Art of Mixing Drinks a convincing sentiment about the power of drinks to enhance our lives: “The well-made cocktail is one of the most gracious of drinks. It pleases the senses. The shared delight of those who partake in common of this refreshing nectar breaks the ice of formal reserve. Taut nerves relax; taut muscles relax; tired eyes brighten; tongues loosen; friendships deepen; the whole world becomes a better place in which to live.”

How the Jesuits of ‘America’ heroically defended booze against Prohibition
James T. Keane

When prohibition ended, the Jesuits were as relieved as anyone else
The Editors

A “well-made cocktail” is the last thing I would call the Alien Secretion I made for my best friend. Back then I did not have a cocktail spoon or mixing glass. Instead, I used a plastic ice tea pitcher. I tossed in ice from the fridge, infused with the aromas of all freezer items that had preceded it there, and began to swish the pitcher around using my elbow as a rudder, creating a tiny vortex at the top of the liquid. I then poured the “cocktail” into plastic cups and we drank it.

Despite my ineptitude in mixing the drink, I had learned something vitally important about drinking, something echoed in my relationship with Father Bill: The drink is not what makes a bartender or a good bar. I was something less than a bartender when I made my very first, even as it presaged my vocation. The drink is a prop; what the person feels while they drink it is what they will take away from the bar.

What matters most is that we make time to connect with each other, that we create a space for important discussions, which sometimes begin with the trivial. That we allow ourselves the indulgence of meeting with old friends and sharing a clink of glasses or making new friends—despite our wayward paths—and opening our hearts to the enticement of grace and a dash of bitters. 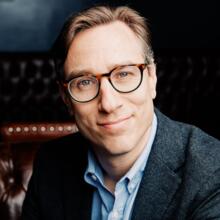 Derek Brown is an expert on spirits and cocktails who is based in Washington, D.C. He is the author of Spirits, Sugar, Water, Bitters: How the Cocktail Conquered the World.

@ideasimprove
Show Comments ()
Join the conversation: Login or create an account
Before you can comment, you need to update your profile to include your first and last name, as required in our comments policy. Then reload this page and you'll be set up for commenting. Update your profile
Show Comments ()
Comments are automatically closed two weeks after an article's initial publication. See our comments policy for more.